On Monday when I went out to ride Henry the weather had taken quite an ugly turn. The day before it was in the upper 70’s and sunny, then all the sudden it was cloudy and in the 40’s. Super. But I was determined to get in some pony time so out I went, in every jacket I own (all 3 of them). It should be noted here that Henry is the most rock solid steady horse I’ve ever owned. He is exactly the same horse every time you ride him, no matter how long its been since his last ride, no matter what the weather is, and no matter what the circumstances are. He puts up with me, he tries hard, and he generally wants very much to please and be a good boy. So when I got on and felt a little bit of a fresh and naughty feeling horse underneath me, I was amused.

I made the mistake of putting his sidepull hackamore on him and choosing to ride in the field. He proceeded to scout out all the tall grass from of the corner of his eye, put his head between his knees like an evil pony, and drag me to them. I was powerless to stop him and it took at least 15 seconds of yelling, pulling, kicking, and yanking for me to get his head back up. That happened several times… once even at a canter he tried to do a drive-by munch. The evil gleam in his eye was more like what you’d expect from a pony. A fat evil pony. That’s when I realized that to the casual onlooker it probably looked like a total Thelwell pony situation. Him blissfully dragging me to the tall grass and stuffing his face while I tried futilely but valiantly to stop him. I’m no match for a 16.1h Thelwell pony.  As I thought about it more I realized that pretty much everything about Henry goes right along with the Thelwell theme. Yes… my 7yo TB totally has an old lesson pony soul. He doesn’t buck or bolt when he’s wild, instead he drags me around to patches of grass. I present to you: Henry explained.

How he thinks dressage should go

Pretty much exactly how we look on cross country

Pretty much exactly how we look in stadium

His facial expression in every lesson

Because this is what he thinks I’m doing up there

How I feel about him pretty much all the time 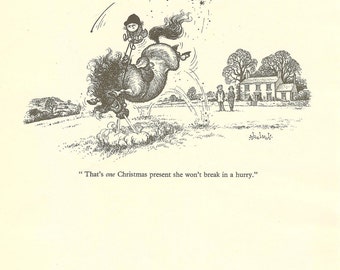 And that’s why I love him. Even when he’s naughty and drags me to the grass, and I’m up there kicking away like a ridiculous pony kid.

24 thoughts on “Henry is a Thelwell”