Having one of only a handful of clear stadium rounds on Saturday re-invigorated my spirits, and I woke up on Sunday feeling ready to rock and roll. The XC course was touted as being soft and a good move-up course, but it wasn’t quite as simple as I was expecting, which I’m ok with. There were a few max height fences and tough questions, including a huge down bank (cue some nail biting on my part) and two combinations. Overall though it looked very do-able and inviting. The course walk pics are from very early Saturday morning, so prepare for some grumpy morning Bobby.

The first four fences were all pretty small and simple, and a good way to get into a groove. Fence 1 was a little ramp a pretty short distance from the start box.

Then we went off into the gross scrubby brush (sorry west Texas, but you’re ugly as sin) and weaved around to 2, a little baby log. 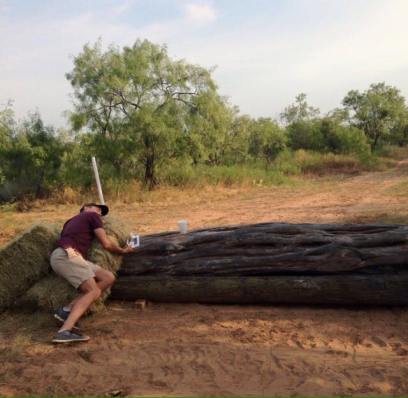 Followed by more weaving around to 3, which is the same little feeder thing we jumped in May at BN. 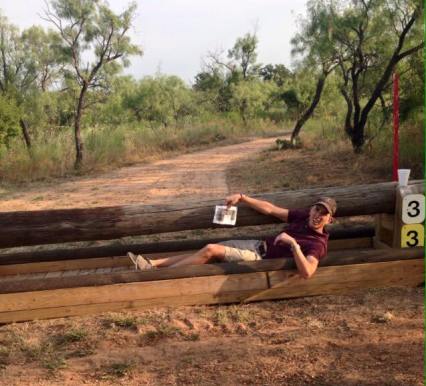 After 3 we popped out into a field and headed to 4, also a fence that we jumped in May at BN, just dressed up a bit. This is the field that has the windmill and the big metal chickens in it.

Back into the scrubby brush and weaving around to 5, which was a decent size fence set off of a very short/crooked approach and heading uphill.

We kept going up the hill and around to 6, a little… thing. With… dirt. And stuff. I don’t really know what to tell you.

After the enigma at 6 we had a sharp right turn and then went down into a crater, turned left and went back up out of the crater over 7. The fence itself was little and simple, this was more a question of control and steering and willingness to go forward, so we planned to trot it.

After 7 we had a decent stretch to catch our breath, then came back out into the field and rolled back left to 8AB. The A portion was a little rolltop…

And then it was a sharp right turn with 4 bending strides to the bank down. The bank itself was about 3′ and had a downhill landing that made it seem even bigger. This is the only thing on the course that I thought might give us a problem.

After the bank we turned right and rolled down to The Fort at 9, a nice inviting jump.

More weaving around more gross scrubby brush and then we popped out into the big front field where we had to take a hard right turn with a very short approach to 10abc, the water complex. The approach to this made it kind dirty, IMO, you would reeeeaaally have to get them back and get them turned and going forward again pretty quickly. But the A element was a nice inviting brush fence 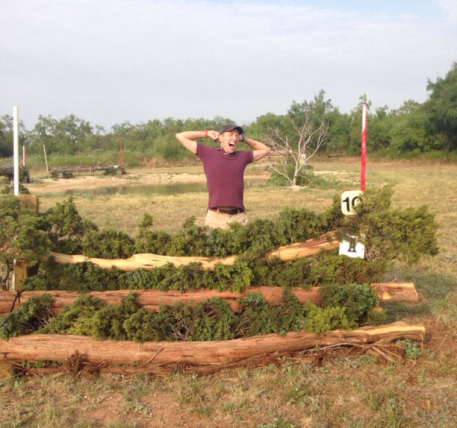 followed by B, the water itself 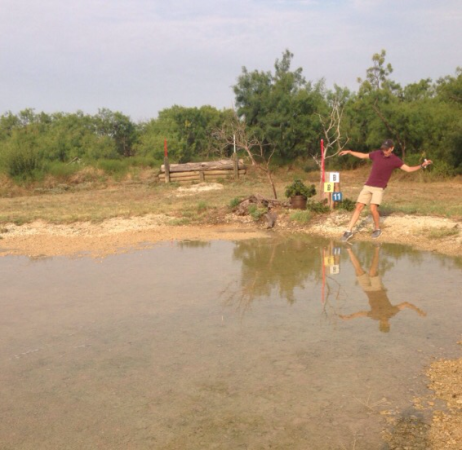 and then out of the water over the tiny log for the C element that was more like a speed bump than a jump.

There was a little bit of a breather after 10 as you turned back through the field and headed to 11, a tall but simple bench

Then back into the brush and down the lane to 12, another basic log fence with a bit of a downhill landing. 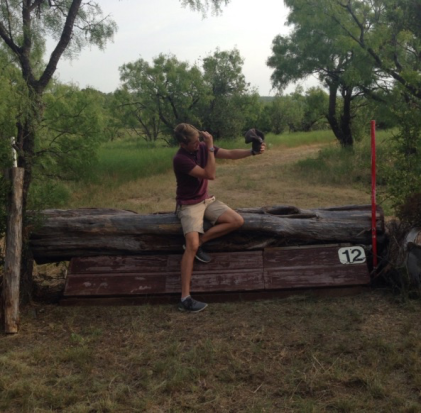 Fence 13 was the biggest and most visually imposing fence on our course, a maxed out house about halfway up a hill. I figured by this point in the course we would have a nice gallop rhythm and it would ride well as long as I kept coming forward up the hill and rode to the base.

More weaving around other fences and we finally popped out at the last, a little train car.

XC warmup was an even bigger circus than stadium warmup, so once again I trotted a couple laps, cantered a couple laps, jumped two fences, and stepped out to wait my turn. The first 4 jumps on course were small, so I figured those would get us into the flow well enough.

Henry came out of the box locked and loaded, taking me straight to fence 1 with plenty of enthusiasm. At this level I really want him to learn to WAIT and go to the base of the fence, not drag me to a flyer (which could turn into a train wreck if/when we go up the levels) so whenever I see the option for the close one vs the gap, I sit up and ask him to wait for the close one.

When we first entered the brush to head towards 2 I could feel him looking around a little bit. I told him he was fine and sat up and kept him in front of my leg, and he soldiered through the first 3 with no issue. When we popped out into the field for 4 he was staring hardcore at the windmill and I really had to stick my right spur in to keep him straight, but he went to the fence with no issue and jumped the snot out of it, because windmill monsters.

5 and 6 rode just fine, then we trotted down the crater and he said HAHA WHEEEEE NOW I CANTER AGAIN BUH-BYE MOM and basically deer leaped 7 while I stayed in the back seat and considered switching his XC bit to something other than a fat KK loose ring.

The plan for 8AB was to get the tiniest bounciest canter and deepest distance I possibly could to the A element, land, hang a right, and trot the down bank at B so I could make sure he saw it. He landed, turned to the bank, took me the four strides to it and jumped right off the damn thing without an ounce of hesitation, totally textbook. Well ok then. No more bank issues.

I had a little bit of a hard time getting him balanced back up for 9 (another point where I considered a new bit) but again he let me put him to the close distance and kept chugging. The turn to 10 was rough… he popped out into the field and wanted to just keep right on going, so I had to set him on his butt a little to get his shoulders turned to 10. Bless his honest little heart, as soon as he saw the fence he was locked on and went.

The last few fences were no big deal. The big house rode really well and he jumped it great just like I thought he would. Every time I checked my watch we were right where we should have been, so I just let him roll along and we crossed the finish with no problems. In fact, he was barely winded and was cooled down within minutes. Guess all that conditioning work has really helped.

XC didn’t claim nearly as many victims as stadium, but we did move up one more spot. More importantly, Henry finished on his dressage score again. That’s my real goal. We also got another completion at Novice toward our qualifications for the Novice 3 Day next year. My pony was super, I have no complaints. Henry officially has two Novices under his girth… now on to AEC at BN before we go back up to Novice for the fall season!

Oh yeah and as for Bobby? He won. Told ya.