On Friday when I posted what can only be called my opinion piece on the bloody mouthed horse situation, I thought it might get a little bit of attention. What I didn’t count on was it getting over 40k hits (and counting), lighting the Internet on fire, and causing me to spend most of my weekend trying to respond to it all. Those 10″ of rain we got here in Texas at least came in handy for something, since it was far too wet for me to ride anyway.

There are a few more things I’d like to say on the matter before I return to my regularly scheduled blog content, mostly in general response to a lot of the conversations I’ve seen on the blog comments, Facebook, and message boards.

Somehow a lot of people got stuck on my post being a snaffle vs non-snaffle discussion. If you’re getting hung up on that, you’re missing the much more important big picture.

Some defended the blood, saying it happens to everyone and isn’t uncommon or a big deal. I’ve been to a lot of competitions in my 32 years and never seen it before in my life. It’s never happened to me before either. Not to mention: if you think it’s ok for horses to be bleeding from the mouth in the middle of a competition, you must not like horse sports very much. Eventing already has a bad enough reputation for safety and horse welfare. What kind of repercussions do you think we will face in the future if we let bloody horses continue around course and do nothing to stop it? We have to police ourselves or someone else will.

In case you missed it, someone named Emily jumped to ML’s defense with her comment on the blog post, which was probably the saddest of all the comments I read:

You have no place to comment on another rider’s system. Especially not one who is as successful as Marilyn. As a groom at the FEI level I’ve seen the behind the scenes and Marilyn’s horses are not being abused in the least. They are strong horses and she needs control.
So you can comment after you’ve won a gold at the Pan Am Games, won a few Grand Prixs and gotten multiple horses to Rolex
#TEAMML

I wasn’t aware that bringing home medals and ribbons was justification for leaving a literal trail of blood in your wake. I think Aimee of Sprinkler Bandit fame said it best 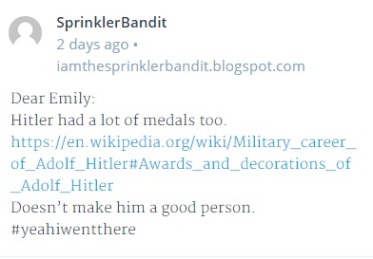 Our sport cannot survive mindsets like Emily’s. Any horse showing visible blood while on course should be pulled up IMMEDIATELY, no matter who you are or where you are. This isn’t just about ML… anyone should be pulled up. But a rider who has two bloody mouthed horses two weekends in a row should get extra close scrutiny. That’s not normal, especially not in conjunction with some pretty wild equipment setups.

I received story after story in my email and fb inbox from people who were at Fair Hill, all saying that many spectators clearly saw the blood and wondered aloud to each other why the horse was being allowed to continue. Is that what we want people to see and think when they come watch our competitions? A couple even went so far as to question officials, who assured them the horse was “fine” and had just bitten it’s tongue. That looks bad for our sport. Incredibly bad.

How it happened, while important to understand for the sake of prevention, should not factor into a decision to stop the horse/rider pair because it can’t be determined until after the fact. Visible blood should equal immediate mandatory retirement. Period. And I personally, as an eventer, would be 100% ok with that if it happened to me. I would WANT to be pulled up on course if my horse was bleeding so much that people could see it even as I was galloping past. No competition is worth risking his well-being or causing him discomfort. I would hope that the vast majority of my peers would feel the same. Not to mention that IMO a tongue bite serious enough to cause that much visible blood is not a minor injury at all. Mouth injuries hurt like a mofo, I think any of us can attest to that.

If we want to stop things like this from happening, IMO we have to target the specific wording of the rules regarding blood and we have to make sure they’re fully enforced. Having arguments on the internet about snaffles is a waste of time and energy. There will never (and should never IMO) be a rule saying we can only use a snaffle while jumping. So instead of arguing about bits on Facebook groups and forums until we’re blue in the face, why not channel our efforts into something that will actually matter? Email, call, and make yourselves heard to our governing bodies. Sign the petition. Submit rule change proposals. Help protect our sport.

And to those trying to threaten me, bury the photos, or have them removed – shame on all of you.

34 thoughts on “Well that escalated quickly”