I asked on my blog facebook page earlier this week what you guys wanted me to review next and Lorenzini won by a landslide, so here we go.

I have the “Schockemohle” version of these stirrups, which are Lorenzinis that have the Lorenzini logo on one side and the Schockemohle logo on the other side. Exactly the same thing just with some different branding, so don’t be confused if you see both on the internet.

I will be honest here and say that I mostly got these because they’re pretty. And they’re REALLY really pretty. The navy color is subtle but still looks really sharp with the rest of my stuff. I like nice, pretty things… so sue me.

Aside from just being pretty, they also have all of the features I’ve come to require in a stirrup iron.

I’ve realized over the years that I really have to have a wide footbed to be comfortable. My ankles are super jacked up, and trying to ride in a regular footbed iron has me in agony within 10 minutes. The footbed of the Lorenzini is nice and wide for sure. The cheesegrater pad is also very secure on your foot and makes it much less likely to move around. The footbed itself is angled ever so slightly on an incline, to help make it easier to put your heel down.

I was worried the Lorenzinis might be a little lighter than I prefer (my main complaint with composites) but they actually have a really good weight to them. Not quite as heavy as a traditional steel iron, but certainly nowhere near as light as a composite. The balance of the iron itself is really impeccable, just holding them and looking at them you can see that a lot of thought went into getting it just right. 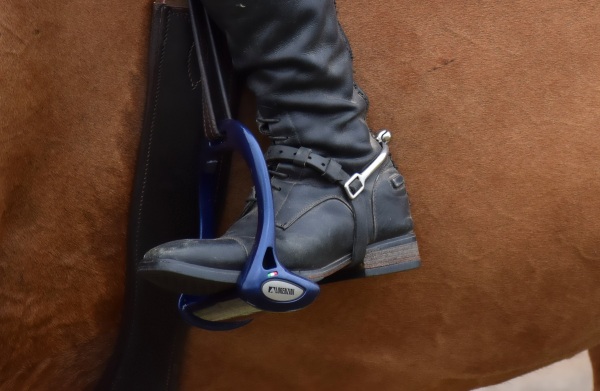 When I first used the Lorenzinis I noticed that they seemed to have less “give” than my Royal Riders, which makes sense given that those are Flex and these are not. I still found them comfortable though, and didn’t notice any negative change in my leg position or base of support. That said, I didn’t really notice a huge positive difference either. Sometimes I feel like it’s a little bit easier to have a more solid base of support under me, but I can’t say for sure, and I can’t tell if that’s because of the iron or not. The best I can say is that they certainly don’t hinder and they might be helping. I definitely think they’re light years better (for me at least) than a regular fillis iron or a plastic footbed composite, and really on par with the Royal Rider or MDC.

The only place they really fall short, IMO, is with the durability. I had heard before I bought them that they have a reputation for chipping and I am seeing that to be true. Oddly enough, not in the places I would expect. I whacked the crap out of my stirrup on the gate one time and the mailbox another time and they were left without even a scratch, yet I’m seeing some definite chipping at the top of the stirrup iron where the stirrup leather runs through it. Why here? No idea, it seems like an odd place, but it’s definitely happening on both irons. Luckily it’s really hard to see in that spot and the rest of the surface looks ok so far. 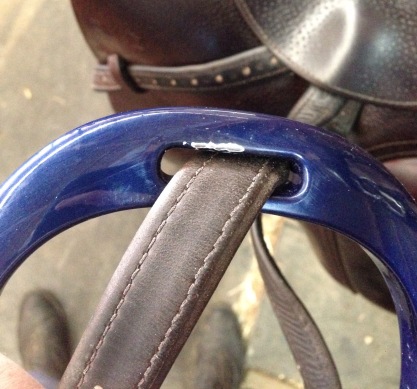 They do have some matte finish ones out now that are supposed to be less susceptible to chipping… I suppose time will tell. Also, the little orange rubber dot above the Schockemohle logo fell off within the first couple weeks I had them. Stronger adhesive needed, perhaps? Minor thing, but still… at this price point it feels a little cheesy for anything to be falling off. They retail at $260ish, but I snagged them on sale for $145, so I’m not as upset about it as I probably would be if I’d paid full price.

Overall I think they’re nice irons. They have the prettiest colors on the market (if you’re into that kind of thing, or regular silver if you’re not), they’re secure, they’re comfortable, the weight is good, and my ankles are happy in them. The chipping is the only real drawback I’ve found.