As I mentioned last week, the days leading up to Holly Hill were wet. Really really wet. We had a ton of rain all week in Texas, which meant the horses were stuck in their stalls and our riding was limited to whatever we could do on the narrow strip of grass beside the road that was firm enough to ride on. I figured I might have a slightly feral animal by the time we got to Louisiana on Friday. 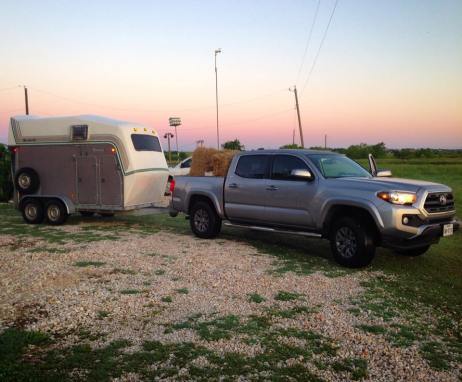 Bobby and I were loaded and on the road before 7am, and the drive was pretty uneventful. We stopped about halfway, unloaded the boys, let Halo graze and blow his nose (he has a condition that makes him aspirate his food, so if he’s unable to clear his nose/lungs on a regular basis he’s prone to pneumonia), offered them water, and let them walk around.

Once we arrived at the grounds we found our stalls, unloaded, and let the boys settle in while we grabbed some tacos at the lunch buffet (I love shows that feed us). Then we hopped on and walked out to the dressage warm-up area to ride. As soon as I picked up the trot I knew I had a wild man on my hands, so I just went straight to canter, got into a half seat, and let him go around and around the field until he quit leaping and squealing. No joke – he was actually squealing. Zero dignity.

He did settle though and we got some good work at the end, so we decided to just leave him with a little edge and hope that it worked out for good instead of bad the next day. We bedded the boys down, walked our courses, had some dinner (free food again, Holly Hill is the best), and then went to bed. The next morning Henry still had a bit of a wild man look in his eyes so I opted to leave the spurs off, but he was actually really quiet in warmup.

I have to be honest, I was a little worried he would lose his shit in the test. There were 4 rings all in one grass field, very close to each other. There was a whole lot going on, and in the past he’s not done well with that (ahem Greenwood). I have to give him much praise though, he marched right in there like a pro and didn’t look at a thing. He was rideable, he was professional, he was steady, and overall just a really good boy. 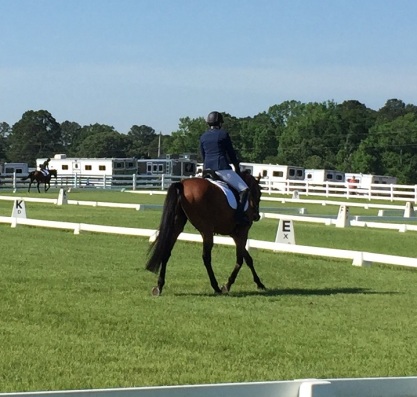 I messed up my first circle completely… I’ve gotten so used to my trajectory for a 15m circle that I came off the rail with way too much bend and kind of had to leg yield my way back out to a 20m path. If you’re into lopsided ovals, it was super. But his transitions were decent, his free walk was good, and the second trot to canter was very steady – we’ve struggled a lot with that so it was nice to finally get a good one.

Nothing about the test was brilliant, but nothing was bad either. Overall really consistent and he stayed totally “with me” mentally the whole time. Very unlike last year where most tests were just me trying to tiptoe through it without him getting tense and upset. We’re close… we’re really really close to having great scores. At this point it’s just a matter of me riding him better.

I was still expecting around our usual 35-36, since I was familiar with our judge and knew she was not exceedingly generous. Really I was just hoping to end up around mid-pack, but either way I was happy with Henny. He’s grown up so much since last season. 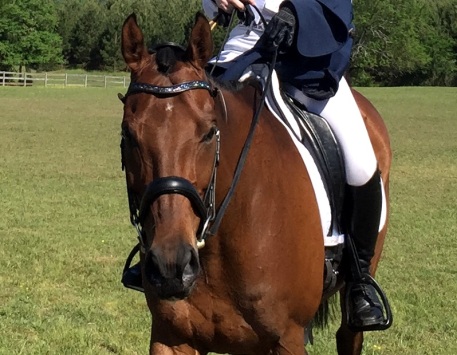 I was pretty pleased to see our score of 33, and even more pleased to see that it put us tied for 6th out of 23. It was a really stacked field of super nice, experienced horse and rider teams, so to be up there among them was exciting. Finally, all the work is paying off. Now I need to get my shit together and stop leaving easy points on the table.

But there wasn’t much time to bask in our mini taste of almost glory, because we only had a few hours until CROSS COUNTRY…