Ah, intuition. I said on Friday that for some reason I had the nagging feeling that we wouldn’t get the all clear, and I was right. The good news is, we took a 90% sound horse and turned him into a 95% sound horse. He’s definitely better. Unfortunately, he’s still not 100%.

We took more rads of the injury site and compared them to the original ones from a month ago. The tiny crack was gone and he’s laying down good bone on top of it, but it’s still in the process of healing.

Luckily the external wound track on his injury has closed up, so we were able to do more diagnostics that we couldn’t do last time for fear of introducing infection to the bone.  We blocked that area to see if it would make him 100% sound, but it didn’t.

Oh, and we had to pause mid-exam to put a shoe back on because of course he pulled it and then proceeded to be off on the barefoot foot when we jogged him. Thank goodness for a vet that used to be a farrier. 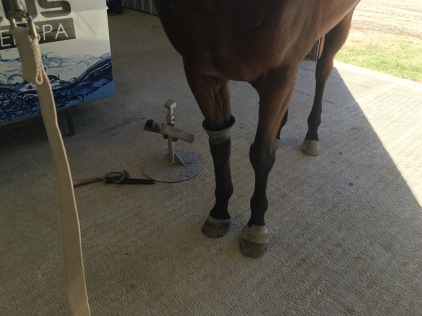 The only part of Henry’s regular maintenance that we haven’t been able to do throughout all of this is inject his left ankle. Again, last time he didn’t want to stick a needle anywhere near that wound, especially not one that was going into a joint. So, short of blocking our way up the whole leg (which would probably take a crew of four people because he is AWFUL) we figured it was worth a shot to do his maintenance injection in the ankle, give him a couple more weeks, and see if that brings him the rest of the way sound. If so, great. If not, we’ll have to do some harder diagnostics because we sure can’t find so much as a pimple anywhere else on that limb.

The vet doesn’t think it’s necessary for him to stay at rehab any longer. He’s cleared to start easing back into turnout and riding, but with a lot of specifications, mostly because that bone is still healing and there’s still a chance that it could turn into a sequestrum if we aren’t careful.

He doesn’t want Henry to go straight back into his usual 12-22 hour a day turnout, lest we put too much stress on all that new bone. He’s not allowed to gallop around a lot in turnout for the same reason, so if he DOES start acting dumb, he has to be brought in. And, more specifically, he can’t be ridden on a hard surface for at least the next couple months, until all the bone settles. He also wants the leg wrapped and/or poulticed after every ride for the first few weeks.

So, this creates another problem for me. I don’t really want to keep him at the rehab place if he doesn’t need to be there, because $$$. Plus they don’t really have much in the way of turnout, nor is their ring finished yet. But the specifications that the vet outlined are pretty impossible for our normal barn to accommodate as well… it’s a small private barn, and there are times during the day when no one is there. He runs around a lot in turnout with Halo, and it’d be impossible to always have someone able to bring him in when they get started. The ground is also pretty hard out there since we’ve not gotten much rain in a while, and it’s the type of soil that gets very hard when it’s dry. Henry is just way too high maintenance right now for that situation.

The vet gave me the names of a couple people with suitable facilities that might be able to accommodate us for a month or two until he’s totally healed. I’ve got some calls to make today, and probably some begging to do. Fingers crossed we can find someone able to take us on for a little while. The adventure continues…

23 thoughts on “The Vet Check”