I think it’s close enough to the end of the year where we can officially call it. Pretty sure we can all agree that we’re ready for this dumpster fire of a year to be over anyway, right? Let’s usher it on out by taking a look at how Henry and I did with our 2016 goals.

Qualify for a Novice 3-Day – We did it in our first recognized show of the year at Holly Hill!

Compete in a N3D  – It took a lot of budgeting, but we made it to Flagstaff, AZ to run the Novice 3 Day at Coconino. Cross Country day was the most fun I’ve ever had on a horse in my life. 100% worth it. 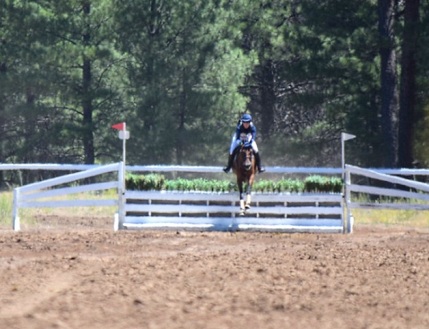 Place at N3D – This one we did not do, and it’s no one’s fault but my own. A couple of small mistakes (one in dressage and one in stadium) cost me a ribbon here. Henry was super though, so although I was super disappointed in myself, I had to let it go.

Move up to Training – This one isn’t so clear cut. Henry ran two Trainings with my trainer (placing 1st at one and 4th at the other, with double clear XC at both because Henny), and I did a Training derby (we won our first TIP award!) and Combined Test with him. We signed up for a recognized Training in the fall but ended up having to scratch due to a minor injury. Now we’re slated to run our first Training HT together in January. Maybe 3/4 credit on this one?

Make an actual 15m circle – Not that my 15m circles are perfect by any means, but what was a major struggle a year ago is nbd now. Proper bend is amazing.

Go to at least one dressage-only show – Yeaaaaaaah no, sorry DQ’s. Technically I did try this, I sent an entry in to a dressage only show that said they’d let you do USEA tests, but then the organizer called me and said they in fact weren’t offering that anymore. I don’t have room in my brain for more tests, so no.

Keep Henry happy and healthy – Despite my best efforts, he kicked a fence in turnout and had a teeny tiny fracture that relegated him to aquatherapy for six weeks and caused us to miss the whole fall season. Really he’s been quite spoiled this year, between rehab and acupuncture and chiro and massage… I’ve spent a fortune trying to keep him happy and healthy. Go figure that he takes himself out by kicking a damn fence. This one was out of my hands.

Get the trailer 100% road-worthy –  After some new tires, new walls, new pads, some roof work, and a paint job, Betty White was my leading lady this year for sure. I can’t even imagine life without a trailer anymore. I’d be screwed.

Be more fit – I actually did this for once! I’m running regularly now and have a half marathon planned for January.

Be better about budgeting  – I mean… I’m not destitute yet, so? For real though, I’ve made progress this year, despite some huge expenses (ahem new saddle). I managed to make the two week trip to Coconino work, Henry got to spend some time at the spa, and I didn’t go into debt over it. I think I’m getting a little better at balancing all of this and figuring out how to make my plans fit into my budget.

Buy a truck – My car died right around New Years, so I finally got my upgrade. She’s not fancy by any means, but she is a super important piece of my puzzle and I love her to bits.

Do a little better about balancing horse stuff with real life – I think I was better at this than normal. Probably because Henry was out for most of the fall and I had no other choice. Whatever, still counting it. I will say, at some point I should probably take a “vacation” that isn’t horse related. My only trips this year were Flagstaff for shows, Philly for AETA, and Maryland for the Fair Hill YEH Championships. Which… to me all of that sounds amazing but I suppose at some point there should be non-horse vacation? Like… with the SO? Meh.

Get another tattoo – My dad and I got tattoos together, because we’re cool like that.

Live boldly –  I feel like, for the most part, I went out and did the things I wanted to do, even if I was intimidated by it or if it seemed impossible, so I’m giving myself the green here. As far as the blog goes, I’m still over here trying my best to keep it open and honest and real. That will hopefully never change. Even though our fall season didn’t go as planned, we still did a lot this year. Ok, maybe not in the way of recognized shows (we only did TWO!) but we did everything from indoor eventing to a jumper show to a long-ass road trip. More importantly, we learned a lot. Training looked borderline deadly at the beginning of the year, and now it looks totally do-able. Henry is a lot more well-trained and our partnership has only gotten stronger. More importantly, I think we both had a lot of fun. It might have had it’s ups and downs, but overall I think it was a pretty good year for us.

Thanks to all the people and companies that have supported us, followed along, and provided encouragement… you are more valuable to us than you know. On to 2017!