Nothing like starting a show day with an 80% chance of thunderstorms and a 7:42 dressage time.

It was kind of a gross, dreary day from the get-go, but luckily the rain showers that passed through around 5am were long gone by the time I got on Henry and headed down to dressage warmup. Our goal for this show was just to try to keep him as quiet and relaxed as possible, keep myself PRESENT, and see how much I could ask for in the ring. We walked for a while, trotted a bit, then did some canter with a few lengthenings (remember when I used to not be able to canter in dressage warmup?). Being a one day show, and knowing that dressage is not our forte, we opted for a pretty short and sweet warmup. Just no point in anything else. Full disclosure, I don’t have any media from dressage, so feel free to just scroll right on down to stadium if you don’t want to deal with my word vomit. Here’s a picture to hold you over until you make it down that far:

He went in the ring a little bit “up” but overall I thought it was a passable test. He got heavy after the first canter and I never was really able to get his balance back (uh, maybe sit up?), and most of the trot at the beginning was done with him keeping one eyeball on the XC jumps nearby. We haven’t had a dressage lesson since August, and neither of us have done a test since July, so I expected it to be rusty and it was. But there were two things I really LOVED:

1) I stayed present and I didn’t just turn into at total blob. At one point in the canter lengthening I even smiled. Whaaaaaat, me smiling in dressage? Hell hath frozen over. I was amused at my horse, who was hoping that we were going to gallop out of the ring and over to cross country (hence why there wasn’t much of a lengthening, lest we exit the arena unexpectedly).

2) After we halted and left the ring, Henry wasn’t chomping. Normally by the end of the test his brain is pretty maxed out and he’s quite tense when he leaves. And when he’s tense, he chomps his mouth at a really impressive rate. There was none of that this time, and he went back over to the warmup and stood fairly still for a few minutes while we talked to Trainer and watched Bobby go. 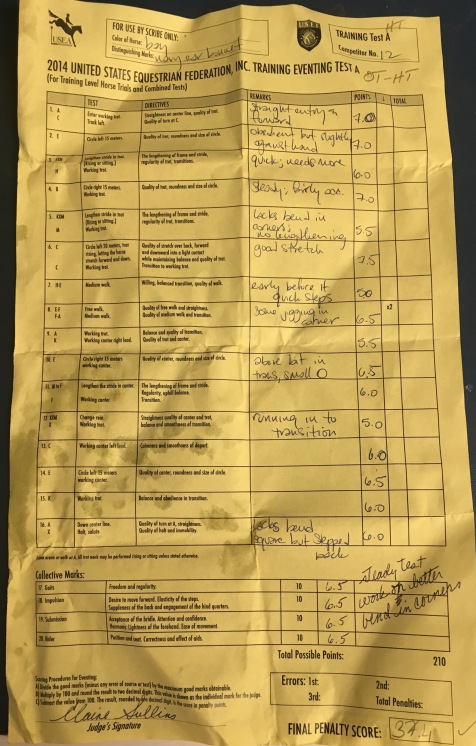 Those two things alone are huge wins in my book, and exactly what we were there to do. I was just aiming for a score under 40, and we got a 37.4, so I was totally fine with that. Somehow our highest score was the stretchy trot circle, which I will happily take.

We had a couple hours in between dressage and stadium, so Bobby and I went over and walked the course one last time. It was set for Intermediate/Preliminary, and I have to thank Trainer here for getting me comfortable with bigger fences, because their jumps didn’t look that big to me. Ah yes, this is why you always school higher than you show. I felt pretty good walking around their course knowing that ours would be two holes lower. For some reason leading up to this show I had been more freaked out about stadium than anything else.

While we were tacking up we checked the radar and saw a big ugly cell headed straight at us. Cue a very quick and abbreviated warmup, hoping to get through stadium before that thing hit. We did a few laps of canter, hopped over the crossrail once, the vertical once, then the oxer once. Henry was getting to the base and jumping really well, and I was actually not pulling, so I quit with that and went up to the ring.

We trotted in, halted, then picked up the canter and headed to the first fence. He went right into a really good rhythm and all I remember thinking as we cantered down to fence 1 (a single oxer) was “Oh thank god, these jumps look little!”. I dunno why I thought they’d look big, but I was really glad they didn’t.

We hopped over the first few fences and I’m not really sure where this horse came from, but Henry was jumping like a total freak. He was coming off the ground with so much power that it was all I could do to stay with him. I whoaed a teeny bit too much in the corner before the first double at 5AB and thus had a bit of a long two stride, which made 6 come up a short. He hit it, but it stayed up. The tight rollback to 7, which I’d worried about the most, actually rode really well.

Although he jumped 7 so hard that (aside from almost gouging my own eye out with the end of my whip) I pulled a little to 8, then landed and pulled a little more to 9AB, the last double. Instead of just letting him come forward out of the corner I tried to cram one more stride in and Henry, bless his soul, had to climb out over the oxer at B. That mistake cost us 4 faults, but… whatever. We did it, the jumps looked small, he was jumping amazing, and I made DECISIONS (ok that last one was a bad decision, but at least I made one).

It started raining during Bobby’s round, then as we were headed back to the barn the skies finally opened up and it poured buckets. Lots and lots and lots of buckets. Once the lightning started they held the show, and we all just stood around watching the XC course turn into one giant lake. By the time it stopped raining there was no doubt – XC wasn’t happening. The whole thing got turned into a CT, but it was the only right decision to make. No way the footing would have been safe out there, especially back in the woods. I was bummed at not getting to run around XC, but not at all bummed about not having to do it in the mud. Henry is drilled and tapped, and I had studs with me, but still. There will always be another day, and I’d rather not run our first Training XC in the slop.

Overall I was happy with the day. I stayed calm, had fun, and Henry was great. We definitely have more work to do to get everything more polished, but that will come. After a long 6 month break, it was great to be back!  I may have already sent in my entry for the February show… fingers crossed it’s a little drier.