I made the drive back up to Lamesa this weekend to see Presto again. I’m cringing at all the miles I’m putting on my truck with these 10 hour round trips (think I’m gonna try to rent a car next time) but it’s totally worth it to visit the little nugget. While I was on my way up there I got this text from his vet: 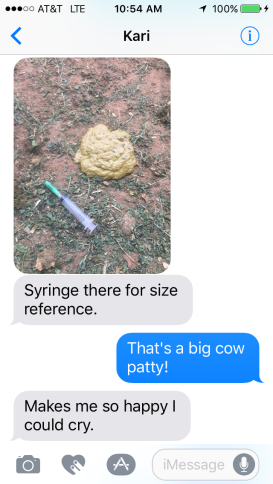 I just love her. She’s so invested in Presto, and it makes all the difference. Especially because she’s spent the last 16 days medicating him every 6 hours pretty much by herself. She’s gotta be tired of seeing 4am by this point. But y’all – look at how great he’s pooping!!! It’s not normal baby poop yet, but it’s getting close.

When I rolled in on Saturday he was up and nursing with gusto. Definitely a much stronger, happier baby than I left the weekend before. He still does everything a little bit in slow motion compared to a “normal” foal, but his curiosity is back and he likes to watch all the goings-on at the clinic.

Sadie seemed to be feeling a little neglected, so I ran up the street to the farm supply store and bought a curry comb and a brush. I spent a good 45 minutes grooming her and giving her mints, which seemed to make her happy, and then Presto inserted himself for some grooming too.

I hung out for a while, because at this point it’s such a privilege to still have him that I can watch him for hours without getting bored. My main observation after sitting there all afternoon was that he’s eating like a MACHINE. They’ve been increasing his non-muzzled time every day, and he takes full advantage. Developmentally he looks more like a 3 day old baby than a 2 1/2 week old… obviously his growth kind of came to a screeching halt when he got sick, as his body was occupied with trying to stay alive instead of filling out. It appears that he’s trying to make up for lost time with gusto, because he eats pretty much non-stop. Between nursing and experimenting with hay and a few nibbles of Sadie’s grain, he’s absolutely going to town.

He’s still the same goofy, sweet baby that I remember from his first couple days of life, too. 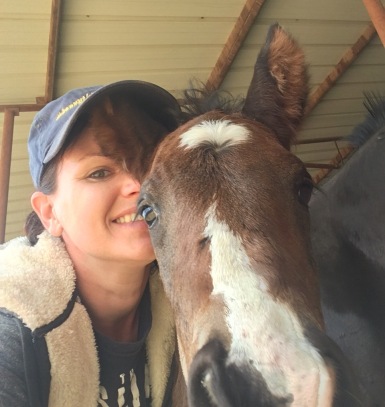 By the time I left on Saturday he had finally laid down to nap. It’s like he spent so much time laying down while he was super sick that he really DOES NOT want to lay down anymore until he absolutely has to. Stubborn little dude.

On Saturday night a storm and cold front blew through, and it was COLD on Sunday morning. Cold and wet and gross. I stole one of Michelle’s baby blankets and hightailed it up to the clinic early. Little guy doesn’t have much fat to keep him insulated, and I’d rather he not waste calories trying to stay warm.

I was greeted with a loud, trumpeting whinny (kid has got some lungs on him) but when I put the blanket on he was PISSED. He took off cantering a couple laps around the pen, trying to fling it off, then slipped and almost fell so decided to just stand there and glare at me instead. You’re welcome, Presto.

I dunno if it was the cold weather or if he was just feeling better, but he was quite active. He was aggressively nursing (like for real I felt a little sorry for Sadie, all the head slamming into her udder seems unnecessary), kept backing his butt up to the wall and threatening to kick it, exploring and stomping through the puddles in his pen, etc.

And then, quite deliberately on his part, he backed that curly little butt up and NAILED me in the shin with a foot. Turd! But the fact that he feels good enough to be naughty… I was ecstatic. Granted, a little offended that he kicked ME first instead of the vet (I mean come on), but that’s ok. We’ll call it a love tap. He thought that was a pretty fun trick and tried it a couple more times before I finally had to be a responsible parent and get after him for it. He was pretty undeterred by my discipline though. He’s definitely his mother’s child.

When it was time for his morning meds I had to hold him still for her to inject them into his IV catheter because he was too full of beans to willingly stand. And we’re all totally fine with that.

Overall he’s doing well. His vet made sure to say “He’s not totally out of the woods yet, but he’s doing good.”. She’s conservative with her optimism, which I appreciate. The real test will come this week as they start backing Presto off all of his injectable meds. He’ll be on his oral tummy stuff for a while, but it’s time to start weaning him off all the antibiotics and other stuff. Fingers crossed that he keeps doing well without it!