Some of you may have noticed me mention “Uncle Skeeter” in passing in a few of my Presto posts. Since Skeeter has now proven that he is, in fact, a very important part of the Presto family, I thought it was only fair that he get his own little post.

When they first moved Sadie and Presto to an outside pen at the vet clinic, I felt sorry for whatever horse might end up next to them. Momma bear tends to be… well… a bear when it comes to her babies. She even gave serious what-for to her BFF Lissa at home when they were in paddocks next to each other with their babies, and there’s no one in the world that Sadie loves more than Lissa. So I was surprised to see that she was actually quite tolerant of Skeeter, the Cushings gelding that was in the pen next to them. She made some ugly faces at him the first couple days, but Skeeter was quite undeterred by her theatrics and that was pretty much the end of it. 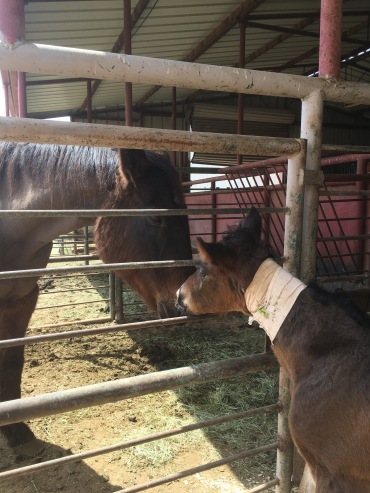 Now Skeeter and Presto love to hang out. Presto will go over there and stick his nose into Skeeter’s pen to sniff him and say Hello. And Skeeter has taken it upon himself to be Presto’s protector. Any time a new horse gets put into the pen on the other side of Skeeter, he makes sure that the horse knows they have to stay at the opposite end of the pen from wherever Presto is. Especially that one polo mare that was there for a few days and, according to Skeeter, kept making very inappropriate eyes at Presto. He kept her herded up into a corner the whole time.

Skeeter is pretty severely Cushings, and has some kind of wound on his face. I don’t know much about him except that he’s been ready to go home for a couple weeks now but no one has come to pick him up yet. I think he’s just someone’s not-very-important pasture puff. I’m kinda glad they’ve left him there, though, because apparently Sadie thinks he’s a crucial family member, too.

They tried to move Skeeter somewhere else last week so they could thoroughly clean his pen (Cushings = pees a lot) and Sadie absolutely lost her mind. To the point where they just turned around and put him back in the pen because she was about to SadieSmash the barn to smithereens. I guess she has decided that Skeeter is the only approved babysitter and he isn’t allowed to leave.

I jokingly (or not) told Michelle that we may end up having to take Skeeter home with us if he still hasn’t been picked up by the time Presto is ready to come home. He seems perfectly suited for the role of babysitter.