On Saturday the mares and babies arrived at the breeding farm in Boerne where they’ll be staying until the mares are re-bred. Naturally I jumped at the chance to go see Presto and Sadie while they’re relatively close… it’s only two hours to Boerne instead of 5 hours to Midland, where they normally live. A four hour round trip is significantly better than 10.

By some masterstroke of impeccable timing, I managed to get there just as they were pulling into the driveway. We unloaded everyone and stuck them in stalls for a bit so they could relax (which the mares did not do because they were idiots and freaking out because they were separated). The babies seemed a little tired, but otherwise no worse for wear after their long trip. Presto should be a pro at this trailering thing soon, this was his 4th trailer ride in the 5 weeks he’s been alive.

After they had their dinner we turned them all out in the pasture with the other broodmares and mare/foal pairs. That was initially a little exciting, but Sadie and Lissa kept themselves segregated and made sure the others knew to stay away from their babies. They stretched their legs and then finally drank some water and settled in to graze. The grass here in Boerne is legit compared to Midland.

Once they’d had some time to settle I went back out to play with Presto. He’s still the cutest. Zero bias here, of course.

He’s definitely put on weight in the couple weeks since I saw him last. He’s starting to fill out and look normal again, to the point where he’s borderline chunky looking in a few places.

Next to Liam he still looks a little small, but compared to the other two foals in the pasture (who are also close to him in age) he’s normal size. Liam is just a monster, it’s useless to try to use him as a valid comparison. Overall though, Presto is almost to the point where you can’t really tell anything was ever wrong with him, aside from all the hair he’s missing on both ends. His neck from where his IV was, and his butt from where the diarrhea singed off all his hair. BUT, he’s about to start molting that foal coat, so soon he’ll be dark like Sadie and it’ll all blend in then grow back.

He’s still super friendly and curious and likes attention, so nothing has changed there. He even tolerated lots of kisses from his 2 legged mom, which thank goodness he doesn’t seem to mind. 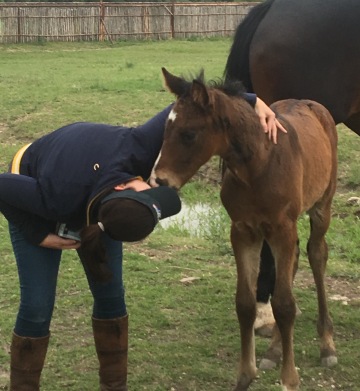 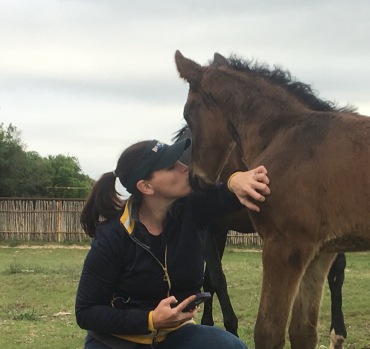