Saturday was an early morning. I was up at 4:15, pulled out of the barn at 5:15, and we were parked, unloaded, and Henry was happily munching his hay at Pine Hill by 7:30. I picked up my packet, dropped off the raffle items I’d brought (thanks Mango Bay and Majyk Equipe!), and slowly got Henry ready.

The morning was pretty cool with a little bit of a breeze, so I thought Henry might be a bit up. Yeah no. Our warmup was fine, but I was having some trouble motivating him enough to really get him pushing with the inside hind, especially to the left. When he finally did start pushing and connecting into the outside rein the quality of his trot improved tenfold, but I knew I’d have my work cut out for me in the ring.

The good thing is, not so very long ago I had to ride my test as if I were sitting on a stick of dynamite. He’s still sensitive and tense at times (pretty much just in the walk and transitions these days), but overall I can ask for more now. Sometimes he responds, sometimes he doesn’t. He seems to have a particularly hard time in this arena because the corners are quite deep… we get bogged down a lot and he doesn’t want to go IN them at all.

For the test itself he was obedient for the most part, but I got nothing on any of my lengthenings (he politely declined, thank you) and I kept losing his hind end a bit. The medium walk was shuffly and the free walk was hurried, both of which she really nailed me for. Ouch, double coefficient.

On the plus side we at least got the one 8, and his other best scores (a 7.5 and two 7’s) were for things we’ve historically been shitty at – the stretchy trot and the canter/trot transitions. THAT part did make me pretty happy. Note to self, next time work on the walk and the lengthenings more in warmup, because ouch the 5’s hurt. Also – time to put the spurs on.

Either way, I was pleased enough with his test, because he’s still working light years better than he was last summer. If I could actually take some dressage lessons again at some point, it would probably really help. Or if he hadn’t had like 3 of the last 6 weeks off because my life has been nuts. Details.

The judge was not very charitable, but she scored everyone that way so it was fine. We got a 37, and the best score in either Training division was 33. Her comments were pretty spot on (and pretty detailed, for a dressage test). Yes our lengthenings were non-existent, yes the walk work was not good, yes he’s on the forehand a lot. Henry’s butt is literally 2″ higher than his withers and I still sit like a jumper convert, so we are no strangers to the forehand.

While it definitely wasn’t our best test, it was also far from being our worst.  We were sitting in 6th after dressage in a fairly tightly packed group of scores, which is fine, I’ll take that. 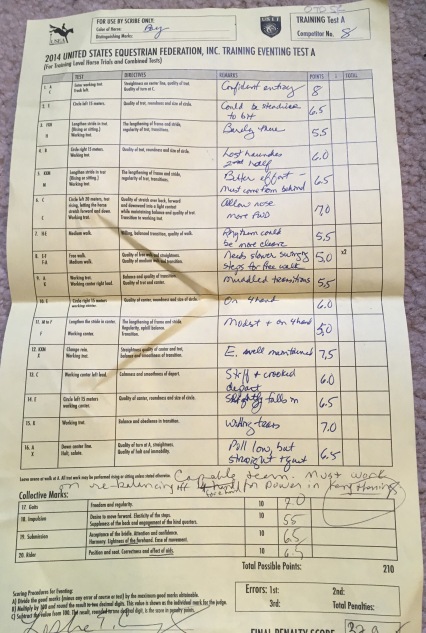 Honestly if Trainer had let me withdraw and go home at this point, I would have. I was tired, and once I walked the jumping course and saw the down bank, I was pretty certain that we were toast. But we’ll cover all that tomorrow…