Every year when Badminton rolls around, Bobby and I follow along online and dream about how fun it would be to fly over to jolly old England and attend in person. It is, after all, the ultimate 4*. The paramount event.

Last year, watching the carnage (and there’s no other word for it, that’s exactly what it was) at the Vicarage Vee took some of the wind out of my sails. That fence was really hard to watch, and it punished anyone and everyone who didn’t meet it exactly right.

This year saw a new course designer and no more Vicarage Vee. I was hopeful we’d see an event just as big and gnarly as Badminton is known for, except hopefully without the carnage. Alas, that last part was not to be.

Hung legs were everywhere. I stopped counting after 14. Some of them resulted in horse falls, a few rotational or awfully damn close to it, but miraculously a lot of these horses were able to pull out their “fifth leg” and save themselves (with the assistance of many a broken clip). Still… it was hard to watch. Horses don’t get to this level if they have a tendency to hang a leg (no one wants to die), so something was contributing to them either getting to the questions wrong or misreading them. 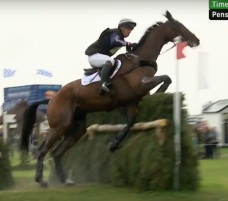 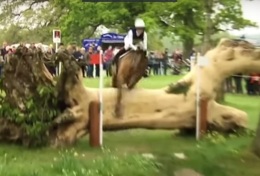 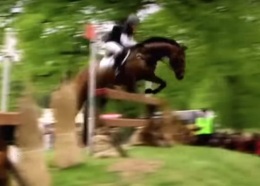 Two spots in particular that made me cringe were the The Lake and the PHEV Corral. At The Lake, the distance from the bank up to the brushed jump did not work out well for most people. I don’t think the horses jumped the bank the way the designer thought they would, and as a result the distance was off. There were a lot of runouts here, but also some scary falls. At the Corral, I hated having very upright fences, the rails of which were quite square and the second of which was on a hard angle, toward the end of a course like this. There were many horses that just got in a bit off-stride and couldn’t get out of their own way, resulting in a hung leg.

I love eventing because it’s hard, and it’s gritty, but I don’t love seeing genuine horses make mistakes and get punished with a fall. For me it takes all the horsemanship out of it. That’s not to say that I want XC to be easy – heck no. It shouldn’t be a dressage competition. But the Rolex course seemed to do a bit better job of turning mistakes into glance-offs or refusals, whereas Badminton sent a lot of horses and riders into the turf. Granted, it’s always done that. This is nothing new.

Bobby and I both didn’t make it that far into the coverage before we lost heart and closed it. It doesn’t leave me with a warm happy “omg eventing is so awesome” feeling. Instead it made me feel… uncomfortable. I lost all desire to go watch in person.

Did anyone else watch? What were your thoughts?

52 thoughts on “I don’t have the heart for Badders.”