It’s that time of year again… 90 degrees with 9000% humidity, and it’s only going to get worse. Anyone who knows Henry is aware of his heat intolerance issues. He sweats like a champ, he just can’t breathe, especially when it’s humid. By this point I’ve had 3 different vets look at him over 3 different summers with no real solid answers. Last summer I also tried putting him on a supplement called Lung EQ, hoping it might help, but really the only thing that made a difference was going to Arizona where there was no humidity.

Of course, it’s not really feasible to just up and go somewhere else every summer. He’s been manageable enough at home, I just have to be careful when I ride him. By this point I’ve gotten it down to a science, really, and have a whole box of special summer stuff for Henry. I haven’t given up trying different things though, so every winter I think about what else I can try, and every summer we give it a go.

This year we’re trying two things: body clipping and an Omega Alpha Equine supplement called Respi-Free. The body clip was an easy decision. Henry is naturally a thick-coated horse, and even his summer coat is more like what you’d expect on a shetland than a thoroughbred. His front end was pretty slick, but his butt was hairy, 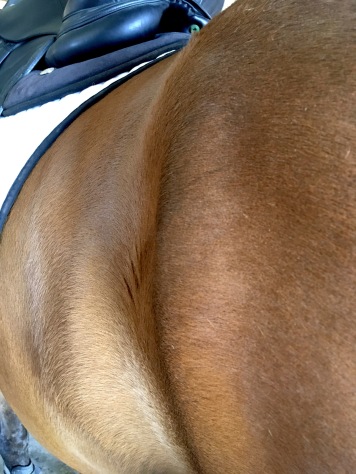 I’ve never body clipped one of my horses in the summer, so I wasn’t sure how it would look. Before I started I even had the thought that I might have to go buy a Fine blade, because his neck and chest hair might not be long enough for the Medium. HA!

There was plenty of hair. PLENTY. Once I started I was shocked at how much was peeling off. He accepted his fate without much protest, and an hour and half later I had a much sleeker horse and a huge pile of “summer coat”.

I also started the Respi-Free the same day, which is the supplement that was recommended to me at Rolex by the Omega Alpha rep. Basically it’s a combination of all of their other breathing supplements, intended for horses with general respiratory issues and/or horses with COPD. All 3 vets have ruled out COPD, but the “general respiratory issues” part does apply. In the summer anyway. Respi-Free a liquid supplement that contains natural cough suppressants (which, Henry never coughs, but…) and bronchodilators. I hate supplements in general, liquid supplements specifically, and liquid supplements that have to be given by dosing syringe are like top of the chain kind of hatred. But I’m willing to try anything to make summers easier for him, so I figured we’d try a bottle and see how it goes.

So far, so good. We’re only a few rides in since the clip and starting the Respi-Free but he’s definitely breathing a little easier. He’s still puffing when we’re done riding, but he actually seems able to decrease his respiratory rate on his own as we walk out (before it really wouldn’t go down until I got off and started hosing). I don’t know if that’s the body clip at work or if the Respi-Free is actually helping, but I’m not going to complain. We’ll see how things go over the next month or two!