Everybody knows what a snob is. The first image that comes to mind is some well-to-do, hoity-toity girl that thinks she and everything she likes is better than the common plebeian simply because it’s fancy and expensive. But what about the flip side of the coin?

What about the people who are super, um… frugal, who think that they’re better than people who spend lots of money simply because they don’t spend as much money? The internet has dubbed it reverse snobbery and, from what I see at least, it seems even more rampant than snobbery of the traditional variety. Examples, you demand? No problem.

All 3 of which I’ve seen within the past month. Look, I’m horse poor. I get it. I can pinch a pinny so hard it’ll give Lincoln a black eye. And I will flat out tell you that of course I’m envious of people who have the means to go to every horse show, buy new saddles all the time, go to Europe and buy a new horse every couple years, etc. But it’s their money, and they can do whatever they want with it. If I think I’m somehow better than them because I try to do the same things with less resources, that’s still snobby, just of a different variety. I’ve been guilty of it plenty of times in my life, but really I should be thanking these people for helping keep this industry afloat because lord knows my broke ass ain’t.

It’s an even more ridiculous viewpoint to take when you look at the fact that we’re all equestrians. We’re all involved in an elite sport that features walking money pits. To think that you are somehow better or more authentic than someone else simply because you spend less money on your particular walking money pit is a hilarious joke. 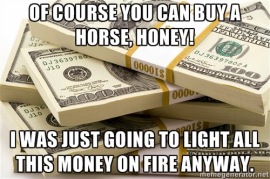 There are a million roads people can take in this sport, some of which are lined with a lot more dollar bills than others. It’s easy to look at the person on the fancy horse that they dropped a shit ton of money on and be resentful of that, but honestly… if I had that kind of $$$, I would spend it the same way. And you better believe that if somebody turned me loose in Luxe EQ with a big bucket of money, I would be the proud new owner of approximately 100 pairs of expensive new breeches in about 5 seconds flat. To try to pretend differently would be absurd.

This sport is hard enough as it is… maybe we’d all be a little better off if we accepted that just because a path isn’t ours, doesn’t mean it isn’t perfectly valid? What are your thoughts on reverse snobbery?