Yeah I know, it’s like freakin’ tack week around here. But trust me, they all weave together and come to one final conclusion, so stay with me.

Remember at the show when I forgot my saddles and had to (oh man, poor me…) ride in Trainer’s Devoucoux monoflap instead? Remember how I said that thing literally saved my ass on XC? Not just that, but really it was quite magical in general. Drops were easier, galloping was easier, staying balanced over terrain was easier. A couple bad habits that I typically struggle with on XC just went *poof* (unfortunately not the ducking to the right thing, I’m a long-time devotee to that particular maneuver) and it was really easy to stay in all the right places. It was a little eye-opening, but… maybe just a fluke, right?

Then this past Sunday I jumped Henry again, trying to emulate more of an XC school vibe with a few of the fences/terrain, and the normal struggles all came back. Cue a major uh-oh moment.

I’m really bummed about this, because I’ve loved my CWD from the moment my butt first settled into it’s delightfully french seat. It fits me great, it has fit my horses REALLY well, and it’s held up admirably to my abuse. It’s enjoyed 5 1/2 delightful years as the crowning jewel of my tack collection. If I was still doing h/j, or eventing at a lower level, I would never even dream of selling that thing. I’m fairly certain it’s like the saddle version of those weird traveling pants that they made a terrible movie about. But it’s also been made really clear to me, after a couple rides in Trainer’s saddle that was actually designed for cross country, that it’s not the best choice for what we’re doing now.

Yep, you guessed it, this is why I sold off a bunch of my extra stuff, and the CWD will have to be sold too. It’s time for a real XC saddle.

Trainer’s saddle is a fancy newer Devoucoux Chiberta with D3D panels. I know from a history of fitting dressage saddles to Henry that the D3D panels are probably the only option for him when it comes to Devoucoux. That’s what’s on my Loreak and he finds them to be delightful. Of course, they just started doing the D3D panels a few years ago so they’re kind of hard to find. Especially on a saddle that fits all of MY required specs (18-18.5 seat 2AA flap). And aren’t ridiculously painfully expensive. I also really wanted to try a CWD monoflap to compare to the Devoucoux, since I’ve had so much luck with the current CWD over the years. 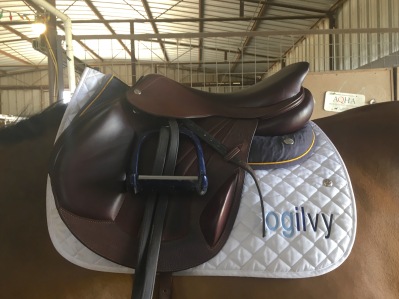 So, yesterday the lovely CWD rep came out with a saddle for me to try. It was kind of a weird panel, super built up for some reason, so at first I felt very tipped forward. When she stuck some shims under the front to level it out, it definitely felt better. Devoucoux-comparable better? Meh. I dunno.

Time to do some thinking and some perusing..

28 thoughts on “The Reluctant Upgrade”