When Henry had his January appointment, the vet wanted him to get his teeth done every 6 months instead of every 12. This is mostly because Henry has what I (lovingly) call “Janky Jaw”. It’s a little crooked, so his teeth don’t line up perfectly. If he goes a whole year between dental appointments he ends up with some pretty big hooks on the right side. He also was starting to feel kind of wonky in his left lead canter. In January we opted to just inject the right side of his SI area and see how things went, since at that point the right lead is what felt wonky. For months it was the magical cure and I had my normal horse back. Then he slowly started to feel the same way to the left that he had felt to the right before his injection. I figured that if we were going to knock him out to do his teeth, we might as well check and possibly re-do the SI. I also wanted the vet to check on his spine again and make sure he wasn’t having any pain there, since we know he has a couple of close vertebra. So… basically I wanted to just go ahead and look at/take care of everything before the fall season starts. Summer is slow for us, now is the time! 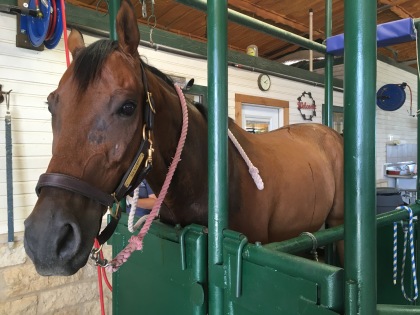 Of course, when I called the vet’s office they told me they couldn’t fit Henry in until the first week of August. Err…

After discussing what all we needed to look at and do, he was able to refer me to another vet. I’ve heard a lot of good things about that vet (and figured it never hurts to know another, right?) so I called his clinic to make an appointment. They were able to get us in the next day!

I liked this vet a lot…he listened to our history and what we’ve been doing, and briefly checked Henry out. He definitely agreed that he was sore in the left SI, and showing some sensitivity on the right as well. He thought that since we had seen success with the first SI injection, we should just go ahead and inject both sides, which is what I was thinking anyway. 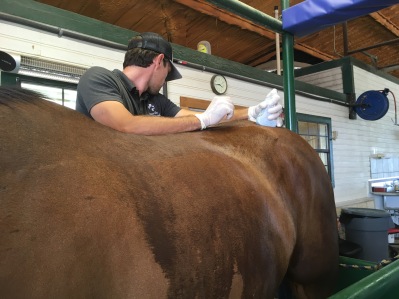 He also checked out his spine and saw no soreness and no need for any kind of maintenance there… we’ll just continue to check it once or twice a year and make sure nothing progresses. Otherwise there were no other areas of concern. 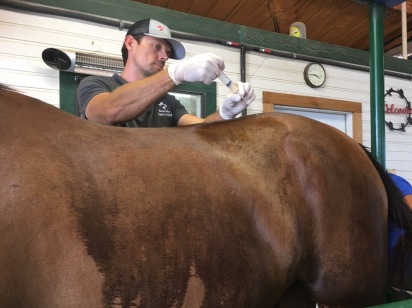 The techs got to work scrubbing the injection area while Henry got a little night-night cocktail. Even though this wasn’t the first time seeing the needles for the SI injections, they still look ridiculously giant and make me cringe. Henry stood like a rock though (he’s a cheap date), and he was done within a few minutes. 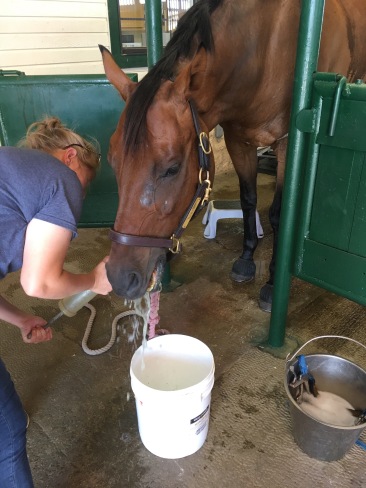 Then it was on to teeth! Again the vet didn’t see anything particularly concerning, just some moderate points on both sides. He floated everything down to be nice and even again, and declared Henry good to go.

The best part is that the bill was about half of what I was prepared to spend, and a couple hundred less than I thought it would be. In the world of horses, sometimes that feels like a win. Plus now we know a new vet!

Hopefully now Henry is feeling good and will be ready to hit all the recognized shows in the fall. He’s getting some days off and then I’ll be back aboard mid-week to see how he feels.