Well that was a heck of a proper weekend. 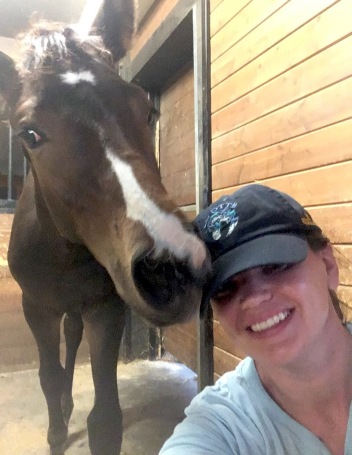 I took off work on Friday, got a rental car (because that’s 625 miles I don’t really want to put on my truck), started up my German audio lessons on Audible, and made the 5hr trip up to Willow Tree. It’s been about a month and a half since I’d seen Presto, so my first stop when I got there was at the barn to say hi to him. Naturally, he was asleep and had no interest in getting up.

So we left the boys to their napping and started planning out details for the sBs inspection that Willow Tree is hosting this fall. Mostly layout, set-up, and small details. Then we played with the barn cats (that’s a story…), Presto got some in-hand lessons (mostly learning what clucking means, and how to walk next to the human instead of lagging behind at a 2mph walk which is a huge pet peeve of mine), then we pigged out on Mexican food. That is how you Friday.

On Saturday I slept in all the way til 6:15 (late for me!) then slowly got dressed and made my way outside. Presto and Liam were much more active in the cool early morning breeze, so I just sat and watched them for a while. It really is a privilege to see that boy enjoying himself and being a normal baby. He’s even caught up height-wise… Liam sticked at 13.2 up front and 13.3 behind, and Presto is 13.1 1/2 up front and 13.2 1/2 behind. Really really close now, height-wise. Of course, Liam is literally about twice as wide, but that’s to be expected from their breeding. Liam is going to be a big, wide, powerful chunk of a horse, whereas Presto is going to be much leaner and lighter across the ground. The difference in type is pretty stark. 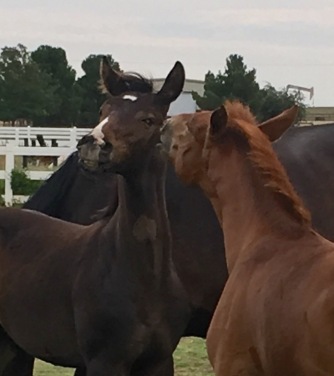 We spent the morning doing a photo shoot with one of the 3yo’s, then in the afternoon Presto got some more lessons… first with his feet (he’s had his feet handled and he’s been trimmed but he’s not very good about it) and then with tying/grooming/patience. The first Feet lesson didn’t go so well… when we got to the hinds he kicked me TWICE, earning a much longer and more intense lesson. Once he was clear on the fact that kicking is Very Bad, he was actually quite good. He’s great about tying and grooming, and even had a fair amount of patience. For a 4 month old, anyway.

He had a few more feet+ very light rasping+grooming+leading sessions over the weekend, and by the time we were done he was pretty pro at going forward from clucking. He’s really quite smart (sometimes in a too-smart way, just like his mom) and catches on fast/retains things well. You can always see his gears turning.

I bought a fly mask for him but… uh… he was pretty sure that was deadly, and I figured I’d tortured him enough for one weekend, so we’ll circle back around to that later. 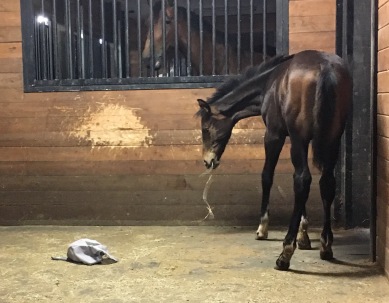 Saturday evening it started storming so they all had to stay inside for the night, which worked out great. I could go in there for really short intervals and redo all of his lessons in small doses. He got better and better about everything as the weekend went on. He’s obviously well socialized and has been handled a lot, so just adding some more intense lessons is pretty easy. He’s got a great foundation to build on.

By the time the storms were over and they got to go back out on Sunday morning, they were super full of themselves. That always makes for some good entertainment.

It was a bit of a short trip, but we got a lot done and of course it was great to see him again. He just looks better and better as more time passes, and I’m really happy to see him out there playing and acting like a normal foal. Before you know it it’ll be weaning time!