Cats are weird, y’all. And kittens? Kittens are crazy. Next level insane. At one point in my life I knew all this, but not having had a cat for a really long time, I kind of forgot. 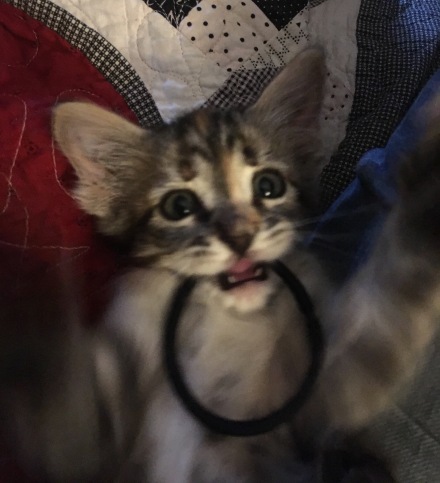 Gremy has settled in to her new life as a inside cat, and she’s starting to get a lot more comfortable in her surroundings. In the beginning she spent a lot of time clinging to us and was much more subdued. These days she most closely resembles the Tasmanian devil. What’s this bullshit I read on the internet about kittens sleeping 20 hours a day? HAHAHAHA. If that’s what’s normal, mine is broken, because she plays and plays and plays and plays for hours and then naps for like 20 minutes before she’s off and running again at full speed. Her favorite trick is to dash between your feet while you’re walking, causing you to perform acrobatics in an effort to avoid stepping on her, which tends to result in the human crashing into something. Hilaaaaarious.

She had her first vet appointment last weekend where she officially weighed in at 1.2lbs. She got a couple of her first shots, they did bloodwork, checked her for ringworm, did a fecal, etc. She was PISSED. I had to sacrifice another hair tie to keep her distracted (I’ve somehow lost approximately 557 hairties in the past two weeks).

She also got her tag, so she’s officially official now. My name and number are on the back and everything.

And the SO got her a harness and leash because he’s deadset on having a cat he can walk. Of course she’s so tiny right now that even the tiniest one they had is too big, so he’ll have to revisit that endeavor once she gets a bit bigger.

The dogs are still terrified of her, which has emboldened her a bit. She is not at all shy about coming at them with a needle-filled claw if they get too close, and she quite enjoys playing with Delia’s tail. They still have a little more settling in to do before everything is seamless, but so far everyone has at least escaped unscathed and for the most part they seem satisfied to leave each other alone.

So far so good! She’s definitely in that lunatic kitten stage, but she seems to have transitioned to her new life happily enough. 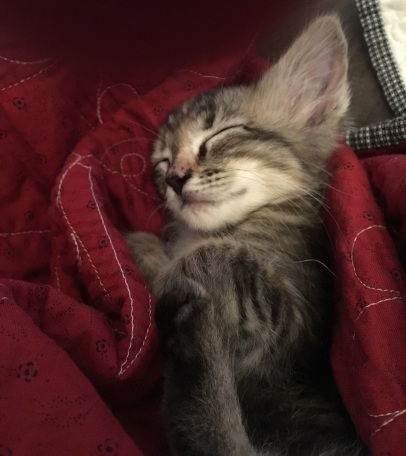 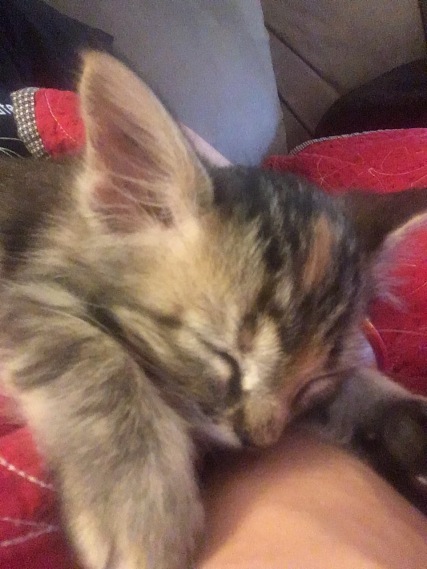 And she’s still really damn cute when she sleeps, even though those moments are getting more and more brief…