Woooo Sunday, the final day of Bucha, and the day where the champions would finally be crowned! We did some last minute shopping in the trade fair in the morning, then watched the jumpers for a little bit before heading over to the XC field. When we were looking at the course the first thing I said was “Americans would probably shit themselves over jumping this stuff on 5yos”. What say you, Americans, arst thou shitting?

A couple of horses had some issues, and there were some green moments, but otherwise the majority skipped through it like it was a walk (gallop?) in the park.

Once again I was looking forward to seeing how my 3 favorites went on XC. Seeing them in stadium gave us a good idea of their basic talent, but we all know that XC is a whole different ballgame. We sat/stood on a bank complex off toward one side of the grounds, which gave us a pretty decent view of most of the fences. The first one to go out of my 3 favorites was the Diarado mare, Deike 22. She was such a nice eventer type, with a great effortless gallop and plenty of jump. Really, really lovely horse that certainly looked like an upper level eventer. 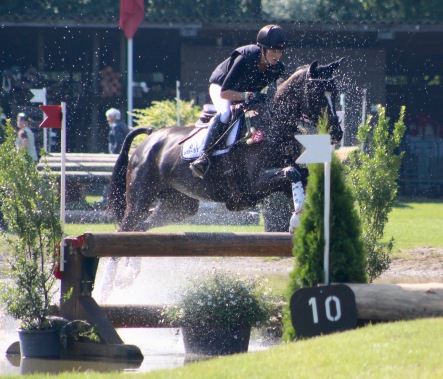 A little while later, it was the Mighty Magic’s turn. He zipped right around like it ain’t no thang, easily handling all the harder questions. Never waivered from his line, never sucked back, never missed a beat. He was clever, he was brave, he was athletic, and he was forward thinking. Loved him even more on XC. Which is a good thing I guess… would have been a bummer to hate the horse by the same sire as Presto. Luckily the MM genetics held true. After they announced his XC score (8.7) his rider cheered and hugged him and looked like she was about to burst into tears. She very clearly adored him. 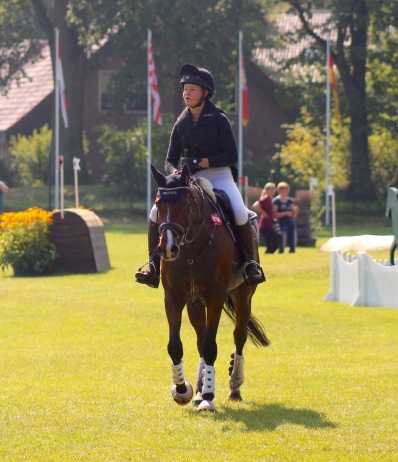 Finally Gentleman, the Grey Top stallion, was towards the end of the order. Clearly the spectators had already heard the buzz, because by the time he started there were people stacked up everywhere to watch him go. The crowds here are clearly very educated. 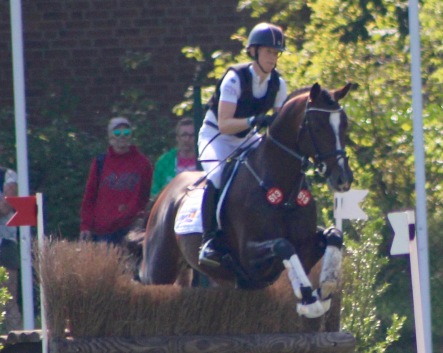 His round was pretty great (I mean… I would expect that from a horse who has been piloted by Olympian Sandra Auffarth for his entire career) and his score of 9.5 secured his overall win.

We hung out to watch the awards presentation and victory gallop, which was all very amusing in itself. The Diarado (who ended up 3rd) stood there grazing throughout the whole awards ceremony, while the Mighty Magic (who ended up 4th) just looked bored AF. Meanwhile the one with the TB sire was spinning like a top (clearly pumped to have ended up 2nd).

After the 5yo eventers were done, we headed back up to the showjumping ring to watch the end of the 5yo jumpers and then the 6yo 2* class. The winner of the 5yo’s was Diaron 2, another one sired by Diarado, out of a Come On mare. Super super nice horse.

By this point of the weekend we were pretty much professional bleacher sitters, and we manged to snag ourselves a spot on the shorter bleachers, on the top row. That way we had the back railing to lean on, which was pretty damn amazing after hours and hours of regular bleachers. It’s the little things, ya know?

After the first round we finally threw in the towel, took one last slow stroll through the vendors, and made the long walk back to the car. Our 2017 Bundeschampionate was over.

But we weren’t quite done with Germany yet, and still had some pretty freaking awesome plans for the next day. First though, one last stop at our favorite restaurant Dreibruckenhof for an epic Spezial Balkan Platte. 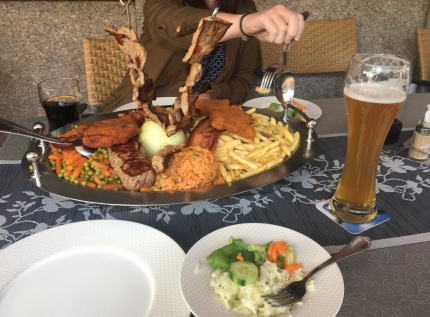 This thing said it was for two people. Michelle and I did a pretty impressive amount of damage, but there is no way two normal people could eat all of that. Steaks, sausage, schnitzel, fries, vegetables, rice… all so good. Way too much damn food, but it was really fun trying to eat it all. Love you forever, Germany. ❤

6 thoughts on “Epic European Adventure Part 6: And the winners are…”