Ask and ye shall receive! A full review on these will have to wait a little while, but since several of you wanted to know, here are my first impressions. 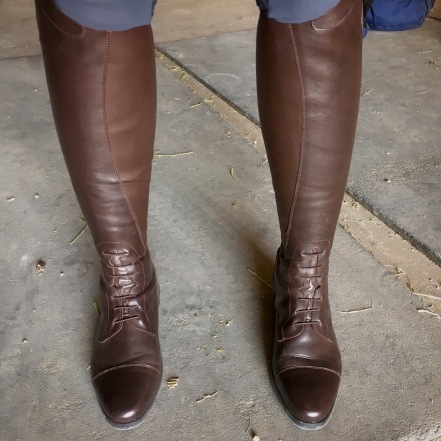 I specifically wanted new brown boots for schooling, and wanted to stay under $400. Since Karen’s Ariat’s fell apart in a year, and the Mountain Horse don’t come tall enough unless you also have a slim calf, that nixed both of those. I liked my Mondoni’s a lot, but wanted something a little bit higher quality and darker brown this time around. When I saw that Ego 7 was coming out with chocolate brown, they immediately shot to the front of the line. I first saw Ego 7 a few years ago at AETA and quite liked them. Makes sense, since they’re designed by Franco Tucci, and I love my Tucci’s.

The first obvious difference between these and the Tucci’s is of course the price. The Tucci’s are closer to the 1k mark, whereas the Ego 7’s run more like $500 USD. Which, yes, if I had bought them in the US that would have put them out of my budget. But in Europe they run about 299 Euro, which is around $350 USD. Thus why one of my biggest missions for Europe was finding these boots. Granted, you don’t have to actually fly all the way to Europe just to buy them from Europe… there are plenty of online shops that will ship here and you’ll still come out ahead. 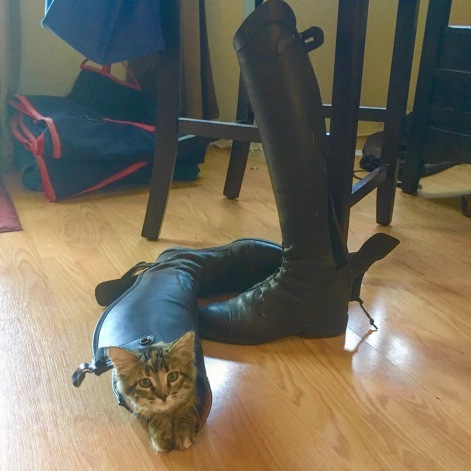 For the price I paid, I’m satisfied with the quality. Not blown away, but satisfied. They are not the fine Italian leather of the Tucci’s, but at the price that should be obvious. They still seem well made and I like the materials and design a lot. They have all the design features of the higher end boots: nice tall spanish top, close fit through the ankle, snaps at the top and at the bottom, a padded “tongue” inside the back of the ankle, and little tab at the top snap to thread the zipper pull through so that it doesn’t fall down. It’s not as innovative and awesome as the snap system on the Tucci’s, but it works. I also like the E-Tex material on the calf. It’s pretty grippy, and blends in perfectly to the pretty chocolate brown color of the leather. We’ll see how it wears over time. I do think that a more squared toe would really take them up a few notches in the style and class department.

I like the little spur rest design that these have, with 3 different “levels”. When I first saw that feature I was worried that it might end up kind of acting like a spur, but I think unless you really ride with a seriously clamped heel then that’s not going to happen. The little nubs are pretty small. I do ride with spurs most of the time, so this particular spur rest design definitely helps keep them in place with no sliding around.

Fit wise, I’m glad I was able to try them on first. The foot seems to run a bit big, IMO, and the calf runs SMALL. Like go up a size from whatever the size chart says you would be. Really I could have ended up in a bigger calf size than I did, but I was limited to what the store had with them, so I’ve made this work. It did require some stretching, and they’re still not quite there yet, but we’ve made a lot of progress. If anything, these first couple weeks has definitely been a testament to the hardiness of their zipper. 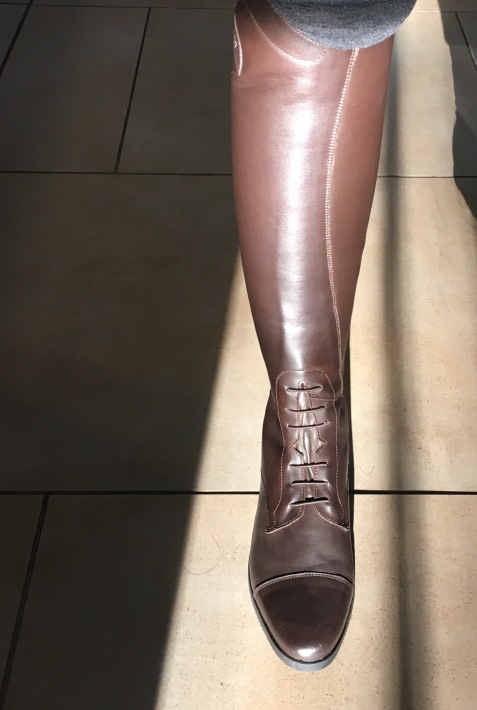 To me the instep seems to run a smidge high, I have some extra room there. The ankle is very well tapered though, which gives these a nice slimming look. I also was able to get the regular height, and they’ve dropped to be pretty perfect.

Overall I’m happy with them so far. For a schooling boot, or even a low budget show boot, I think they’re a good choice. I definitely like them more at the $350 I paid than the $500+ that I would have paid in the US.