I love it when one whole day of a show is devoted only to everyone’s XC… it’s like the atmosphere changes and all the sudden everybody is PUMPED AF. It’s the main reason why we do all that other crap, after all. If you’ve never stood near the finish line of XC at an event, I highly recommend it.

My ride time wasn’t until noon, so I didn’t even have to set an alarm. I slept in ’til a glorious 6:30, got up and fed Henry, took him for a walk, cleaned his stall, and basically just sat around and watched other divisions all morning. I was wondering if he’d be feeling a little bit tired from the day before, but the answer was a resounding no. As soon as we picked up the canter in warmup he gave me a very sassy little headtoss. He knew exactly what phase was coming, and he was ready. He’d been ready since before dressage, let’s be honest.

We’ve been to MeadowCreek a bunch before, but for the entire last few years that we’ve been coming, the course hasn’t changed much. For this show they flipped it around completely – not only running the track backwards, but also moving pretty much every single fence. Almost nothing was the same from when we were here in June. I was mostly glad about that, because it would give us some new challenges, but also a little nervous wondering if it would throw Henry for a bit of a loop. Nothing looked particularly big or difficult to me except maybe the new Weldon’s Wall (where the old half coffin used to be). That’s mostly just because I hate Weldon’s Walls and think all of them should die in a big fire. Otherwise though, I thought it’d be good.

Fence 1 was just a little rolltop 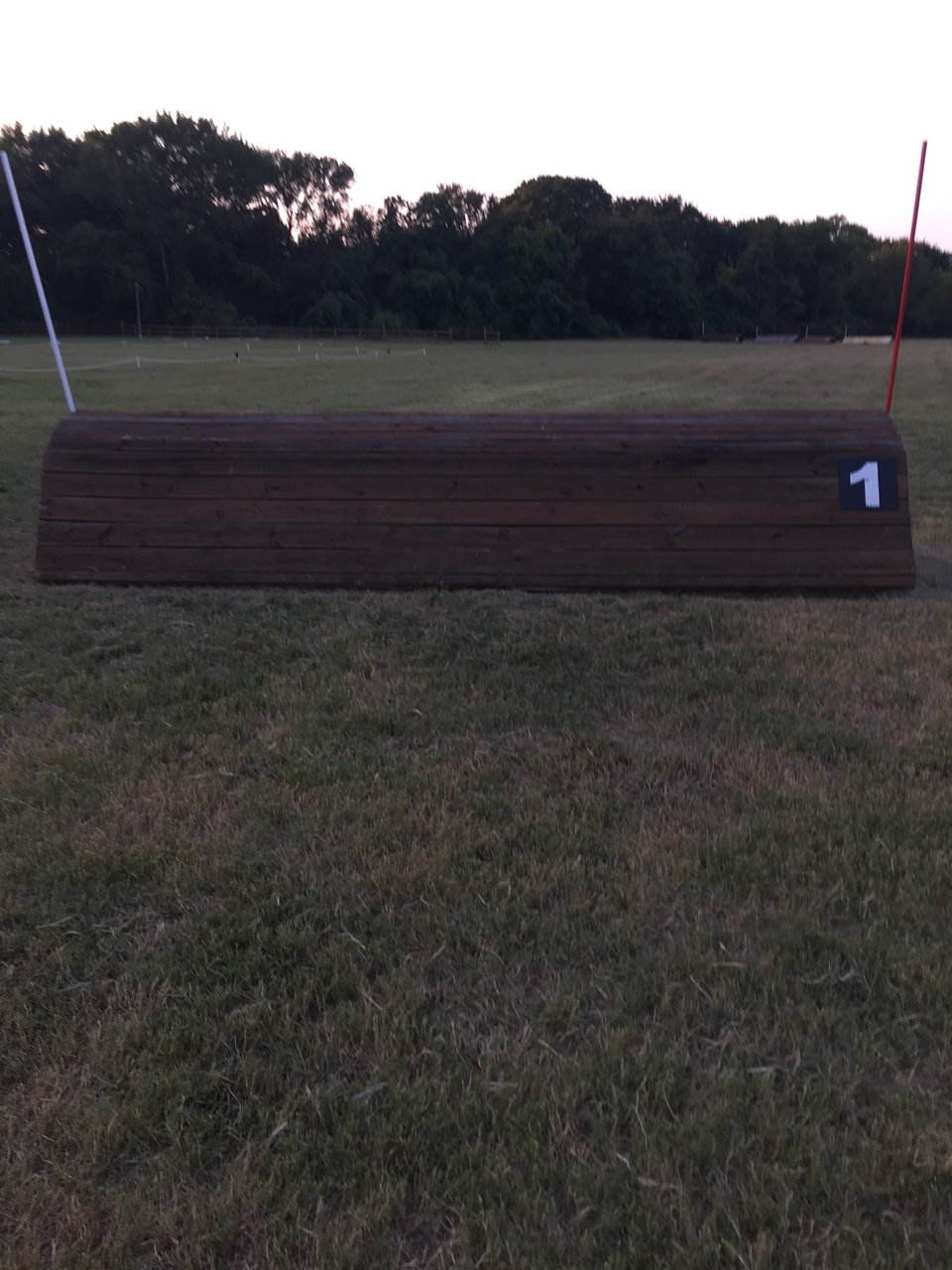 down to 2, a wide ramp. I wanted to get a little bit ahead of my time in the beginning and establish a good rhythm, so I let him open up a bit for the first few fences. The speed was 470mpm, pretty fast, and the second half of the course was a lot more twisty and technical. I wanted to have some time in hand before we got there, therefore more gallop at the beginning. You don’t have to tell Henry twice. 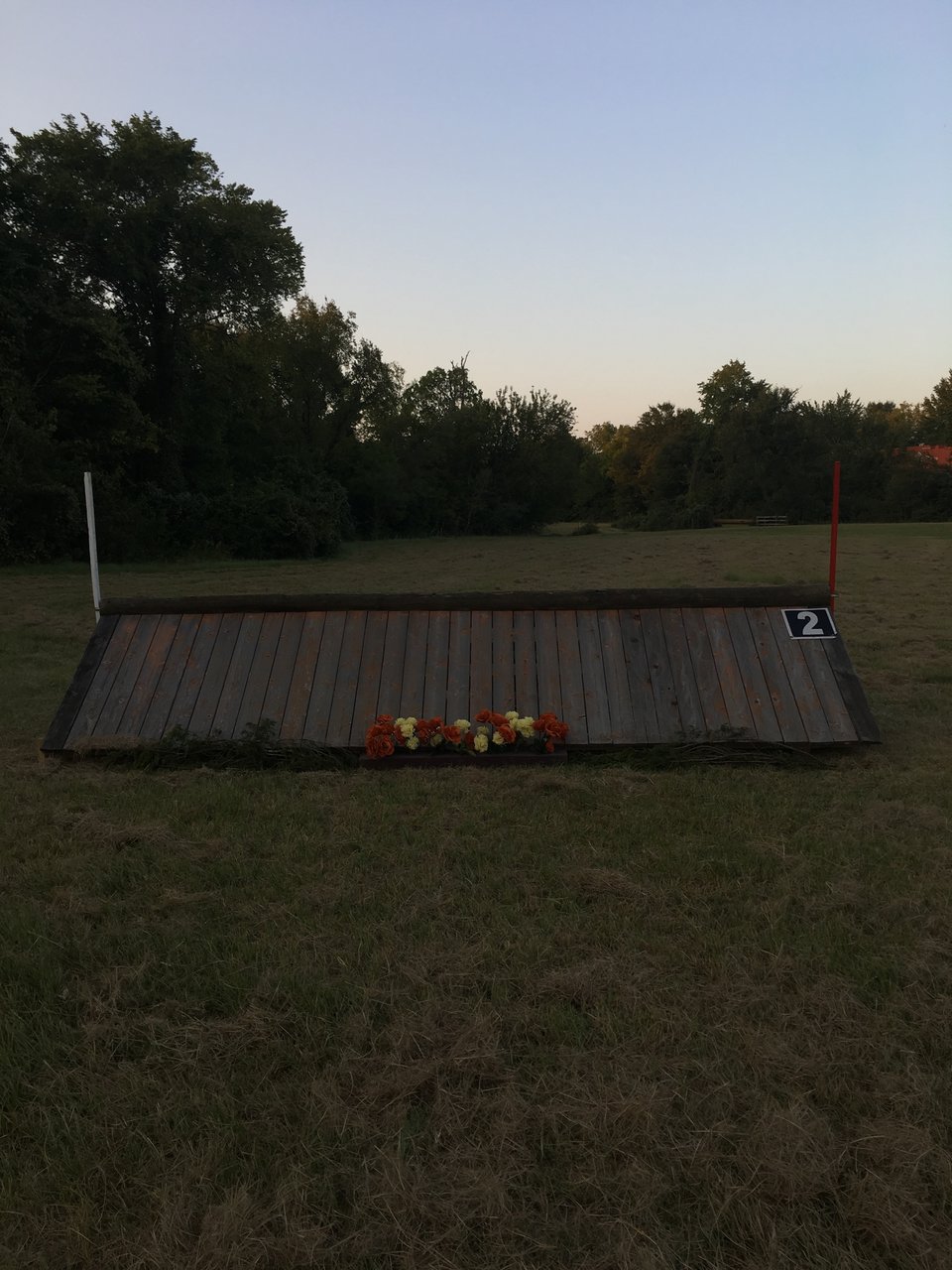 3 was just a little brush table 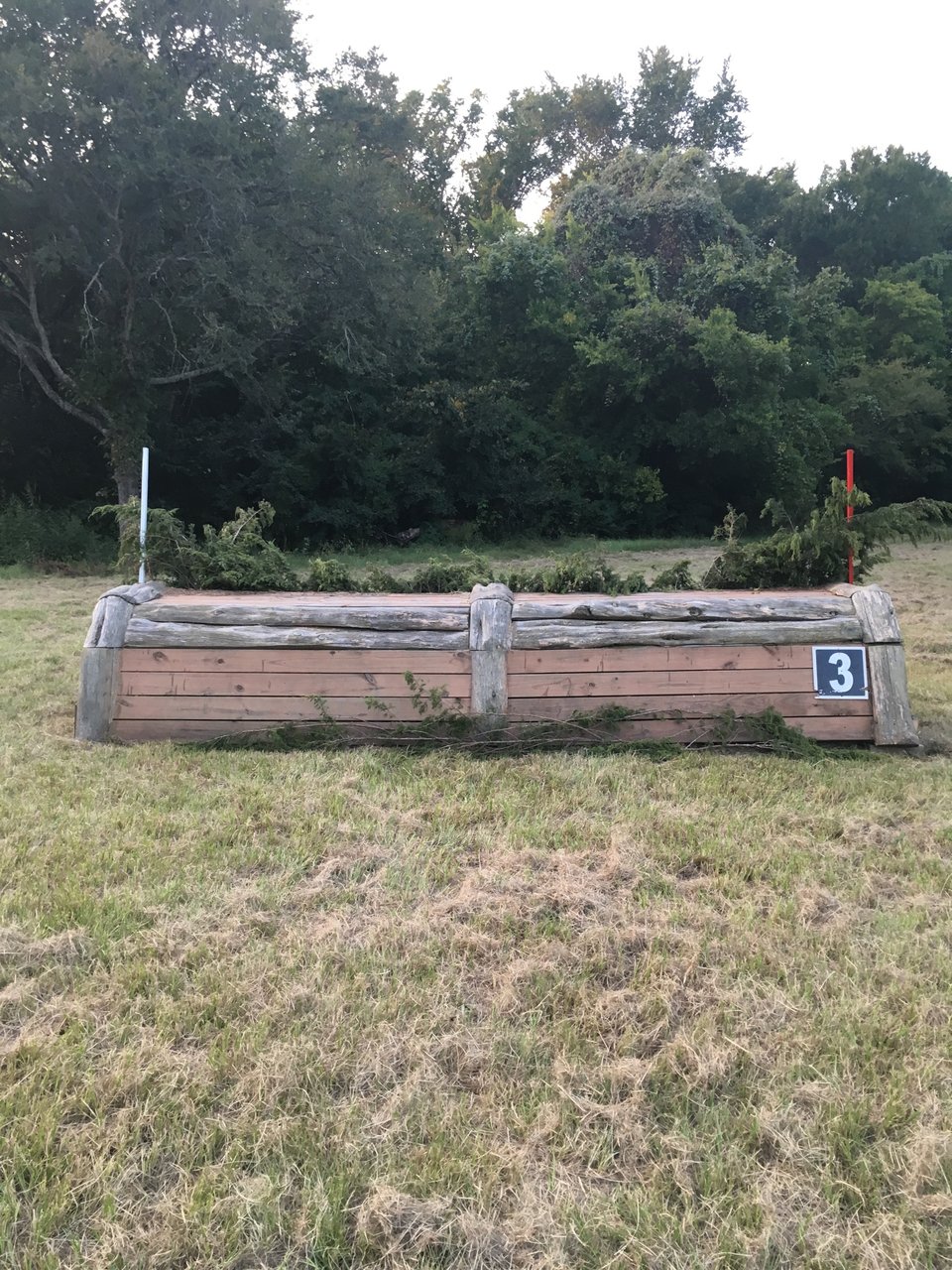 then around to 4, the chevrons. 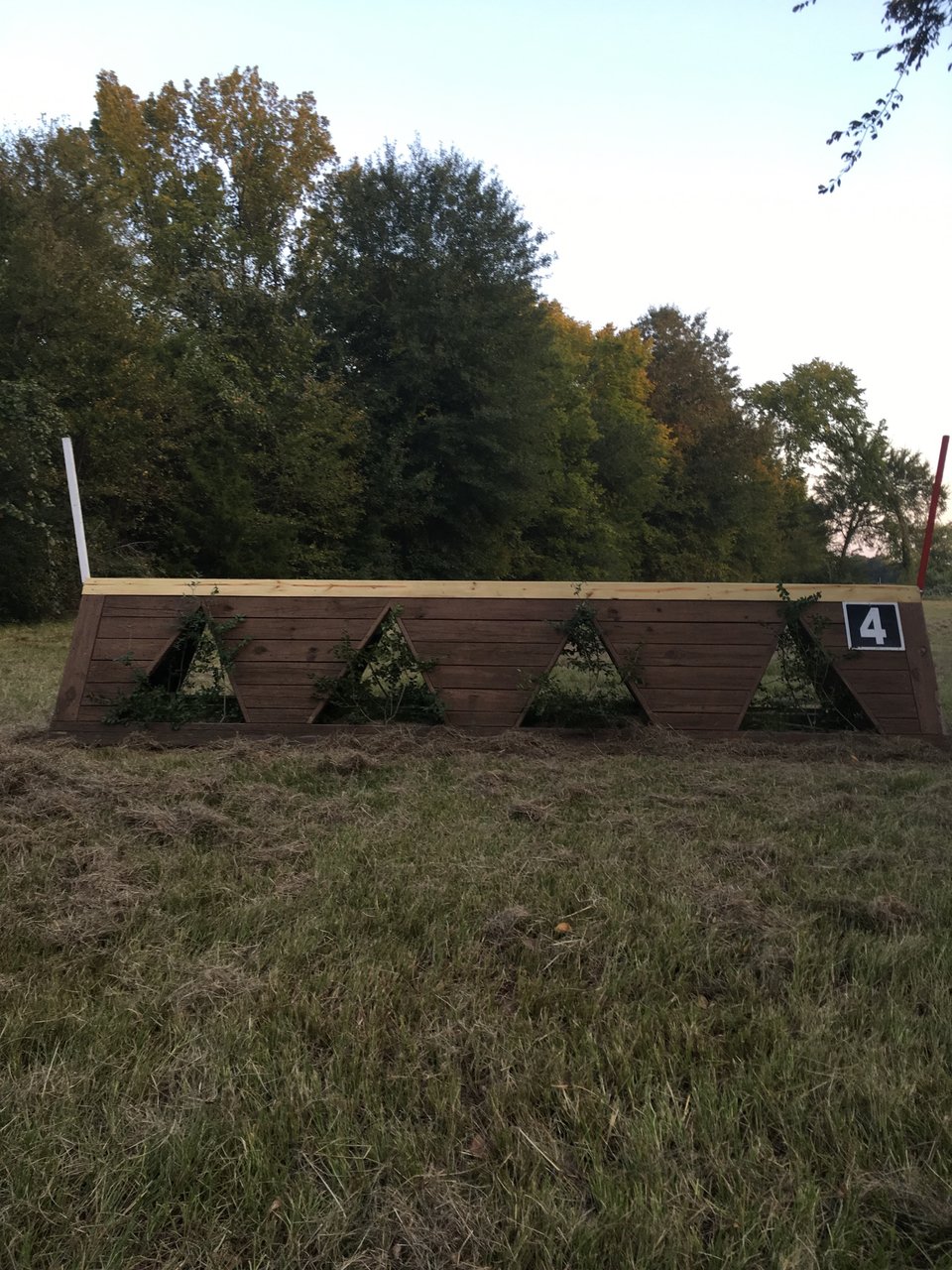 He was already on fire at this point, SO HAPPY to be out. We had a little bit of a gallop stretch to 5, a table 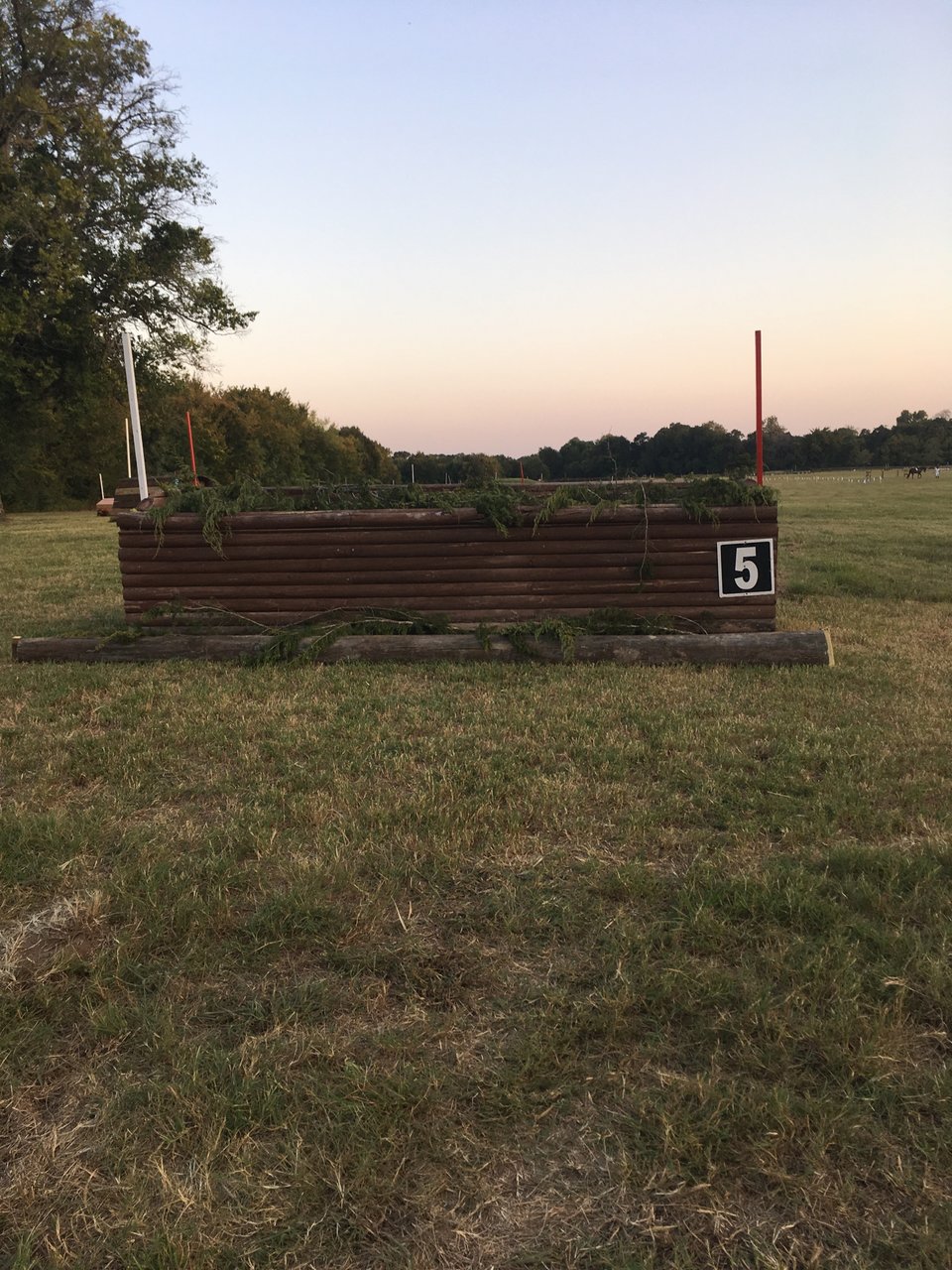 Then I started putting him back together for the first real question – the combo at the mound. It was a rolltop, up and over the mound, with a skinny rolltop off to the left at the bottom. I thought this rode really well, and he locked right on to the skinny rolltop with no problem. 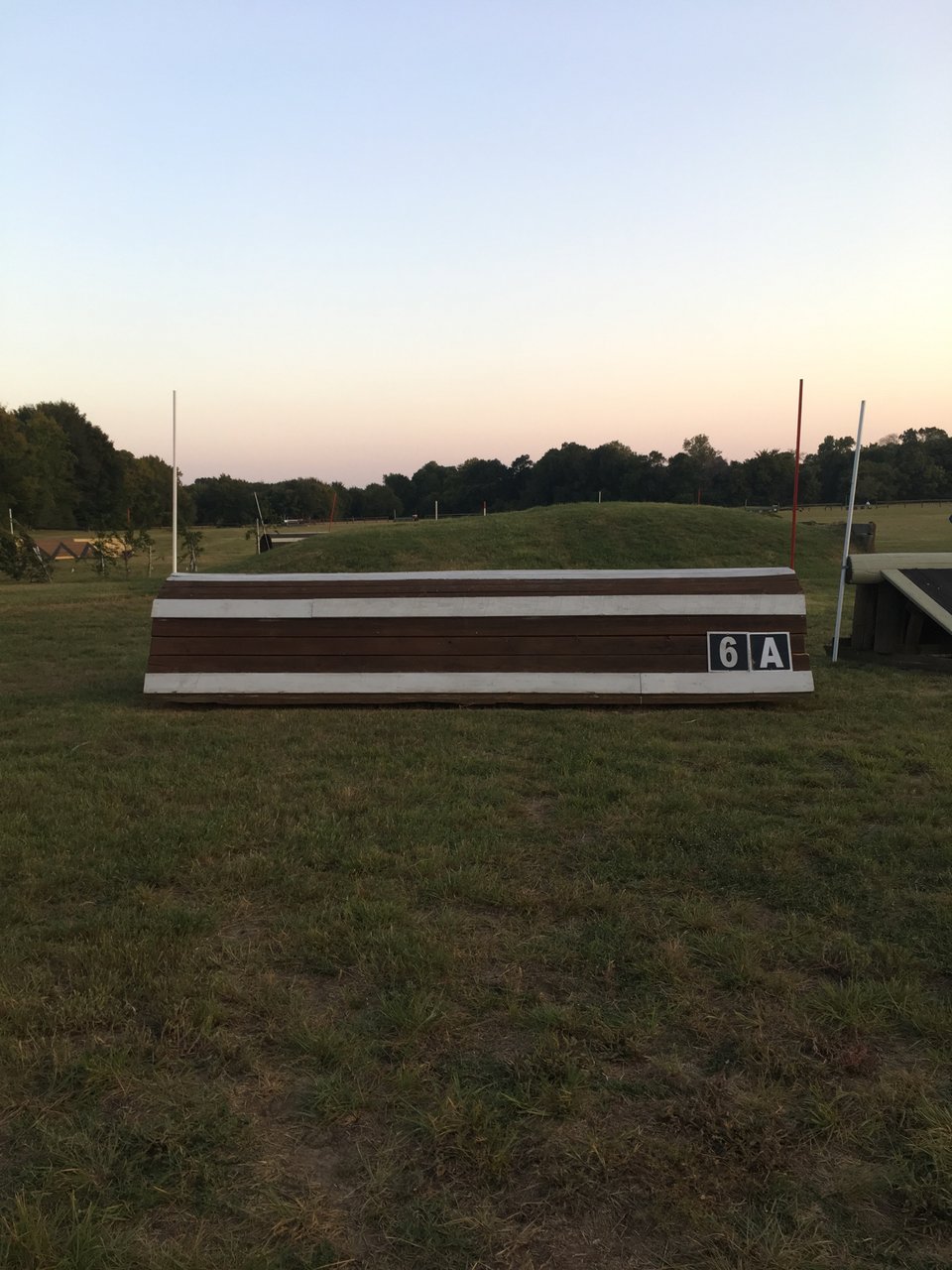 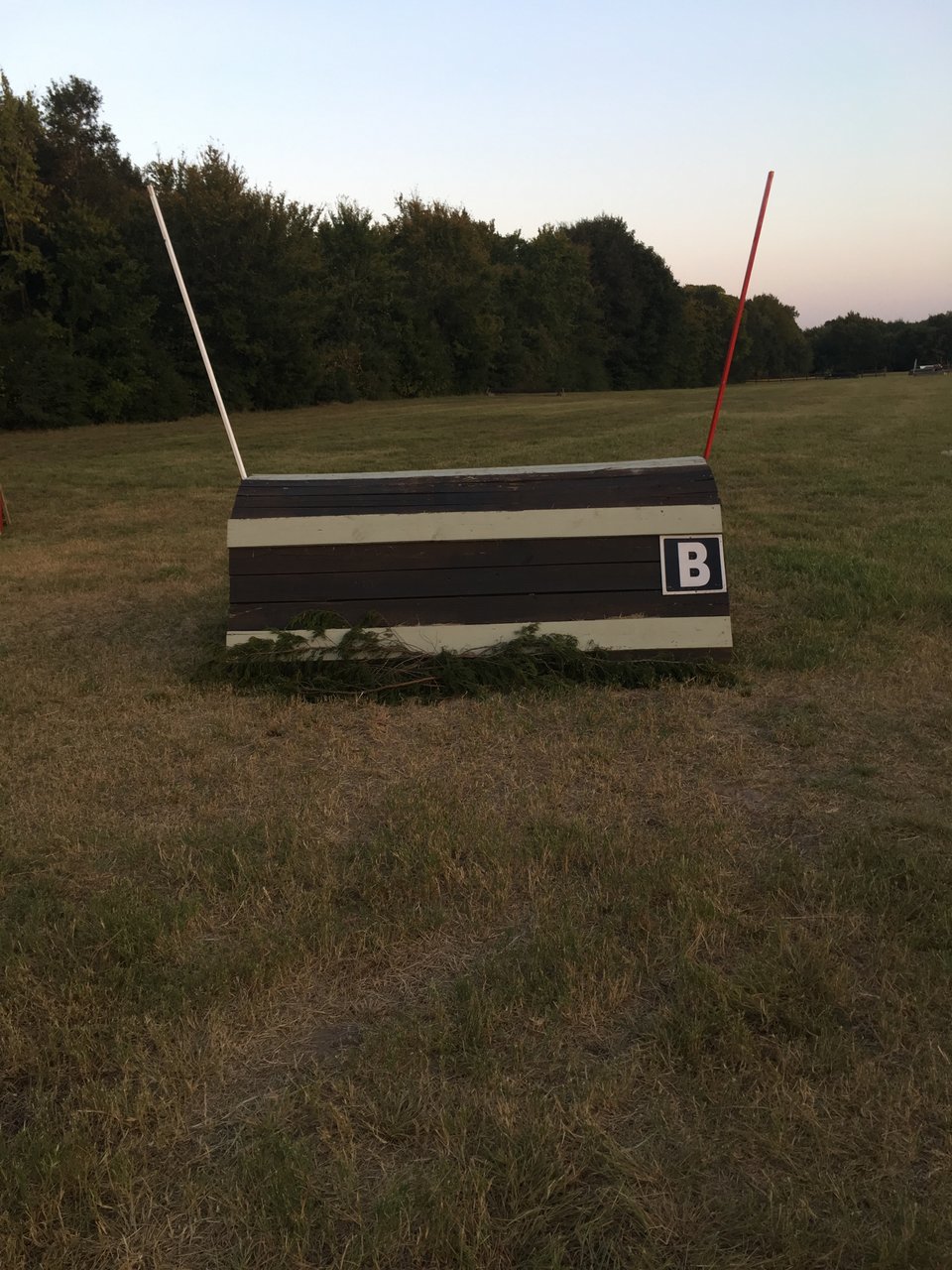 Yeehaw, y’all. Game on. I think this is the point where I started smiling.

I let him keep rolling a bit to 7, the cabin in the fenceline 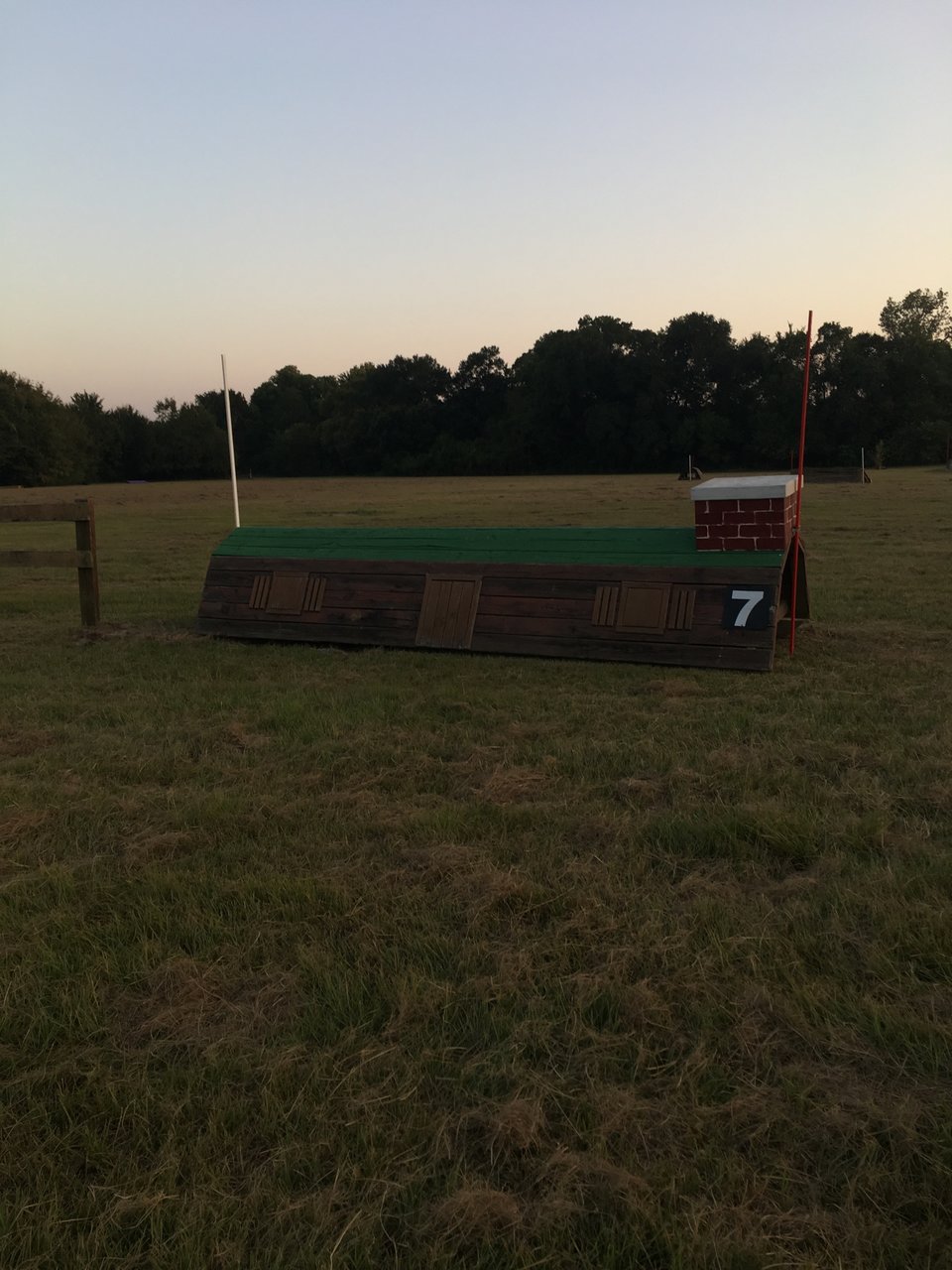 because after that is where I had to start putting him back together. After 7 we hung a sharp right and there was a random tiny little skinny log in the middle of the field at 8 (which I’m pretty sure he thought wasn’t on our course, I felt him going “are you sure that’s the right one? It’s so tiny!” right up until a few strides out) 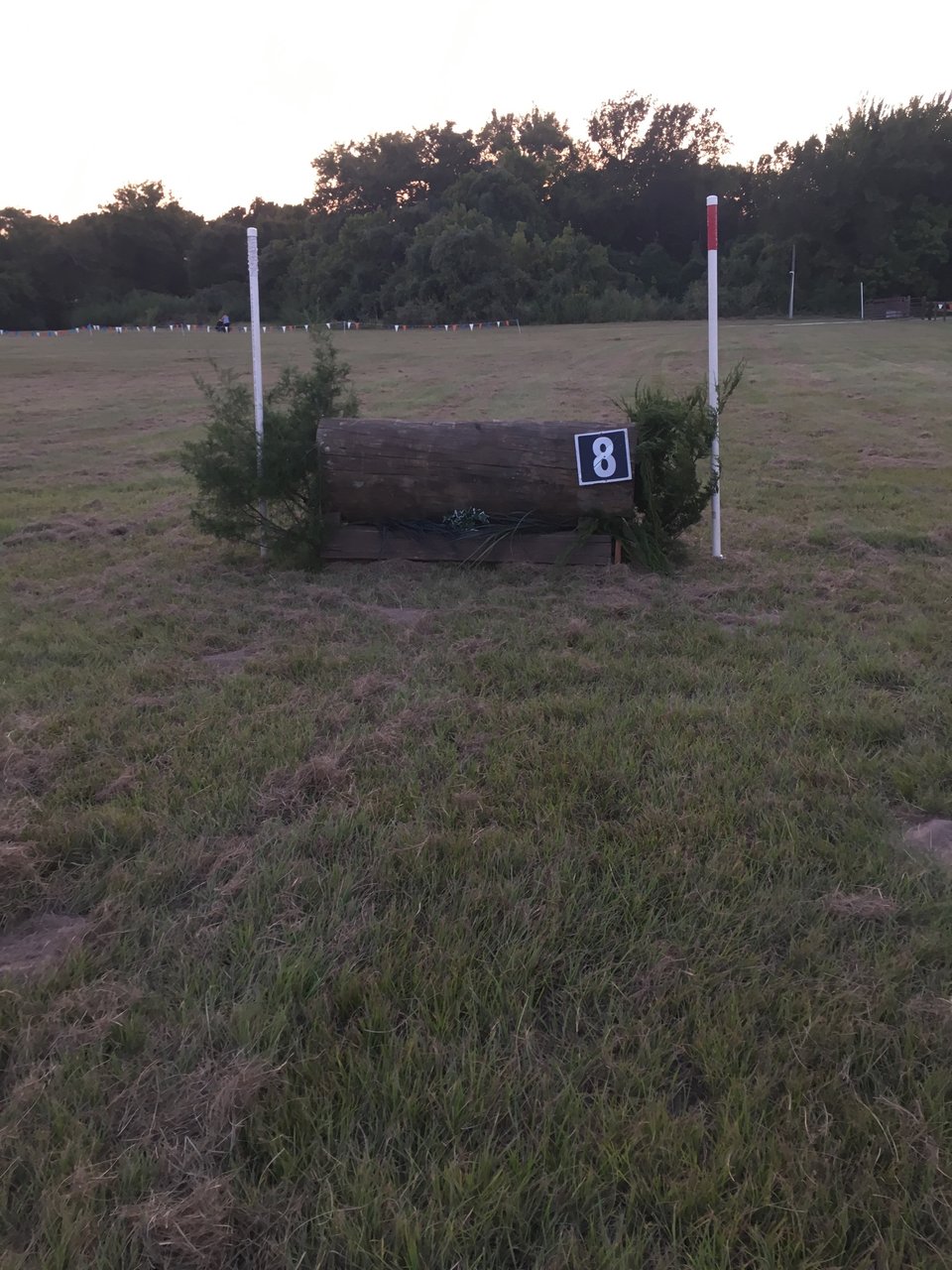 before a big rebalance and sharp left to the water. He loves water. I love water. We’re on the same page. The log into the water has a bigger drop on the landing side than you realize, but that just makes it more fun AMIRIGHT??? He jumped in a little more bold than I was expecting, so the 5 strides rode a bit tight, but no problem. 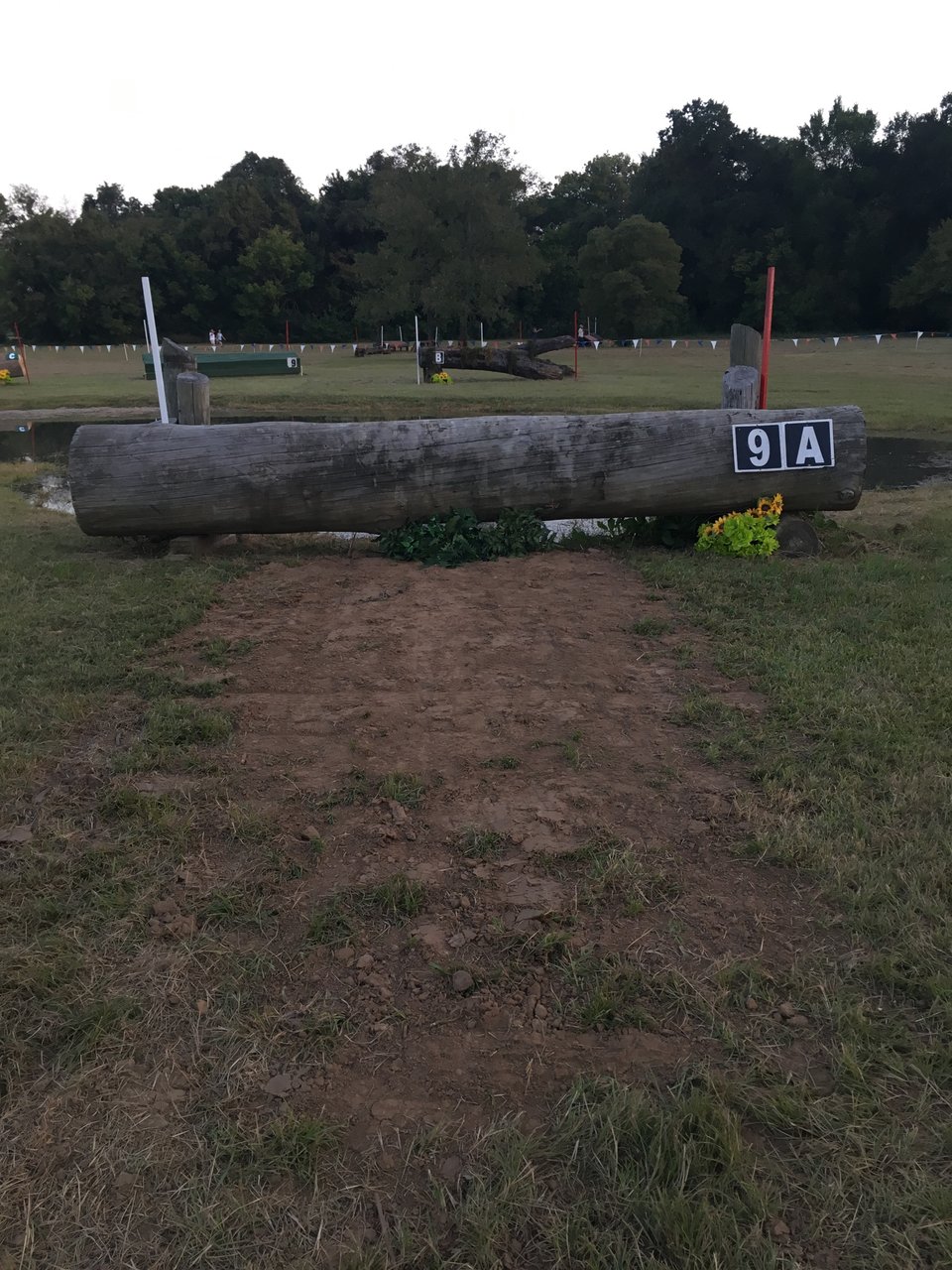 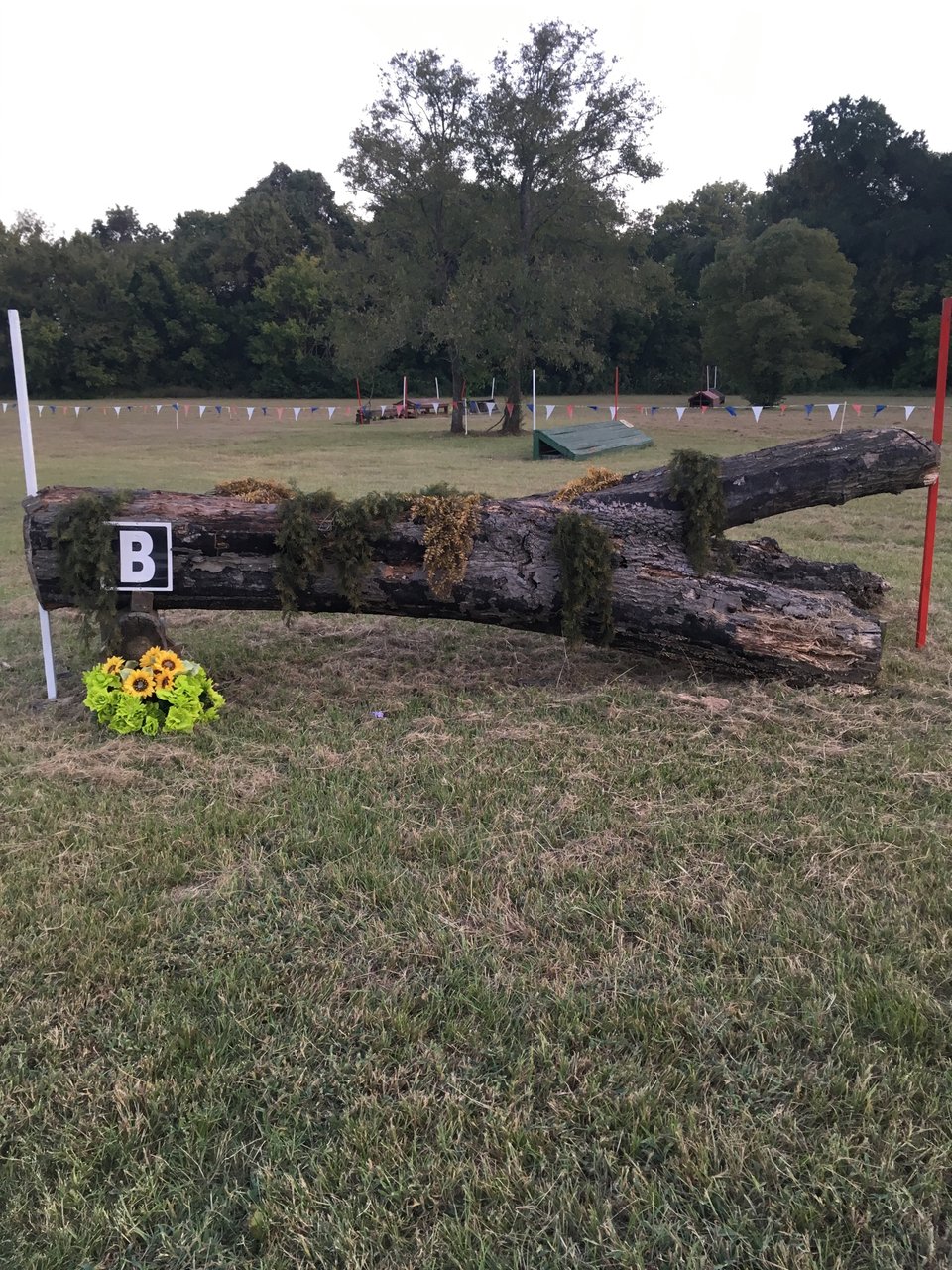 Out of the water there was another sharp left down to the next question on course – a drop bank to a rolltop. I didn’t anticipate any issue here, but obviously wanted to try to jump down the bank as calmly as possible so it didn’t ruin our distance to the rolltop. He obliged and it rode perfectly. Smile is even bigger by this point (in between the wheezing. God it was hot zipped up inside all my gear.). 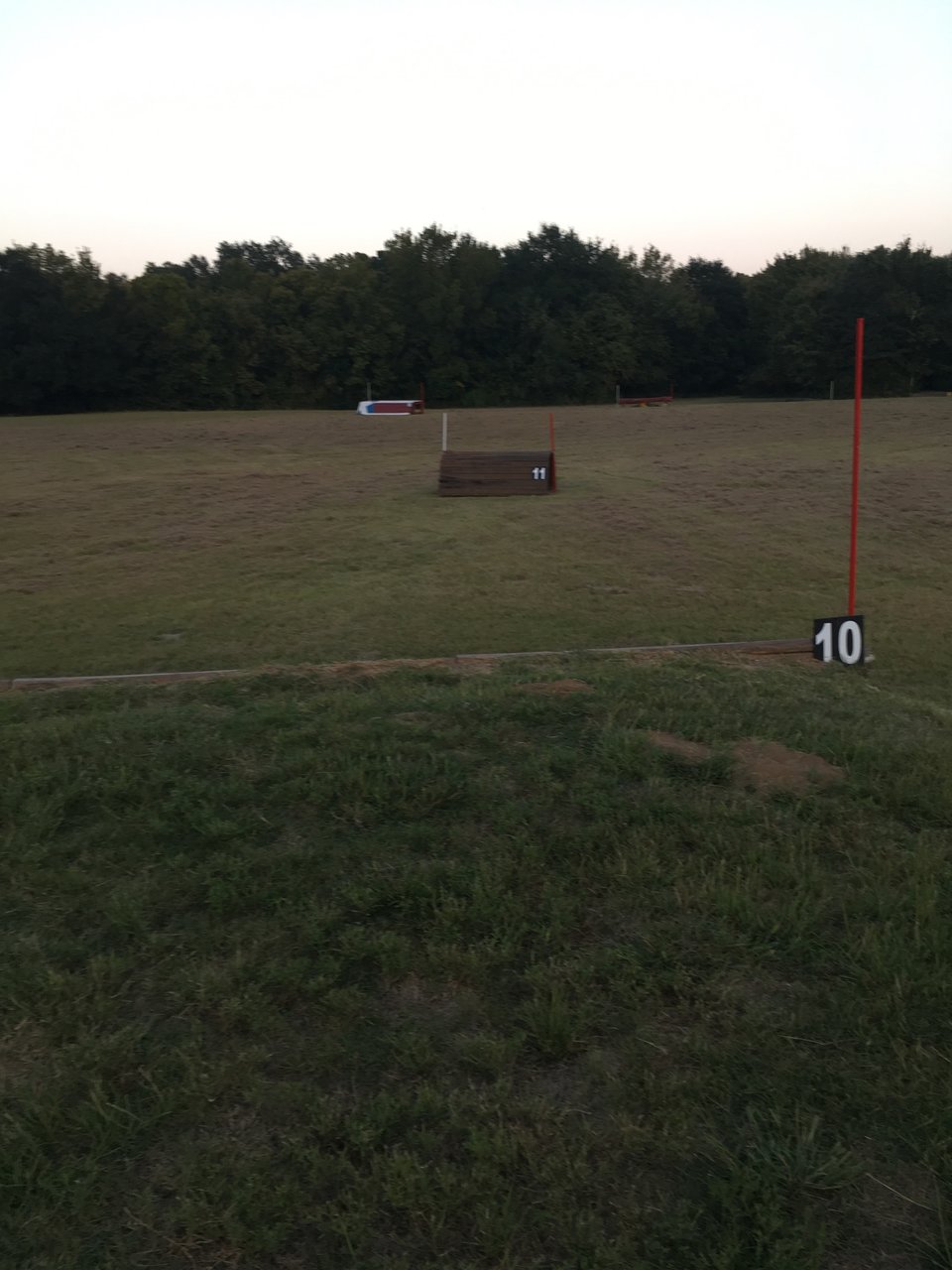 Then we wove around some trees to a little table set back in the shadows. I don’t like this thing in theory because it’s so dark but it always seems to ride fine. This time was no exception. 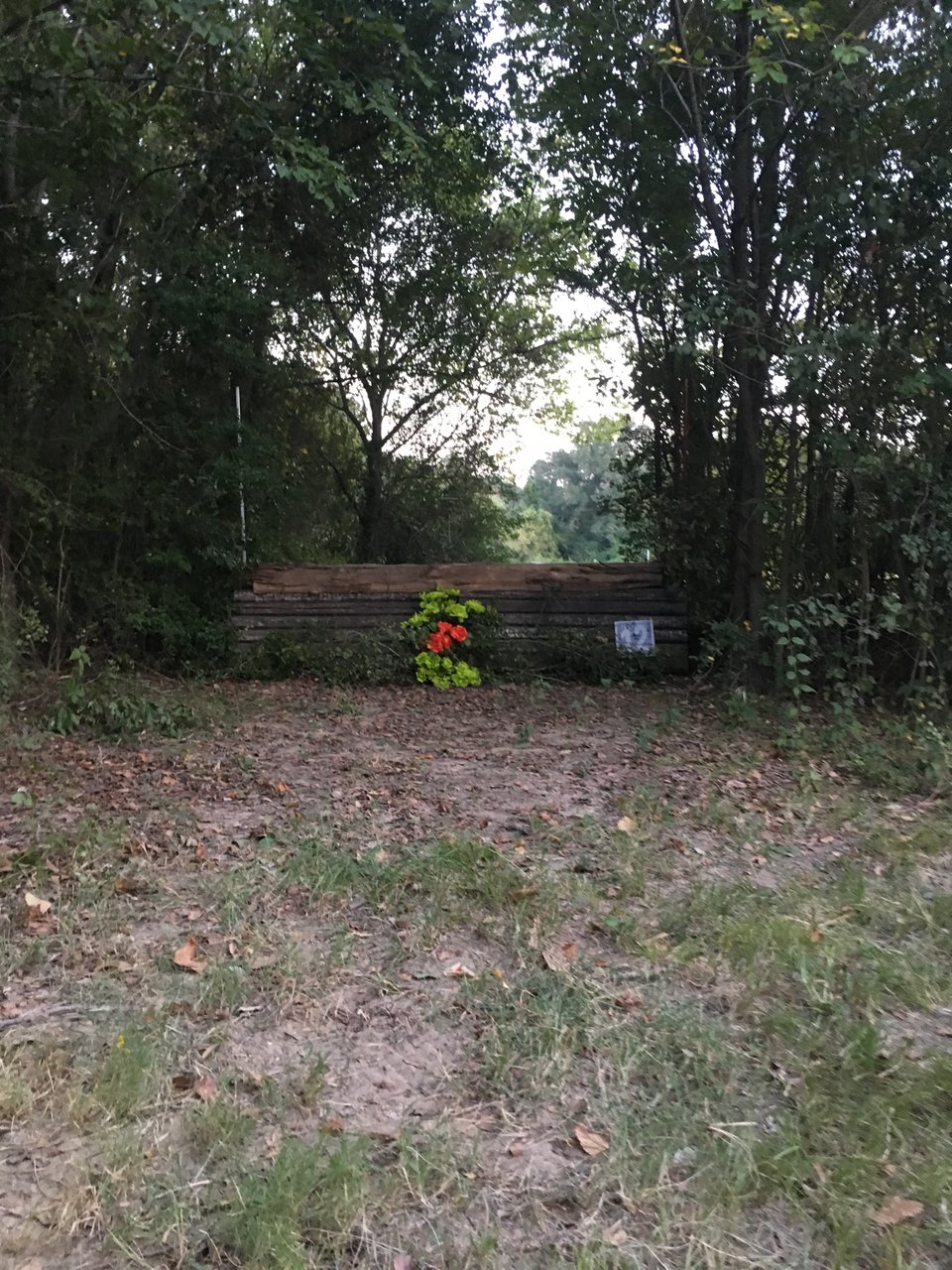 After that was the brand spankin’ new Trakehner. The ditch was big. At least I think it was big, I wouldn’t know for sure because I didn’t walk within 20′ of this thing on the course walk. It looked big from that far away so there was no need to get any closer. There are some things I just don’t need to know, ok? I gave him a little tap with the whip at the base, more for my benefit than his, but he just sailed right over. I think Henry was so high on cross country by this point that there could have been a family of grizzly bears in that ditch and he wouldn’t have noticed. 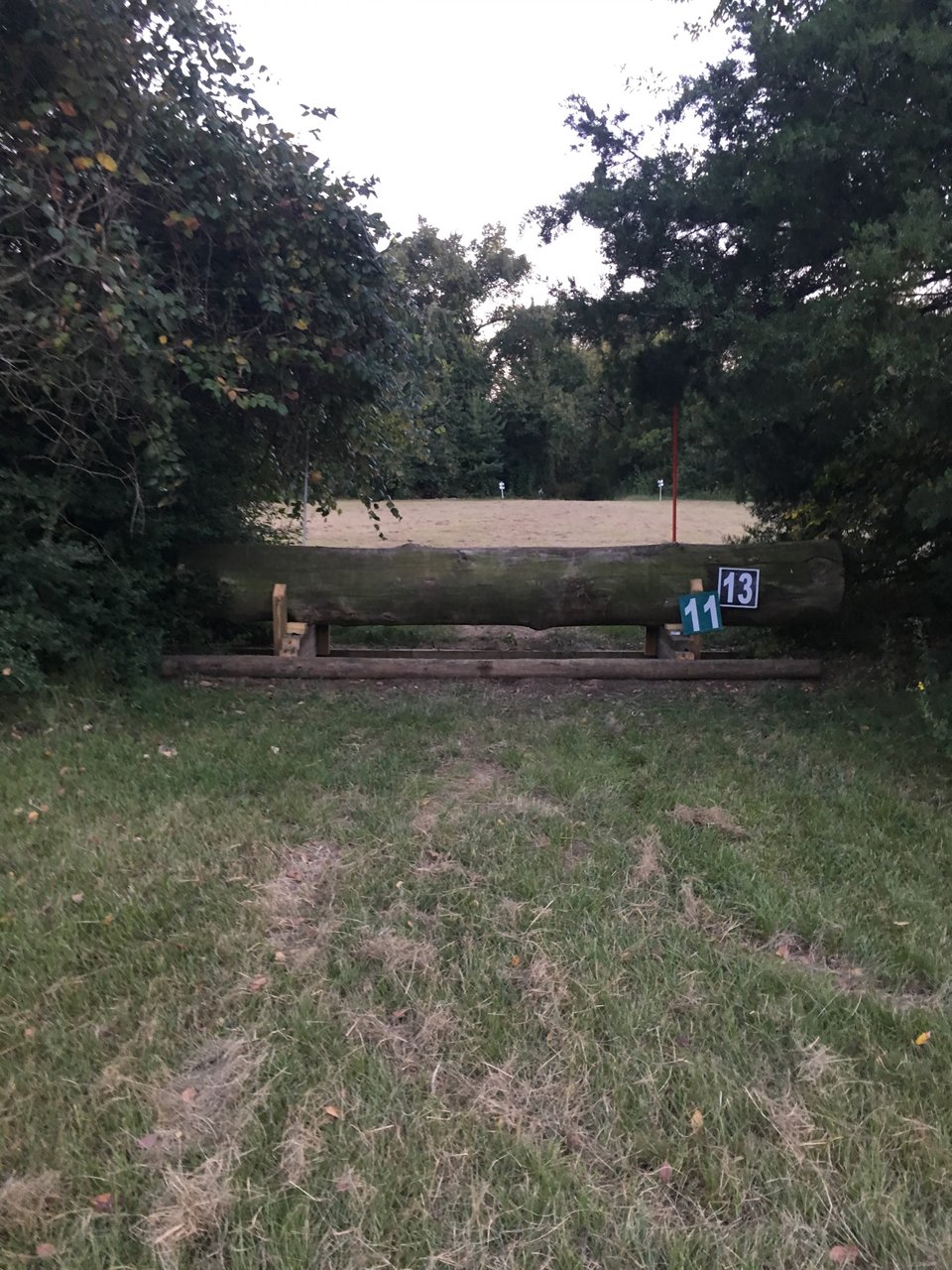 After that we crossed the bridge to the other field and had a bending line combo of brush fences. It took a couple whoas to convince him to come back for this, but it rode fantastic. No problem. 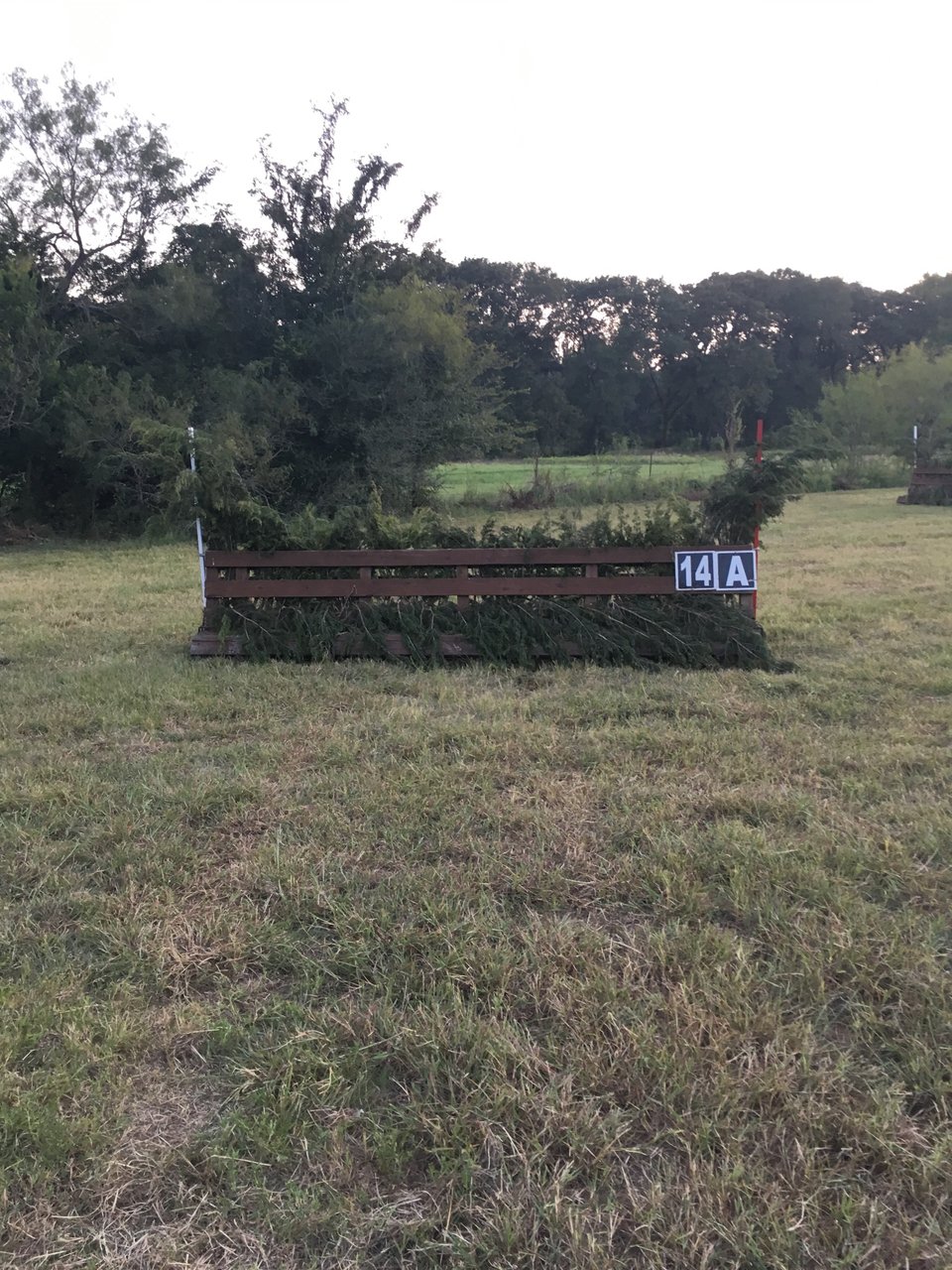 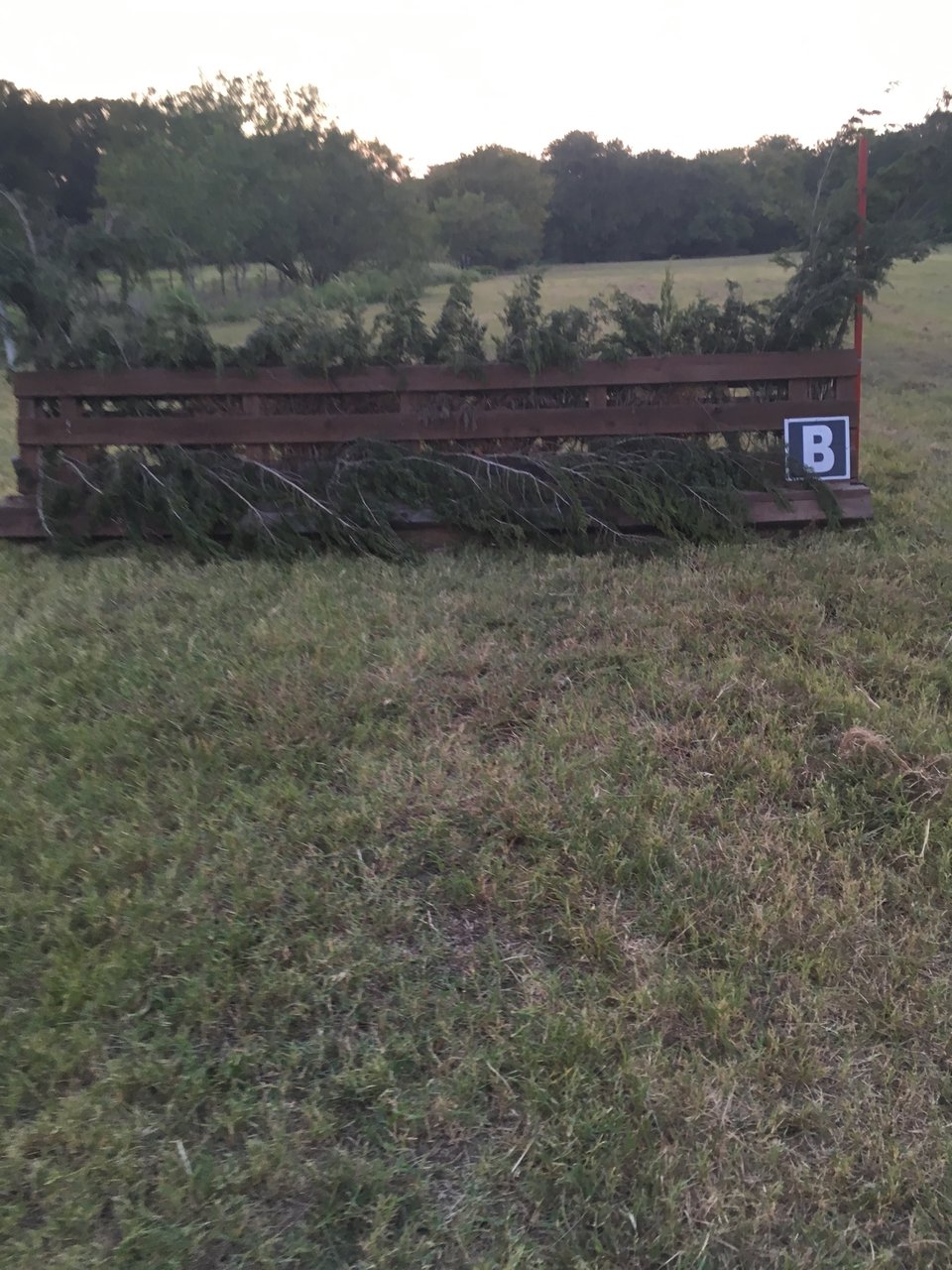 Thanks for the video Kate!

After that was the dreaded Weldon’s Wall, the only fence on course that had really caused me any concern. The ditch in front wasn’t wide, but I still hated it. I stuck my feet a little further in the stirrups, sat up, velcroed myself to the saddle, and looked up where Trainer told me to (for once in my effing life)… just in case he took a peek! But honestly, I don’t think Henry even noticed there was a ditch. He got right up to the base and we landed galloping away. Gold star for the pony. 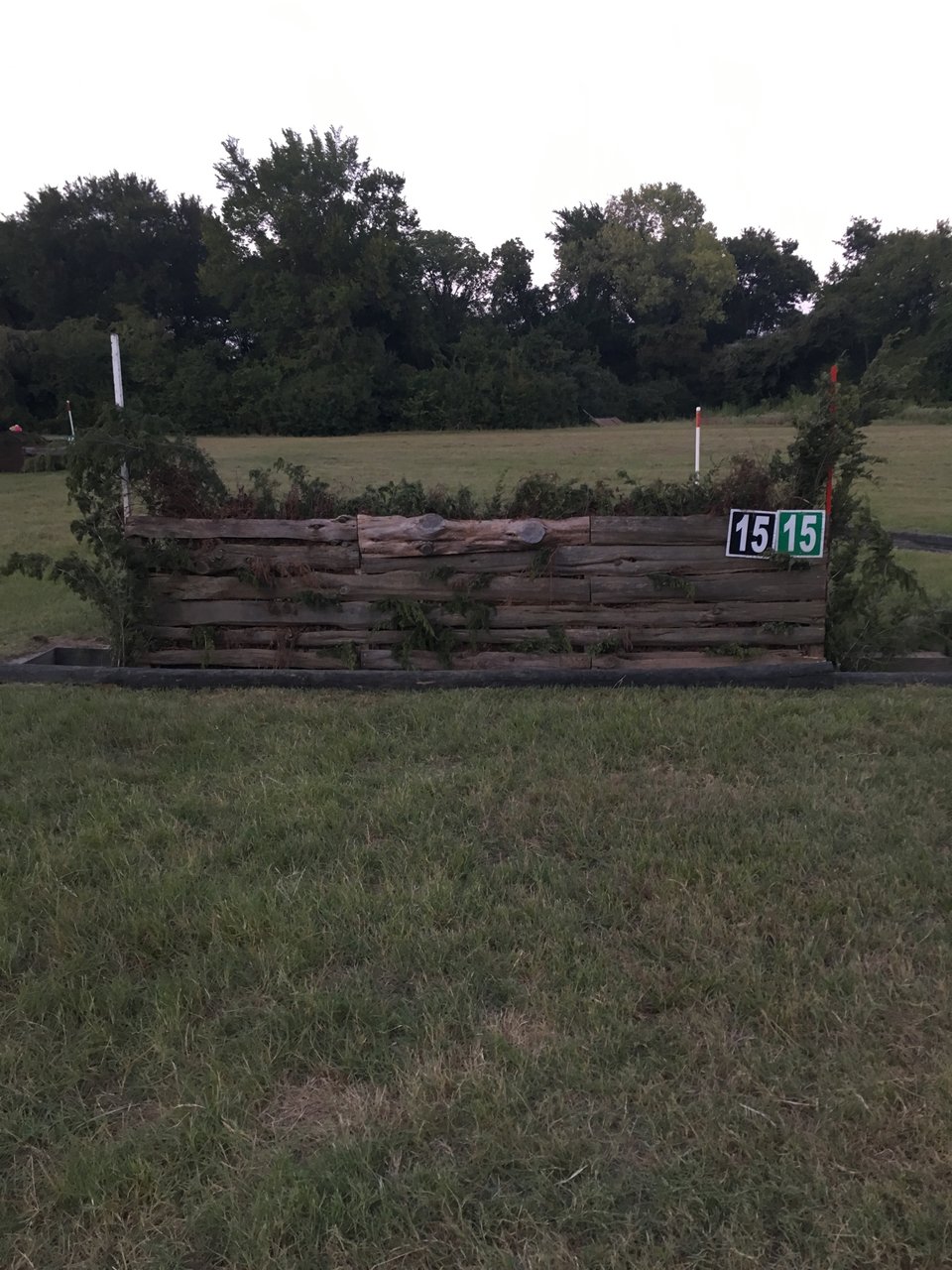 I got so overexcited about not dying at the Weldon’s that I kinda forgot to rebalance for the next little rolltop and we took a bit of a flyer. Oops. Sorry Henny. 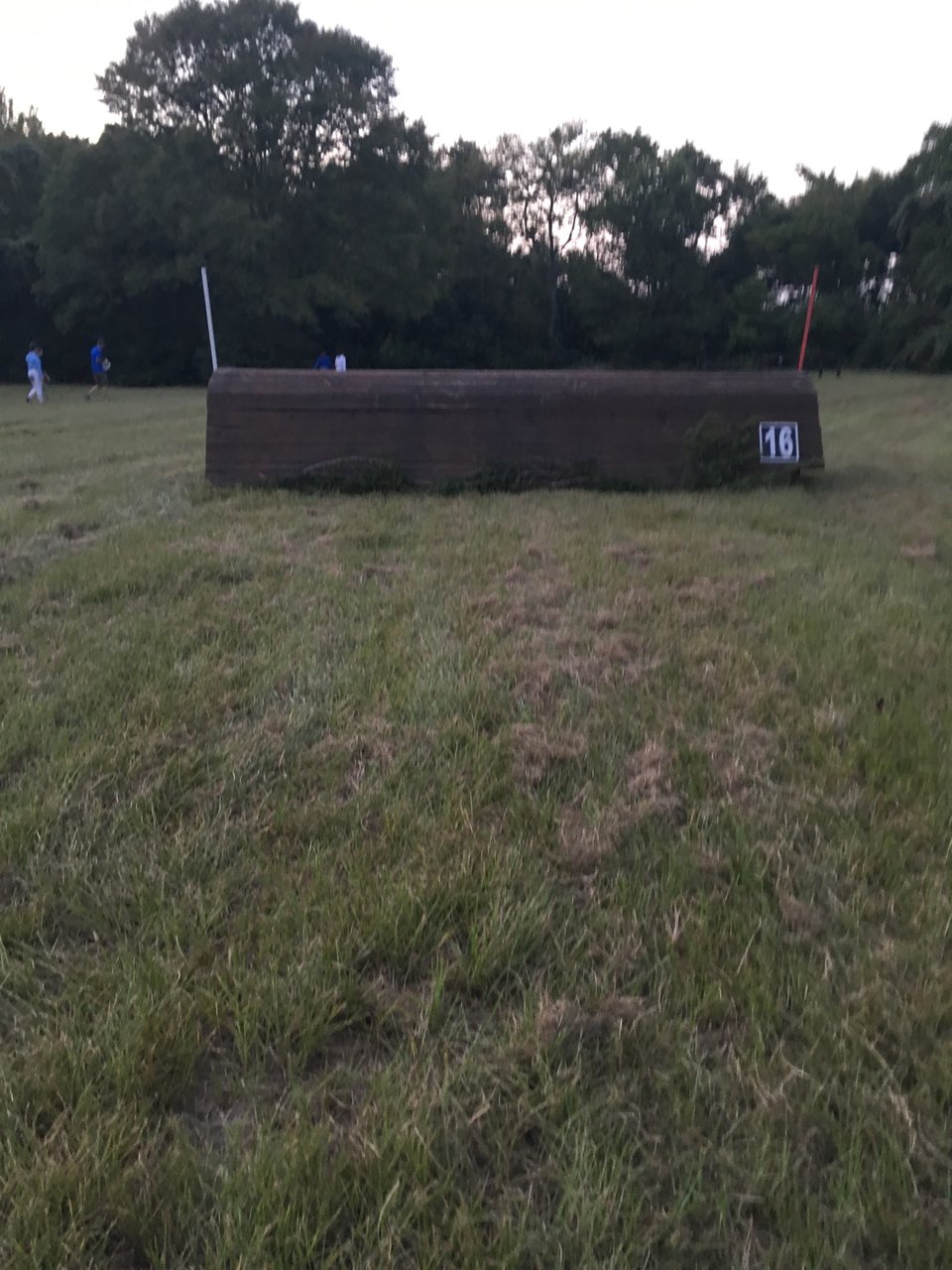 Right after the rolltop I heard my watch beeping for the 4 minute mark. I was like uh-oh… we’ve only got one more jump and the optimum time is 4:40. The twistier stuff at the end didn’t eat up as much time as I’d thought it might. So I brought him back down to a casual canter, loped across the bridge, over the itty bitty last fence (which I think he found insulting), and across the finish. 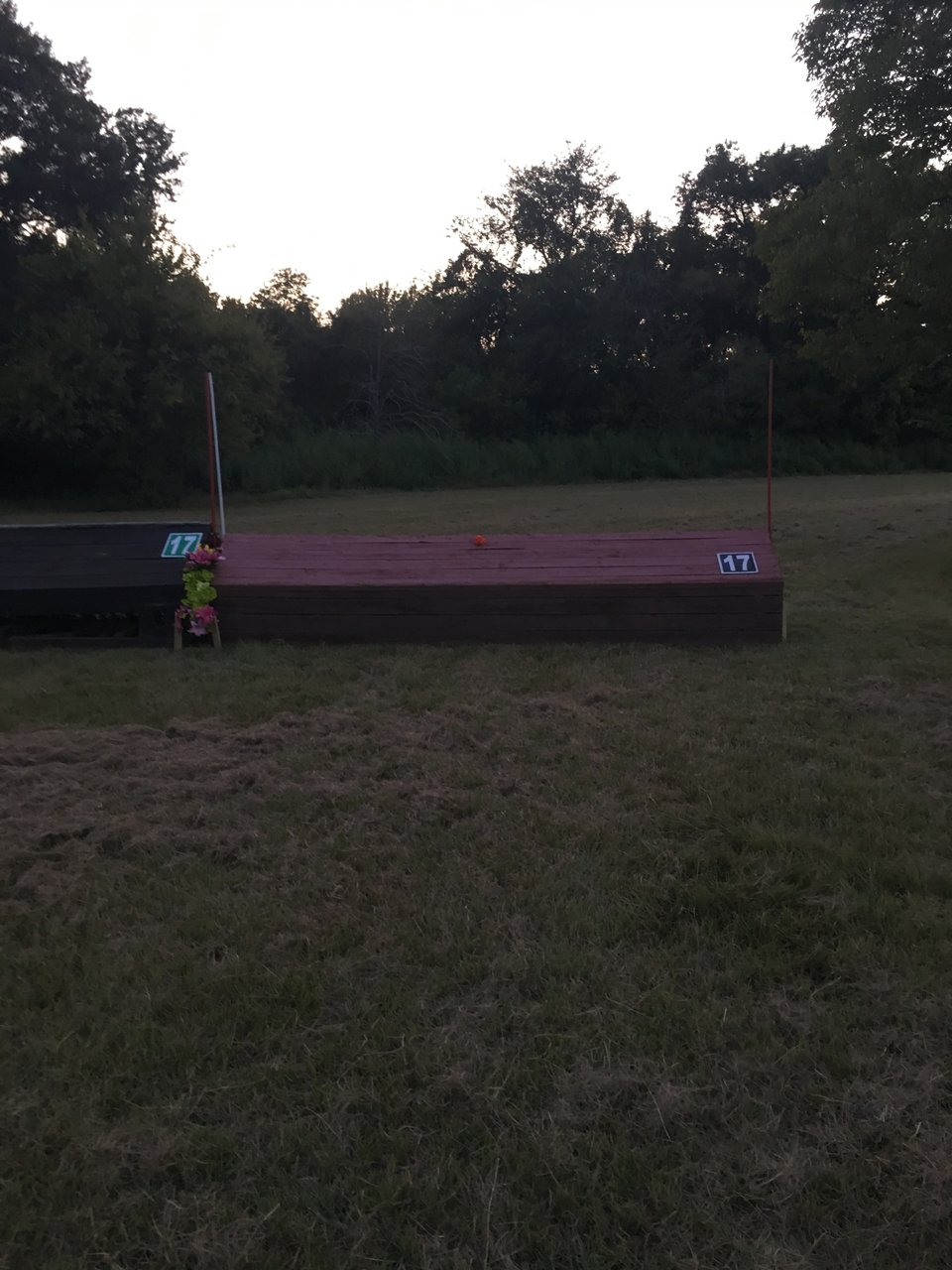 When we finished I had one of those “OMG did I forget a fence or something?”. It seemed like it went by so fast. I quickly took a mental stock of everything and was like no, we definitely jumped them all. I checked my watch and we were great on time, about 15 seconds under optimum for a double clear. Then it was a “HOLY SHIT THAT FELT EASY!”. It was the smoothest cross country round we’ve had in a long time… pretty much everything jumped right out of stride, I followed the plan, we were efficient with our track, and Henry felt absolutely brilliant answering every question with a resounding “I’d be delighted!”. It is such a joy to sit on that horse cross country. It makes all his dressage bullshit worthwhile.

Better yet he cooled out quickly, his legs felt good, and he had enough energy to come snorting and spinning off the trailer when we got home. He still wasn’t the least bit tired.

So now our first recognized Training is officially in the books, and it feels pretty great. Not gonna lie, I got a little teary-eyed on the drive home. Henry and I’s very first event was November 2014 at that same venue, a BN where we had a stop at the little baby down bank. I remember walking that course and saying I would never go Novice, everything just seemed so big and so impossible and so beyond us. Yet here we are now thinking Training seemed easy. Who would have ever thought? That horse is a fat little sassypants but he’s worth his weight in gold.