You know those fences that you look at for years and think “Eff no I am never jumping that stupid thing, it is too big and wide and I don’t want to die”? Ok, I’ve said that about a lot of things. But at Pine Hill there is a Prelim wagon in particular that is pretty much all of my worst nightmares rolled into one. It’s essentially a square table, which I hate. It’s big enough to be like… an actual wagon. I tend to be firmly in the camp of “don’t jump things that could be vehicles or residences for anyone hobbit sized or bigger”. Seems to just be a good life rule, ya know? Right up there with “don’t stick your hand in a fire” and “don’t walk out in front of a bus”. But before we get to that part, let me set the stage for you.

We were out there on Sunday, Henry and two little fresh-OTTB kids. They were adorably (and sometimes hilariously) jumping around the Goldilocks/BN stuff, and I was just kind of there to jump whatever. No need for an intense XC school at the moment, but it’s always good to get out and school a little bit with some kind of frequency. One of the OTTB kids was Trainer’s greenie, who is about 3 weeks into his retraining and was bopping right around with no problem. He’s super quiet and smart and handsome, it’ll be fun to see him come along. 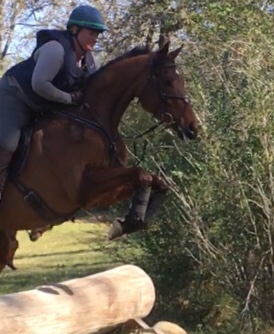 The other belongs to Lofty‘s mom Kathy, who has only had him for a couple weeks but he’s a super bold and willing guy. This one is also quite smart, and looks like he’ll make up to be a cross country machine. He really didn’t even look twice at anything until we got to the little faux trakehner back in the woods, which he took exception to by leaping, like a deer, sideways across it. It was hilarious in the way that only green horses can be, as he was flying through the air to a chorus of shrieking laughter from the peanut gallery (myself included). And if that happens in front of me, I will absolutely Photoshop that picture. Say hello to Blitzen. I love him. (and I have no idea what his actual name is)

So there were those two little green beans, and then Henry and I. I guess Henry was supposed to act as the “big brother” influence but honestly when it came to the whole walking-through-the-woods part, Henry was the spookiest of the bunch. I legit almost went flying off the back of him at one point when he spooked at a bird.

We bopped over a couple little fences to warm up, then Trainer told us to jump Prelim 1 to Prelim 2. We’ve done 1 before, just a big log stack, but I have never been a fan of 2. It’s not as straight-up-NOPE for me as the wagon, but it’s another big square solid table. No one at USEA seems to be on board with my “burn all the tables” idea, so I guess we should get used to jumping them. Plus the fact that we didn’t die over that last huge brush table at Texas Rose has given me a little bit more confidence.

Then we headed to the water and jumped both Training ways through it. I didn’t realize it until we got in, but the recent rains have raised the water level substantially. We got about two strides into the water before it turned into Splash Mountain and a big wave of water came flying all the way up to my head. I was soaked.

I declined to jump the Prelim route through the water. We’ve already done that a couple times before and I had no desire to get any wetter than I already was. For real. I was wiping freezing cold water out of my EYEBALLS.

We kept going around the course to the mound, where the babies jumped a few things. Trainer asked if I wanted to jump the Prelim wagon, which was the only bigger fence in the area. I kinda looked at her, looked at the wagon, had a moment of bravery, and said “sure”. I mean… apparently she thinks I can jump the wagon without dying, the horse feels good today, I’m only halfway shitting myself just thinking about it… this might be as good as conditions ever get. Trainer told me to go check the footing around it first, and I slowly walked over and around it to verify that it was nice and dry, while also trying really hard not to make direct eye contact with that thing. I don’t need to know how big it is. Then I picked up the canter, strapped my balls on extra tight, and away we went.

And we did it! I actually sat up and waited to the base (because it was the only option besides death – amazing how you ride better when there’s no other option) and Henry popped right over like NBD.

I pretty much quit with that and spent the rest of the time enjoying our trail ride through the woods. There was a P combo that we haven’t done and I would like to, but it was down at the crater and the footing was still pretty muddy there. I didn’t think that was wise, so we’ll shelve that one til next time.

I’m mostly still shocked that I finally jumped that stupid wagon – and lived to tell the tale, no less. And it didn’t seem hard. And Henry was ho-hum about it. WTF is even happening? Don’t get me wrong, we are a LONG WAY from even considering jumping around a Prelim for real, if we ever do. We have plenty of issues to iron out at Training. Plenty. And by we I mean me. But it’s pretty fun that we can go out to school and casually jump some of this stuff that is pretty legit and have it not seem like a big deal. It does a lot for the confidence, and makes me love that silly little brown horse even more.