You would think that a horse living in Texas wouldn’t really require that many clothes. Our problem is heat, after all, not cold. Well… normally, anyway. This winter has been nuts by Texas standards.

I can’t really blame Henry’s overly extensive wardrobe on this winter, though. That horse has been accumulating clothes since I’ve got him, and it’s to the point where his pile of blankets is occupying a whole corner of the tack room. This is especially sad considering I just gave away a few blankets and coolers that I wasn’t using anymore. It was a huge struggle to find blankets that didn’t rub him, so we went through 4 of those before I finally got smart enough to settle on his HUG style ones – a turnout sheet and turnout blanket. I absolutely love those things, they were worth every penny and fixed the shoulder rub problem that a bunch of other blanket brands plus a shoulder guard could not. Both of them are teal with orange piping, which isn’t my favorite, but whatever.

Originally he had a nice wool PS of Sweden quarter sheet but when he decided to sprout a butt it looked more like a teeny cape. I was sad to sell that thing. I replaced it this fall with a plain nylon quarter sheet, which I feel pretty meh about, so he might be acquiring another quarter sheet at some point. Really I want what the Brits call a loin rug, that attaches to the saddle… so that will probably happen eventually.

The cooler situation is where things really start to go off the rails. Does a Texas horse need 3 different coolers? Probably not. But he’s got his lightweight knit Saratoga Horseworks award cooler from AECs, which probably gets the most use. It’s the perfect weight for 50’s and 60’s type weather, and I use it as a dress sheet at shows or when we travel, if it’s cool enough.

Then there’s my vintage Miller’s heavyweight wool newmarket cooler. This thing actually has a Miller’s tag on it, so it’s minimum 20 years old. The wool is really thick and warm, really a bit overkill for Texas, but I do seem to break it out once or twice a year. This year it’s definitely seeing more action.

The third cooler I bought because it made me sad. Yeah, I have issues. But it’s an award cooler from the Netherlands for the best jumper foal, and it was for sale on a facebook group for $15. It caught my eye because it was my colors, but once I read the dutch embroidery I had to buy it. I couldn’t stand the idea of a nice award cooler like that ending up as a cat bed in someone’s tack room or something. Presto isn’t Dutch, but maybe someday he’ll wear it and pretend. Let’s be honest, Presto doesn’t know wtf he is anyway, he’s German and American by blood, yet his sire lives in France, yet he’s registered in Belgium. Why not add the Netherlands to the mix?

Then of course there’s the Back on Track sheet, which Henry mostly wears at shows when it’s cold enough, or occasionally at home if they’re stalled for some reason. I got a great deal on this thing and he seems to like it, so it stays. 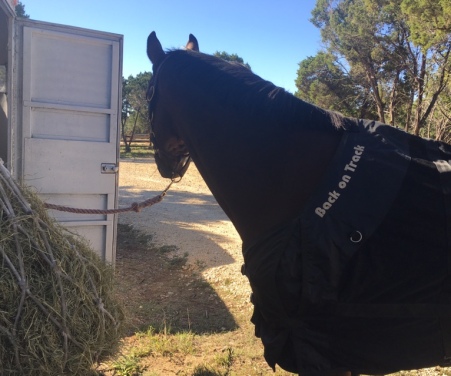 Then of course there’s his oh so attractive sleazy that he wears when he’s braided. Henry already looks like a quarter horse and when you put this thing on it makes it even worse. Totally nerdy but it keeps him from rubbing shavings into his braids, plus it makes me giggle, so it’s earned it’s place.

And then, of course, there’s the bonnet collection. I sold several old ones last year (we won’t talk about how many I bought) so it’s not THAT bad. A dapper horse needs lots of hats, I’m pretty sure that’s the rule. 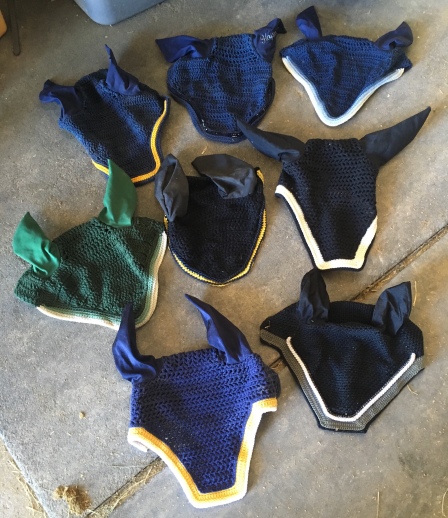 There a still a few blankets and coolers sitting in my garage that I haven’t rehomed yet, but probably need to. I mean… I think Henry is pretty well outfitted at this point. Just wait til Presto gets big enough to have his own wardrobe too (he doesn’t even know how close he came to ending up with one of these this year). That whole tack room will be filled to the brim one day.

14 thoughts on “The Clothes Horse”