If you didn’t read the title to the tune of Bennie and the Jets I’m gonna need you to go back and start over. Don’t worry, I’ll wait.

So anyway, now that everyone will have that song stuck in their heads for the rest of the day, let us continue.

Four years ago, when I first got Henry. he inherited a lot of things from his “sister” Sadie. One of those things was her slow feed hay net.

Sadie was a total garbage disposal, plus she liked to pee in her hay, so she ate out of the slow feed net pretty much every day. It basically just slowed her rate of consumption to that of a normal horse, and made for less waste. When I got Henry he seemed much more normal (HA), and he was at a different barn that had way too many horses for the worker to be stopping to fill a hay net unless there was a really good reason. So Sadie’s everyday slow feed hay net got relegated to being Henry’s trailer/show hay net… basically the only times a hay net was needed for him.

The only problem is that, well, Henry is not the brightest crayon in the box. He’s also extremely impatient. Add those two things together and he just literally could not with that hay net. He couldn’t figure out how to eat from it, and the fact that he could only get a few bits of hay at a time seemed to infuriate him more than anything else. Eventually he’d just quit trying and go stand in the corner and sulk. When a horse won’t eat out of the hay net, it makes said hay net kind of moot.

So I went and got him just a regular hay net, with larger openings.

This seemed to do the trick, at least as far as a) holding hay b) the horse being capable of eating out of it. He did tend to drop a lot of hay in the floor of my trailer though, so I briefly experimented with a hay bag, thinking that one opening might control that a little better.

For a horse that was so incredibly dumb about the slow feed net, it took him all of 5 seconds to figure out how to wiggle his nose into the top of the bag and not come up for air again until all the hay was gone. Like for real he had chunks of hay in his nose. This is undesirable for obvious reasons.

Back to the regular net we went.

That one has served us well for the past few years, but last week when I was getting the trailer ready for our drive to Texas Rose, I noticed that the net was… moldy. I think it must have gotten wet at some point and then sat in the trailer getting nice and toasty. My bad. I was going to take it home and wash it thoroughly but the more I looked at it, the more disgusting it was. AND I have a horse that is super sensitive to mold. AND I was kind of in the eleventh hour, I didn’t really have time to wash it and get it totally dry before we had to go. As much as I hate Dover, they’re the only gig in town and I needed it RIGHT NOW, so down I schlepped to see what they had. Really I wanted one like this one, but their selection is always a little hit or miss.

Yeah no. What they had was a buttload of slow feed nets, in about 10 different varieties. After standing there staring at them grumpily for a few minutes, I just picked the sturdiest-looking one with the biggest openings (that wasn’t a hideous plaid) , hoping Henry could figure it out. 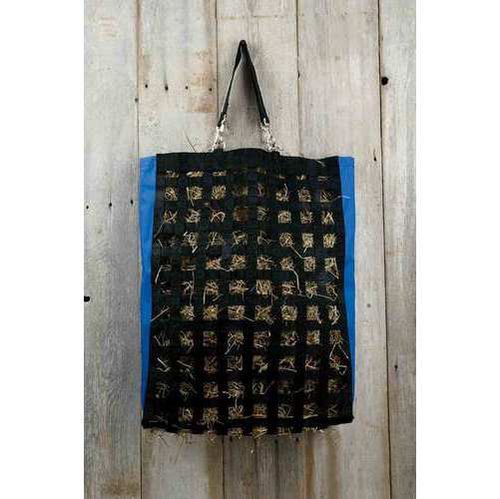 I also unwittingly stumbled into a big seasonal sale, which caused me to temporarily lose sanity and somehow that trip into the store for a hay net turned into a hay bag, show shirt, horse treats, belt, ornament, and U7 paste. Sigh.

Anyway, I was out of time so I tossed the hay in the bag, tossed the horse in the trailer, and hoped he’d figure it out on the way.

Yeah no, we got about 2 hours in before I could see him pawing and smashing his head against the bag. I needed gas anyway so I turned into the next gas station and started pulling chunks of hay partway through all the gaps in the webbing, hoping it would get him started. That did help, but this horse is not winning any awards anytime soon for his brains. In a 4 hour trailer ride he managed to eat maybe half a flake of hay. And he was pissed.

When we got there I decided to leave the hay in the bag and hang it up in his stall, hoping that if it was his only option overnight he would have no choice but to figure the stupid thing out. When I came back a couple hours later to check on him, he had indeed made a lot of progress.

Granted, every few minutes he would pin his ears and try to smash the shit out of the bag in frustration, but he was still eating out of it. No retreating to the corner to sulk, like he did with the slow feed net.

By morning he’d eaten almost all the hay that was in there, and on the trailer ride home he spent pretty much the whole ride sneaking little bites out of it. It wasn’t a consistent or coordinated effort, but no more getting mad and pawing, at least. I’m hesitant to say for sure that he’s definitely figured it out, but at least there was progress. I do like the fact that there was almost no hay wasted in the floor of the trailer, and the hay actually lasted through the trip.

Will this hay bag get to stick around for the long haul? That is yet to be seen, but maybe. I need to use it a few more times to see if he keeps figuring it out or if he just gives up.

Poor Henny. Life is hard, but it’s even harder when you’re not that bright.

18 thoughts on “Henny and the Nets”