I mean, no offense to dressage or showjumping, y’all are great sports in your own right, but literally no eventer in the world is like OMG THAT DRESSAGE TEST WAS THE MOST FUN FIVE MINUTES I’VE EVER HAD. Especially not this eventer. Let’s be clear, we’re here for cross country, these other two phases are formalities.

First of all, I about died on Thursday night before the show even started. It was already dark out, I had parked my truck a little ways from the barn and was almost done setting up my tent. I saw a trailer pull in down at the barn and was so preoccupied by straining to see if it was a friend that I stepped backwards off the tailgate, missed my step, and WHAM slammed into the ground under a bush. My entire spine popped upon landing and all the air went right out of my lungs. Not gonna lie, I laid under that bush for a solid two minutes before I got up. Do not recommend falling backwards off a tailgate. That was worse than falling off a horse. 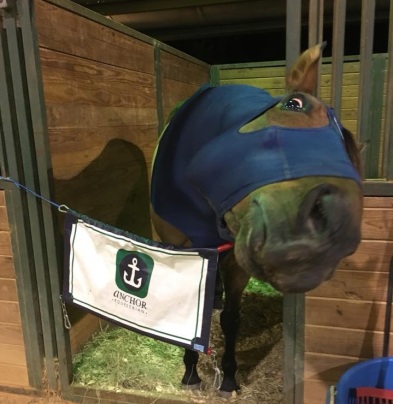 probably wishes he could have seen that, he would have enjoyed it

My Friday morning dressage was at 9:18 so I got on around 8:45. Henry was pretty good in the warm up, more relaxed than when we were there in November. I was happy to see that we got ring 4, which was off to the side by itself, instead of ring 2 or 3 like last time which are right to each other in the same arena at the top of a hill. That was a little too much stimulus for Henry. The first person in our division was a no show at her ride time, so we ended up going a little early. Henry was on high alert as soon as he stepped foot in the ring (I dunno why we gotta pretend to be spooky about the judge EVERY TIME), but he was mostly obedient.

A couple times he tried to sneak peeks at the horses that were hacking up the hill (I think he was trying to figure out if they were getting to go XC while he was being tortured) and the canter lengthenings on a circle were, as usual, pretty non-existent. Training Test A has them both directions, so that’s not particularly helpful to us at all. He was still tense, he is a tense horse, tension is what he does best, but overall it was fine. That’s really the best word for it. Not great, not tragic, just fine. Our division was full of pretty nice horses (one of these days I will remember to STOP ENTERING Senior Training Rider, omg it is always the most competitive division), so we certainly didn’t impress anyone, but for Henry it was a decent test. Our score of 37.7 was totally fair. Once again I forgot to pick up my test but I’m confident it looks like pretty much every other test we’ve ever done. Consistently mediocre… that’s our specialty! It was definitely an improvement from last fall’s test at Texas Rose (where I legit could not even touch him with my leg because he kept threatening to turn into a coked out dolphin), so I’m cool with that.

Then we had a few hours to cool our jets before stadium. By this point I had already walked XC and was pretty pumped about the course, so I was like “Ok, for the love of god, let’s just not get eliminated in stadium because I really want to run XC tomorrow”. Priorities, y’all.

The showjumping course was super legit. It was long, it had a lot of good questions, and it was proving to be difficult. I sat there through all of the Intermediate and most of the Prelim and rails were falling left and right. Jump 1 in particular, a single oxer near the middle of the ring, was getting a lot of people. I made a pretty exacting plan for how I wanted to approach that one to give us the best chance to get it right.

We went in, picked up the canter, and I was like “alright self, keep your leg on, keep a rhythm, sit up, and don’t die. Oh and breathe every once in a while.”. All good goals, ya know? We swept around the turn to the first oxer, I saw the distance come up easily, we cantered down to the base right out of stride, and… wham. Henry hit the crap out of that thing. First rail, in the dirt, for no particular reason at all. I was like what the actual F, man. Even Trainer agreed there was zero reason for that to have come down. Considering how often I watched it fall all day, I wonder if there was something the horses just weren’t reading about the fence. Whatever though, we still had 11 more to jump.

The rest of the course was fine. The rhythm was better, but I was having a hard time getting him rebalanced quickly enough in the lines. That made them all ride a little tight, which finally bit us in one line when we just got too deep and flat to the out. That rail I will definitely take as my fault. My horse is not careful, so if I give him a good reason to have a rail down, he certainly will. We really gotta jump more long courses, my 4 fences at home aren’t particularly fair preparation for either of us with a course like this one. I see some jumper shows in our future.

But there were no spectacular crashes or fails… so like… that’s something I guess? Aim high, kids. Mostly I was just happy to be done with those two phases so that we could finally switch to XC mode and focus on that part. Tomorrow, THE FUN STUFF.