Well, all of y’all that were excited for all the fun stories and fireworks that were bound to commence after Presto came home are about to be sorely disappointed by this first update after week one. I truly expected him to get here and be a total hellion, a whirling dervish of tiny hooves, crazy hair, and teenage angst. Clearly I’ve spent a lot of time around baby horses. They are shits. But so far, none of this has really been the case with Presto.

When we left off after his Day 1 update, I was kinda blown away by how well-behaved he was with the initial move to the boarding barn. I was suspicious. It’s like when a room full of little kids gets really quiet…  that can’t be good. I thought maybe he was just a little shell-shocked and his behavior would deteriorate a bit as he settled in. So far, he’s actually gotten… better.

First of all, he comes up to me in the pasture. We’re not talking a Black Beauty moment where he sees me and comes running, but once I get about 40′ away he stops grazing and meets me halfway. Sometimes I give him an alfalfa pellet, sometimes not. I don’t want him getting mouthy and always looking for treats, but he’s pretty food motivated, like his mother, so I will absolutely use that to my advantage. Plus he’s a little “nose shy” in that he’s been very wary of what you’re trying to do to his nose/mouth ever since he had to wear the muzzle when he was a foal at the clinic. Now he’s letting me poke and pet and touch (and smooch) his muzzle with no real complaints. He used to take a couple steps back when you pulled the halter over his nose too, which has stopped. We played the “nose in halter = alfalfa pellet” game a couple days last week and that plus simple repetition seems to have done the trick.

He’s done a lot in his first week, really. I’ve brought him in every day for grooming and hoof picking and crosstie lessons. One day he was a little distracted by the horse in the stall next to the crossties and we had to have a discussion about the impropriety of swinging one’s haunches around all over the place while I’m asking him to pick up his feet, but for the most part he’s been good. I haven’t actually hooked him up to the crossties on both sides yet, just in case. I clip one side and use his lead rope looped through the stall grate on the other. Enough to keep him still, but not enough to keep him stuck if he does panic. He also definitely cannot be left unattended yet. I get about 6 feet away before he’s dancing around, wondering where I’m going and why he can’t come. We’ll build up, he’s just not there yet. He’s pretty confident in most things as long as I’m there next to him, but not so much once he feels like he’s alone.

We’ve also gotten some practice in the washrack, thanks to a little cut he got on his upper leg. I don’t think he’s ever actually had a bath before so I was prepared for a rodeo. The washrack in general is scary, a big patch of concrete with holey black mats, and several curled up hoses. Not to mention the actual water part. I let him walk up and snort at the mats, then asked him to step forward, and he did so without any hesitation whatsoever. In this way he’s very different from his mother, but I’ll talk about that more in another post. We did half of the cold hosing in the washrack itself, and the other half on the grass next to it where the water kind of puddles, to see what he thought about that. He thinks puddles are cool (yes, baby event horse!). 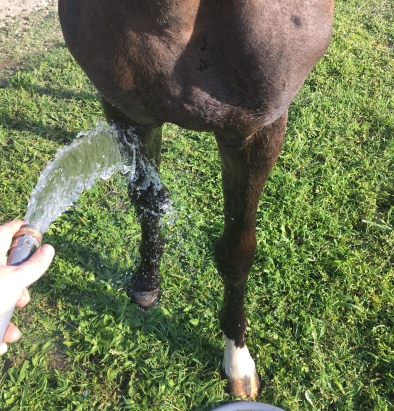 He gave a teeny flinching spook when I turned the hose on, and danced around for a few seconds when the water started touching his foot, but quickly settled. He just stood there for 10 minutes and let me cold hose that leg. I was pretty impressed by that. 10 minutes in normal time is like 2 hours in baby horse time. Everyone with babies knows I’m not even lying about THAT one.

He also wore boots for the first time. Once we’re ready to start ponying out in the fields I want him to at least have some kind of boot on, so I slapped some open fronts on him to see what he thought. He flicked an ear at the sound of the velcro, but that was the only reaction I got about the entire thing. Boots definitely fit him funny right now though… he’s got the cannon height of a normal horse (his legs are actually longer than Henry’s, which I find very comical), but like half of the bone. This age is so awkward.

On Saturday after I got back from the show with Henry, I decided it would be a good day for trailer loading lessons, since I was already hooked up. I REALLY REALLY thought that the only reason he loaded right into my trailer last week was because he was just caught off guard by it. I thought there would be much more resistance this time around. Yeah, no. On the first try he did wiggle to the left and step sideways off the ramp, but I just lined him back up and asked again, and he walked right in. He stood quietly, I rubbed his ears, and then we started the harder part: backing out. Again I have to give his brain so much credit, he definitely wanted to try to turn around, but I just kept backing him and guiding him, one step at a time, and he made it all the way down with no problem. We walked a circle, I loaded him again (walked right in), stood there and patted him for a minute, and then he backed out perfectly without much guidance needed from me. Boy genius right there.

On Sunday I figured I may as well start our first ponying lesson. The arena was empty and Henry was scheduled for a light day anyway. I tacked Henry up, went and grabbed Presto, and led them out together. Sometimes the young ones are a little startled to see a human above them for the first time but Presto was just kinda like “oh hey cool, you’re attached to that horse, that’s neat, can you rub my ears better from up there?” Okay then. Off we went. The first few minutes were a little bit of a circus. I couldn’t get Henry and Presto on the same page. One of them would go one way and the other one would go the other. I was like omg this is what parents of human children must feel like.

So to make things easier I put them both on a small circle, Henry on the outside, and we just spiraled around for a few minutes. Neither of them could really resist, since we were were always turning, but Henry got the idea of being the leader, and Presto got the idea of moving himself in accordance with what the other horse was doing. I slowly made the circle bigger and ta-da, we had it. Henry still wasn’t really thrilled about it, but he sure did step right into the role. “OMG kid, walk faster. I don’t have all day!“. Pretty sure I heard him mumbling something about how in his day he used to have to pony uphill in the snow both ways, kids these days, get off my lawn, blah blah blah. We walked around the ring for about 15 minutes, practicing stopping and turning, and then walked over some poles.

If Presto wanted to get a little too friendly or wasn’t moving away from him appropriately, Henry would pin his ears at him for emphasis but he never once even considered kicking. That grump ass, bossy older brother, tough love persona sure does fit him to a T. We’ll do some more ponying in the ring before we move it outside, and I’d like to borrow a western saddle for the first outdoor excursion, but we’re off to a solid start.

Presto is smart. Don’t get me wrong, sometimes he has an OMG or a NO moment and starts screaming and dancing and being a dumb baby horse, but every time I give him a real task to do, he applies himself and uses his brain and figures it out. He’s a thinking horse, much more than a reactive horse. I keep expecting him to have one of those “checked out” moments, but so far he hasn’t. The barn owner and one of the workers have both come up to me separately and raved about his temperament. Apparently one day they were doing road work, which involved heavy machinery, lots of scraping, and several loads of gravel being dumped and grated right next to his turnout. They said Presto just stood there next to the fence the whole time, watching for hours like it was some kind of very interesting movie.

We’ll keep chipping away at the mundane things and slowly start adding in fun stuff as Presto gets a more solid foundation. It’s going pretty well so far, though! At least for me and Presto. Henry thinks this is some real bullshit.

27 thoughts on “Week One with Presto”