I need to think of a name for this Dynamic Duo. They’re like Tweedle Dee and Tweedle Dum. Starsky and Hutch. Butch Cassidy and the Sundance Kid. Batman and Robin. Abbott and Costello.

This past weekend I was pretty excited to be home and have no other plans. That’s a rare occasion these days. I planned a big, exciting (to me), day of fun (for me) with the boys. Henry worked hard all week so I figured he could have an easy riding day, and Presto desperately needed a bath. I planned to spend a nice long leisurely morning at the barn doing whatever the actual heck I wanted, and taking however long I wanted to do it. Those are the best days.

I showed up before 8 while they were getting fed, so I spent some time organizing and cleaning up my stuff while they ate. A friend let me borrow her western saddle to help make ponying a bit easier, so I cleaned it up a little and went off in search of a pad to borrow. Side note: why do so many western pads have neoprene bottoms, directly against the horse’s back? Is that a thing? I had to dig to find a felt-bottom one.

Then I brought both boys in, tied Presto in the aisle and put Henry in the crossties, just like I’d done the day before. This time Presto found plenty of ways to entertain himself while I tacked Henry up.

Jokes on you kid, I got your brother a relatively indestructible fly mask. RIP to the lid of that supplement box though, that’s going to require a drill and some screws to fix. Although in his defense it was already mostly broken off. Sorrryyyy. Add it to my bill.

It’s been many years since I put a western saddle on a horse, so I had to spend a few minutes remembering, but once it was on I could not stop giggling. Poor Henry gets mistaken for an Appendix ALL THE TIME (which is fair, he looks like one), and putting the western saddle on just took his natural QH-ness up a notch.

Presto was fascinated by the weird new thing that Uncle Henny was wearing. It must have smelled different to him, he’s never seemed interested in my other saddles but he just kept resting his nose on the seat and taking deep whiffs.

Then we went out for a pony session! I had intended to go for a nice long walk on the hills but someone was feeling mighty full of himself and kept trying to nip and play with Henry, so I decided to do a lap of the field at trot to take some of the friskies out. It was more like a Henry trot/Presto leap and canter lap. The good part is, Presto gets tired fast. After a trip up the big hill he decided maybe he should just trot, and after the full lap of the field he thought my original plan of a nice long walk was sounding better and better.

Every once in a while he thought maybe he was ready for another frolic, and Henry would without fail start pushing him over toward the tree line. At one point he pushed Presto right into a bush. Honestly, he had it coming. He was acting like a kid that belonged in a bush. I can’t fault Henry for putting him there.

We spent about 45 minutes out there, and by the end they were both just chugging along like a well oiled machine. It was already HOT though, so they were a pretty sweaty well-oiled machine. This was part of my plan though, because confession: Presto has never had a real soap bath before. I wanted him to be kind of sweaty before we started, so that maybe it would feel nice instead of offensive.

I brought Henry along, because role model, and stuck them both in the wash rack. Originally I had one of them on each side but they kept play-biting at each other and getting each other’s lead ropes over their heads, so eventually I gave up and put them on the same side. Sometimes I feel like the ringmaster of the circus with these two.

The bath itself was actually pretty easy, aside from when I was rinsing the conditioner out of Presto’s tail and apparently shot some cold water up his buttcrack, judging by the way he curled himself up like a roly poly. Whoops. All things considered, though, it was a good first bath and I was able to scrape a lot of that crustiness off of him.

Then I took them both out in the back corner of the courtyard to graze while they dried. I’ve been slowly introducing Presto to the concept of a “drag rope”… letting him drag the lead rope around while he’s loose and learn to not freak out and panic when he steps on it. I prefer to do it supervised, just in case. Each time he stepped on it he figured it out a little bit more and started trying to drag it to the side (Henry has never thought to do that, it was interesting to see Presto’s smarts at work!), and by the end if he hit resistance you could see him trying to figure out which foot to pick up to free himself. 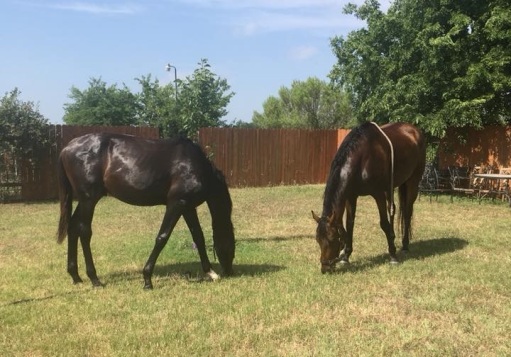 Of course, Henry tried to exit stage left during all of this and take off for the barn, until he realized that Presto was still just obliviously grazing next to where I was sitting. Henry stopped, looked at Presto, looked at me, and came walking back in a huff. So much for the grand escape. From babysitter to instigator and back again, all within 2 seconds flat. Never change, Henny, never change.

After that Henry was shopping for new friends, because apparently Presto betrayed him.

The boys went back to their stalls after that, since it was already getting really hot. Oh, and I did actually stick both of them. For some reason I had it in my head that Henry was 16.1h, and I don’t think I’ve measured him since the day I brought him home. I’ve been shorting him all this time – he’s actually 16.2h on the dot. As for Presto, he’s 15.0 1/2 right now, which means he’s grown 2″ in the past 4 months. That’s not hard to believe. He doesn’t show any signs of slowing down either, if the sudden re-appearance of his ribs is any indication. The growth spurts are constant. His dam seemed to do all of her growing at one specific time of year and not really grow at all in between, but Presto seems like more of a slow-but-steady type.

It’s getting to where he looks more and more like a horse and less and less like a foal. Ok, maybe not horse… maybe giraffe, or llama. But not a baby, either way.