Several people asked me to post my impressions of the Quick Knot once I’d had a chance to try them out. I haven’t actually shown in them yet, but I did pop a couple braids into Henry’s mane the other day and go for a ride, so I’ve definitely at least got enough feedback about them to hopefully be helpful to those of you who were curious.

First: keep in mind that these ship from the Netherlands (yeah, even when you order from the USA site) so order them at least a couple weeks ahead of when you need them. Mine took about a week and a half to arrive, which isn’t bad from Europe at all, but if you’re expecting 3-4 day US-based shipping, you’ll be kept waiting.

I’ve been eyeballing these things since they first hit the market last year, but the price has always kept me a bit hesitant. At $40 for a pack of 100, they aren’t that cheap when it comes to braiding implements. And while they say you can get at least two uses out of each piece, it still made me wince a bit. I mean, $5 for a pack of rubberbands or $15 for a spool of nice waxed thread are prices that I’m more accustomed to for braiding products. At my core, I am cheap. 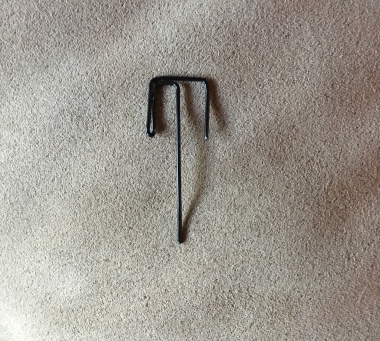 But I friggin hate sewing in braids, and I also friggin hate rubberbands for about a thousand reasons, so finally I just said screw it, had a “Treat Yo’self” moment, and bought the overpriced paper clips. Well, ok, first I did try following a suggestion I saw online that said to do the same thing with bobby pins going up through the braid and then an “arm” bent to each side, but a) it didn’t blend with the mane very well, the bobby pins were pretty clearly visible even from 10′ away b) it didn’t seem very secure. So after that I said fine, admitted defeat, and ordered a package of Quick Knot.

I got a good giggle out of the fact that the customs form listed them as “paper clips”, but really that’s kinda what they are. They’re very simple little things, basically just a little metal T that you stab down through the braid and then bend the end up to lock everything in place. I wish I’d come up with this, the profit margin has to be great.

My main concerns were that a) the metal piece would look like a big staple from the backside, b) they wouldn’t stay in. So the day after they hit my mailbox I took them out to the barn and popped a couple braids in Henry’s mane at 5:50am before our ride. He eyeballed me hard. But the first thought I had was “wow, that was fast!”.

So after taking the obligatory photo of the first braid, I turned on my phone timer and did the second one. Despite some fumbling with the rubberband that secured the braid itself (#manhandsproblems), it still only took 41 seconds start to finish. Rolling up the braid and securing it was ridiculously easy. The Quick Knots were stiffer and harder to bend than I had anticipated, but I quickly got the hang of how I needed to manipulate it to secure the braid. They blended pretty darn seamlessly into Henry’s mane though, making them almost invisible. 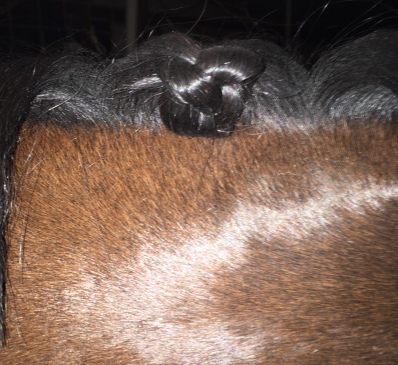 BUT WOULD THEY STAY? After a 45 minute w/t/c conditioning ride, those buggers didn’t even move. And taking them out? 5 seconds, including pulling out the band securing the braid. I hesitate to say that I’m sold until I actually use them at a show, but my interest is hella piqued.

My only real complaint so far, aside from grumbling about the price, is that I absolutely hate the container they come in. I wish they came in a nice, thick, sturdy zippered bag like some of the bands do. If you tried to use these at a show, out of that cumbersome box, they’d be all over the stall floor in 2 minutes flat. And that thought makes me more than a little nervous, being a piece of metal. I’ve already transferred mine into a baggie.

In trying to justify the price to myself, I did a little math (oh dear god). I bought the package of 100, and let’s just say that I put in an average of 15 braids (I usually have 10-12 on Henry, but erring toward the side of caution). That’s 6+ uses if I only use each one once. If I use each one twice (I’ll probably try for 3 times but let’s account for some losses and/or failures here), that’s 13 uses. Aka 13 times being braided, which for me is 13 shows. That’s about 2 years, at the rate I’m going. 13 uses equals out to about $3 per use, or if you’d rather break it up by year, $20 a year. Definitely nowhere near as cheap as bands or thread or yarn, but a palatable cost. Especially when you consider that it should save me at least 10, probably more like 15 minutes per braid job. That’s over 2 hours of my life that I get back.

So, I’ll come back to these and update you guys again when I’ve used them more, but for now the first impression is generally positive. Hopefully they don’t let me down! We’ll find out at Chatt. And next weekend at FEH… but more on that later. 😉