One of the perks of all these orders I’ve been placing lately for trailer stuff is that I’ve also been able to toss in a bunch of small things that I’ve been wanting to buy for a while, but just haven’t. Either they’re items that wouldn’t get used a lot so I always forget about them, or they’re really small things only available a few places and I never had enough other stuff to order that could justify it. Because if there is a free shipping minimum, it’s like CHALLENGE ACCEPTED. But then I’m picky and can talk myself out of things just as easily as I can impulse add-to-cart, so it inevitably turns into an hour-long ordeal and I just give up. The complicated online shopping life of moi.

One thing I’ve been meaning to buy FOREVER is the portable hanging tack hook like my trainer has. Every time we’re at a show together and she hangs that thing up I’m like omg I want that, look how much better that is, why don’t I have that. And then the show is over and I go home and literally never think about it again until we’re at the next show.

But I was ordering a couple of small things from Big Dee’s the other day, and set off on a quest around their site, looking for a few more things to add to my cart to hit the $70 free shipping minimum. My general approach is to browse through the site, add anything to the cart that I might need/want, and then go back to the cart at the end and start ruthlessly cutting whatever things I can’t really justify. Because that first pass always ends up at like $200+, and that’s dumb. Tell me I’m not the only one who does this?

Anyway, as I was kind of mindlessly scrolling through the barn stuff, I spotted the folding tack hanger that Trainer has, and right below it, the tack hook. It all clicked and I finally remembered – OMG MUST BUY THIS, and was all too excited to add it to my cart. For a total investment of $15, I’m way more pumped about this thing than anyone sane would be. Especially because the PS of Sweden bridle crown is too wide for the stall front bridle rack that I had been using, and at Chatt it fell off that damn rack, into the dirt, right after I’d just finished cleaning it. Never again! The hooks on this prong are wider, plus its so much easier to clean the bridles when they’re hanging up at eye level and away from the wall.

I also tossed a Tiger’s Tongue into the cart, because I’ve heard people raving about this thing for a while. I decided I had to see what it’s all about. I’ve only played with it once, but so far I’m pleased. It really does do a great job with saddle marks, leg mud, and skin funk, at least, better than the jelly scrubber does. I could see using this for a wide range of things from soap baths to scrubbing buckets. We’ll test the bath theory today.

On one of my many Amazon exploits I finally remembered to toss a heavy duty expandable hose into the cart. I’ve been saying for THREE YEARS that I need to get a hose to bring to shows, because several times I have found myself right next to a spigot but without a hose. It was just kinda the same situation as the bridle hook… out of sight, out of mind. I have one now though, which probably guarantees that I will never find myself stabled near a spigot ever again.

Yesterday I had a SmartPak gift card, so I finally caved and got the navy halter that I’ve been eyeballing since they first released it. Since I’m also on a “horse show stuff” kick, I was waffling about throwing this folding clothes rack in there. It would be nice to have somewhere better than a bridle rack to hang my coat, xc vest, helmets, etc, especially where they aren’t touching the usually dusty/dirty stall front. I just couldn’t decide how I felt about it though (it seems kinda big?), so in the end I decided to hold off. Does anybody have that rack, or use something else for hanging clothes near their stall at shows? 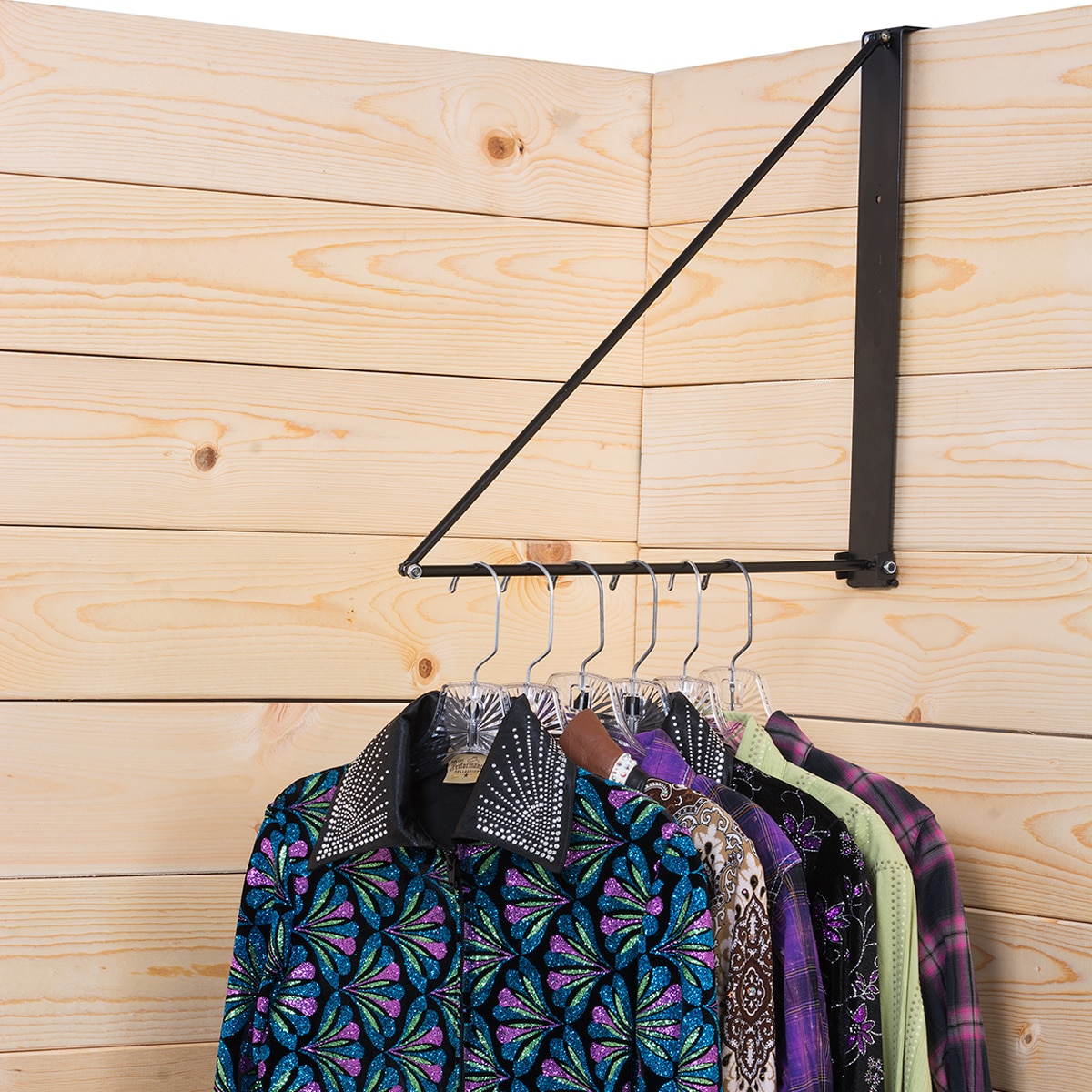 Mostly I’m trying to use this “trailer prepping” time to also re-think and re-organize my horse show setup as well. Do you have any cool little racks or tools or organizational items that you find to be super helpful at shows? I have saddle racks, and my cool new bridle hook, but maybe there’s another super handy thing that I’m missing out on. It’s just gotta either be collapsible/folding or small enough to easily pack in my trunk!

23 thoughts on “Doodads and Doohickeys”