Presto officially has three horse shows under his girth now! Wait, can I even say “under his girth” when he’s never actually worn a girth? His figurative girth, I guess. I took the day off work on Friday because I’m still barnsitting, and there’s just no way that I could do all my barnsitting chores, go to work, and get the baby horse cleaned up and to a horse show in the afternoon. Just no. Also I’ve worked there for like 100 years and have way more PTO than one person could ever actually use, so why not. What BETTER reason to take a day off work than “omg I just have so much horse stuff to get done”?

The show office called me in the morning while I was mucking stalls, asking if I was still planning on coming. Apparently there was only one other horse, a 3yo, entered in the hunter breeding, so if I wasn’t coming they weren’t going to have it. I assured them that yes I was still coming, and that whoever owned the 3yo was welcome in advance for making the division and giving them the Best Young Horse title. Ha. Just Kidding. But not really, because Presto = Not Hunter. Also yearlings basically never beat 3yo’s, because have you ever seen a yearling? Especially next to a 3yo?

Anyway… they were able to give me an estimated start time for the class at least, and I worked my plan backwards from there. Luckily that particular show is only about a 20 minute haul, so I could take my time and get to the barn, bathe Presto, chop some mane off, clean his bridle, etc and not be rushed. His pretty new cob size Lund bridle came just in time, and in my as-always totally unbiased opinion, he looks adorable in it. Although he’s already pushing the boundaries of the cob crownpiece and browband… I doubt we can get more than 6 more months out of those parts. The noseband and cheekpieces have plenty more room though! 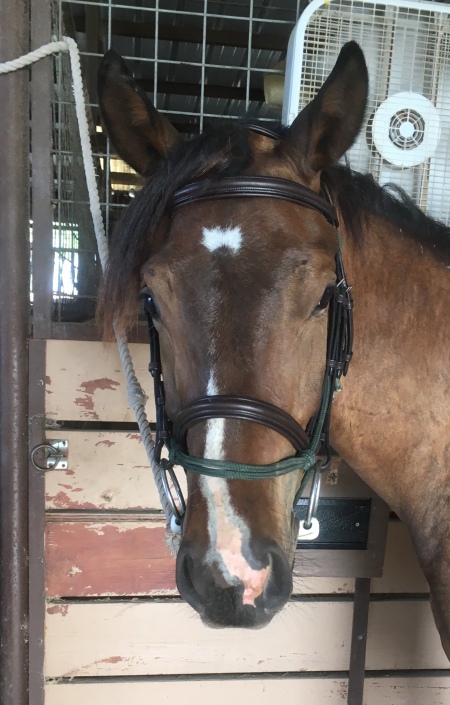 Presto was not that enthused about his mini spa day, but I had him as spiffed up as he was gonna get. Every day he looks a teeny bit better, but he’s still mega-faded and in need of a topline. Oh well. Yearlings. I loaded him in the trailer 10 minutes ahead of schedule and made the trip with no problem (maiden voyage for the new trailer with a horse inside!). I checked in, got my number, put his bridle on, unloaded him, and then took him over to the big main arena so he could take in the atmosphere and watch the last of the o/f classes.

We hung out for a while, just watching the other horses, until it was time for the breeding class. He neighed a little, but otherwise was very well behaved. Since I was the only yearling we were the winners by default (wow, go us) which bumped us on to the Championship class, which of course the 3yo (who was big and fancy and huntery and CUTE) won. We weren’t there for that part, I know Presto is not really what the hunter crowd is looking for. We were there for the commotion and the ring time. Presto stood pretty well for judging and then walked and trotted quite politely in hand. I have no complaints about his performance or manners in the ring, although outside of the ring he was definitely more anxious in general than he had been for his FEH class a couple months ago. It was subtle, but I could see a difference in his general demeanor. He still got many compliments on his excellent behavior, which is a testament to what a good boy he really is.

After the class when we all dispersed, Presto got a little upset about where his new BFF was going and why I was taking him back to the trailer (the only trailer in the area, no less) alone. He was distracted, a bit pushy, and slightly reluctant to load. It probably took me a minute and a half, whereas usually he walks right in. I just waited him out, and we were on the road and back home in no time at all, although Presto stayed a bit unsettled and keyed up, pawing off-and-on during the trip back.

From Presto’s side of things, I have no complaints about how the outing went. However, I feel like I could have done a better job of getting his mind more focused and making it less stressful for him. I think I get so used to how easy Presto is to deal with on a daily basis that I tend to forget he IS just a yearling, and horse shows are still new and different. He’s also still a colt, and while he’s never in his life acted even a hint studdish, those hormones are still there and could possibly affect his behavior, even if only in more subtle ways (like more anxiety). I need to always be hyper-vigilant about setting him up for success as best I can – especially away from home. Next time instead of getting him out and taking him straight for a bath, I’ll do a little bit of groundwork with him, let him move his feet and relax his brain, get him thinking and focused on me as his leader and companion, and then tackle the show prep. Also, when we got to the show grounds, same thing – I should have worked him a bit more in hand to keep his brain occupied and get him more focused. That always helps the babies relax and look to the human for guidance, I know that, and I feel like I didn’t do my part this time as well as I should have.

So, I’m really really glad we did this. I think now I have a good idea of what we need to work on before FEH Championships, and what I need to do better to prepare him properly both before we leave and while we’re at the show. Granted, FEH Champs will be his first overnight show, so things might be a little different, but I’m going to take what we learned here and keep it in mind as we move forward. He’s really a super good kid, I just need to make sure I’m doing everything I can to keep him that way! He’s also building quite the resume for himself now… in-hand trail: check, future event horse: check, hunter breeding: check!

19 thoughts on “Presto the Not-Hunter”