While Presto was walking through water, wearing a way-too-big surcingle, and learning about ground driving, Henry was having a different weekend experience. Well… slightly, anyway.

You already heard about the Friday afternoon hack with both boys. While Presto was falling on his face, Henry was plodding dutifully along, up and down the hills, with few complaints. That horse really does love to hack out, he’d stay out there all day.

Saturday was his second visit from the new farrier. Even though it will take us a few cycles to really get Henry’s feet where we want them to be, I was already much happier with how he’d felt and looked throughout this first 5 week cycle. The first couple weeks were like a whole new horse, I could immediately feel more shoulder freedom and better/quicker breakover behind. Around week 4 he started forging a little bit on our long trots out in the field, but he never got to where he was looking super long or unbalanced, or felt wonky. That makes me MUCH happier.

The farrier was able to continue taking things in the right direction. shortening the toes up more and encouraging the heels to keep growing. Henry needed to be drilled and tapped this cycle too, with show season starting back up, and I was really happy that the farrier countersunk the stud holes and checked each one with an actual stud before he put the shoes on. That makes things easier for me. There’s nothing worse than getting to a show and finding you’ve got a bum stud hole. 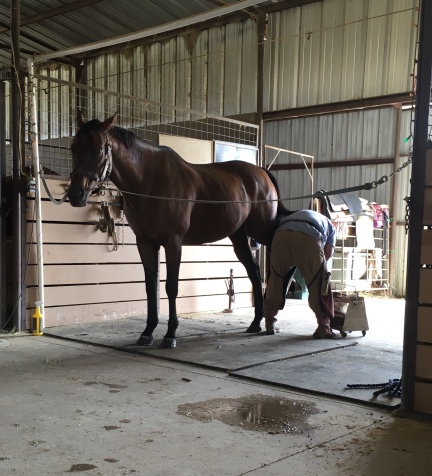 He did charge me quite a bit more this time than last time, which I didn’t really realize until I went back and looked at how much I paid the first visit. This time was like $100 more. I guess that’s what I get for thinking he didn’t charge me enough last time lol. But both boys’ feet look massively improved already, so I can’t complain too much. If anyone in the Austin area is looking for a good farrier, I would definitely recommend him. He was even early for our appointment. What sorcery is this?

After the farrier was done I tried to get on and do a productive dressage ride in the arena but someone was so wild from the cold front that he just kept turning into a dolphin, so I gave up and let him canter for a while. Sometimes there’s just no point in forcing the issue. 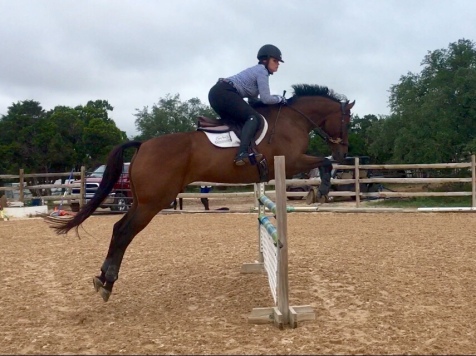 On Sunday we were up bright and early (more accurately: dark and early) to head down south for a jumping lesson. We needed one. Badly. Since Chatt, in early July, I have jumped a grand total of twice at home and 3 times in XC lessons. Our first fall horse show is 2 weeks away. We should prooobably get on that. No wonder stadium is our worst phase.

As soon as I started trotting, my Trainer proclaimed that Henry looked the best she’s ever seen him. I told her that he’d just gotten shod again by the new farrier the day before, and agreed that he’s feeling so much better in general. Amazing what having balanced feet will do, eh? Especially having the hind toes shorter and more squared off, he’s feeling much stronger behind.

The lesson went decently enough. Trainer is kind of mean in that she doesn’t give me a smaller course anymore, I get to pop over a little fence a few times for warmup and then we go straight to a bigger course. Which is actually fine, because (no one tell her) I find the bigger fences to be a little easier to ride. You have fewer options when they’re bigger – better sit up and go forward. And I have to give Henry credit, even with so little jumping in the past couple months, he always picks right back up where we left off.

But in my case it means that I’m still having all the same old struggles. Controlling my upper body better. Half-halting sooner. Keeping that inside hind underneath him in the turns, and thus keeping his shoulder and poll up. Not getting weak to a deeper distance. All the things that I know and have heard a million times but still struggle with anyway. Now that the ground has softened up a bit and I fixed my jump course, we’ll be jumping once a week again. I get so freaking annoyed with myself making the same damn mistakes over and over.

Henry was great though, I have no complaints with him. We had some rails but they were my fault. I think we’re both starting to figure out the ride in the hackamore, though. It’s a little better. It’s definitely not there yet – my timing is even more important when we’re bitless – but it’s improved.

When we got home Henry proceeded to find the only muddy spot left in his turnout and roll in it. Pretty sure he was looking me in the eye the entire time he was grinding the mud in. That’s okay though… between me and Presto he puts up with a lot, so he definitely deserves a nice roll in the mud every once in a while.

13 thoughts on “A Tale of Two Weekends: Henny’s Story”