When I started blogging, there were a lot of things I never considered. I wasn’t really sure how long I would keep it up, but I was definitely sure that no one would actually read any of it. Four years later, I’m still always surprised to realize just how many people DO eventually find their way here, somehow or another. If there’s one thing I’ve learned for sure, it’s that there is nothing low profile about chronicling your life on the internet for any and all to see. At this point I just assume that everyone reads everything… vet, farrier, trainers, clinicians, friends, family, people I ride with… you name it. And I’m continually surprised at how often I’m right. Word gets around, that’s for sure.

There are pitfalls that come along with that, of course. The biggest struggle, that I think all bloggers can identify with, is deciding just how much to share. On one hand, you want to be brutally honest. Life isn’t always rainbows and butterflies, progress is never linear, and no one wants to read about someone who sugarcoats everything. I sure don’t, anyway. But at the same time, do you really want to put every single little detail out there on the internet? Putting yourself out there like this opens you up to a lot of criticism… I knew that going in, and I’m ok with that. That’s part of it. But at what point to we get to preserve some of our own privacy?

The other side of that coin is – at what point do we have a responsibility to preserve the privacy of others? This is a tough one, and there’s not always a black and white answer. Some people don’t mind being mentioned here. Others see it as a gross violation. And if I have something less-than-nice to say about someone in my life, is it fair to drag them through the mud here? It’s a sticky subject. 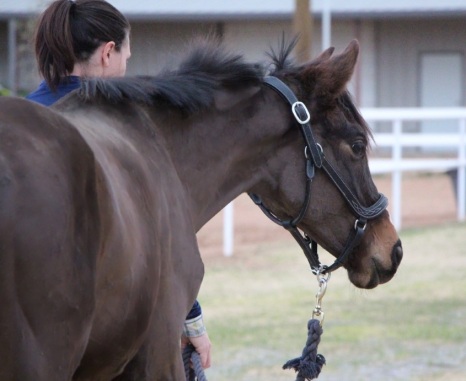 I definitely haven’t shied away from criticizing a couple of public figures in the past. If there’s some kind of controversy making the news, and I have an opinion about it, I’ll probably write about it. To me that seems fair enough (although plenty of people disagree with that, too). But if there’s something going on with me privately, either with a barn mate or a professional in my life, I try very hard to keep any details of those situations out of this space. And I certainly won’t write anything that I wouldn’t say to someone’s face, because I HAVE to assume that whatever I write about someone, they will eventually see it. I feel like I have to be able to stand behind whatever I write, unequivocally.

So, if someone at the barn takes my hoofpick, or if someone cuts me off in the ring, or said something rude to me, or if I feel otherwise “wronged” in some way like that, 99% of the time you’re probably not going to read about it here. Not in anything but a most vague and passing sense, anyway, and definitely not with any of their identifying details attached. Mostly because I think it’s rude AF to talk about people like that on a blog, rather than just working it out with them in person. But also because I feel weird about mentioning people on the blog anyway, even if it’s to say nice things. Privacy, and all that. I mean, clearly I’m not private, but some people are, and I feel like it’s important to respect that.

Of course, there are no rules about things like this. Everyone is different, has a different approach to blogging, and there’s not really a right or wrong answer. Some people do things differently, some share more, some share less, and others don’t shy away from criticizing the people close to them. It’s something that I find myself pondering a lot, though. So I’m wondering – if you’re a blogger, how do you feel about this? Are there certain things you try to stay away from? And if you’re not a blogger – where do you think the line is as far as privacy goes?

32 thoughts on “The Responsibility of being “Public””