Sometimes I’m really good about getting as much media as possible for these show recaps. Other times I’m not. This instance is the latter. Well ok, I did just buy 10 pictures from the show photographer but I’m not sure when those will get here. Didn’t get much media of my own though. Part of it is that it was a one day event, with all 3 of my phases set within a 3 hour time span and everybody else was just as busy. The other part of it is that I was totally not focused on anything but riding, mostly because I wasn’t feeling uber prepared to start with. I didn’t even look up my dressage test until I was at the show on Friday. This show really snuck up on me out of nowhere.

I did a quick stretchy w/t ride on Henry Friday morning at home, then loaded all my stuff and made the 4 hour trek up to Willow Draw. We were one of the first ones there, which was nice, but it did mean that we had several hours to wait before Trainer and the rest of our group arrived. I walked my XC course once while I waited, then we walked it with Trainer when she got there. There were a few big fences on course, but most of the challenge really seemed to lie less in the height and more in the terrain and the approaches to the fences.

A lot of jumps were set in such a way that you really couldn’t get straight to them, at least not from more than 5-6 strides away. Even the first fence was at quite an awkward angle out of the start box, and then there was a Trakehner early on course at fence 3. Between 5 and 6 was a long, steep hill, with a big table at the top, followed by a quick right hand turn to a sunken road to skinny-ish fence. The only one that had me a little worried though was 11, a big (Like boob high. Official measurement.) brush fence. The fence itself was fine, but it was at the end of a little path through the woods, and it was angled in such a way that you better be really darn committed and straight. You had no choice but to jump it on said angle, and if the horse didn’t get their eye on it before you popped out of the woods, a righthand runout would be really easy.

It wasn’t a huge fence to huge fence to huge fence type of course like we’ve seen before, but there were definitely some sneaky, creative little tweaks with placement and terrain that made it trickier than it would appear just from looking at the fences themselves. After we walked the course (and got assaulted by swarms of mosquitoes that may have been big enough to qualify as birds – I’M STILL ITCHY), we did a quick flat school, then tucked the horses in and went to bed.

My dressage was at a very reasonable 9:20am, so I had plenty of time to feed, take Henry for a walk, and braid on Saturday morning. I got on about 25 minutes before my ride time, let him canter on a loose rein for a few minutes, and then started putting him together. I didn’t feel like he was quite as connected or loose in his back as he was at Chatt, but he was being very obedient. The test itself went pretty much the same way – he definitely didn’t feel as loose and relaxed as he has the past couple shows, but he did everything I asked. Except for that second canter-trot transition at X where he threw in a flying change just before we trotted. Oops. That particular movement earned a 4, with the comment “flying change not called for”. Whaaaaat, no bonus points for flair? C’mooooon. I think if I could have done my morning pre-ride like we did at Chatt, it may have helped him relax a bit, but having all 3 phases in one morning meant I had to put my priority on reserving as much of my horse’s energy as possible, especially on a fairly warm day.

Even with that flying change bobble, and with Henry not feeling quite as good as he can, we still got a 32.1 to be sitting in 2nd after dressage. We had a couple 8’s, a lot of 7.5’s, and a couple 6.5’s. Plus that lovely 4 for our “not called for” lead change. The judge liked that I was bold on the lengthenings though. This is the 4th show in a row where we’ve been near the top after dressage, instead of mid-pack or closer to the bottom like we used to be. I much prefer this position, I must say, although I do feel a little more pressure to not do anything too stupid. Like at week 2 of Chatt, where I missed to the up bank and tried to kill us, thereby sacrificing our 3rd place…

Anyway, I didn’t have much time to stew on the dressage, really, because stadium was next. We all went to walk the course after I was done with dressage, and it definitely had me raising my eyebrows a bit. The course was set on a grassy hillside, so terrain was going to be very much a factor in how everything rode. Uphill, downhill, a tree in the way, on the side of a hill – you name it, pretty much every fence had some kind of terrain question involved as well. Because of this they seemed to set the fence height a bit soft.

We walked when it was set for Prelim and it looked more like a beefy Training to me, which honestly had me a bit worried about how they’d look once they went down even more for Training. I generally do NOT ride well when I think the jumps look tiny. At all. I need something that makes me sit up and ride up to it. And Henry seems especially unimpressed and lazy when they’re small and boring. I was also wondering how all these terrain changes were going to work for me, on a naturally downhill horse, wearing a very loosely fitted hackamore. Not gonna lie, I had visions of rails flying everywhere. I put his studs in before stadium, to give us a little extra help on the grass and the hills.

Honestly though, I think the terrain changes actually worked in our favor. I really had to focus on trying to keep him balanced as we went up and down, but still forward and positive, to the point where the jumps were more of an afterthought amidst all that. I knew that the hackamore wasn’t going to give me much help, so I was forced to use my seat and my body instead. Basically, the technical challenges of the course kind of forced me to… ride better. And let’s be honest, I REALLY needed to put in a decent stadium ride at a show for once. 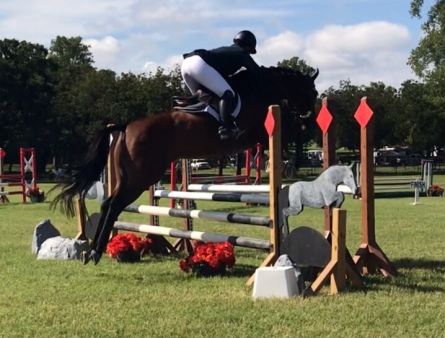 He still ticked a couple of them hard enough to make me think at least one might have come down, but luck was on our side that day, and though one or two definitely rattled, they all stayed in the cups. Finally, FINALLY, a clear stadium round at a recognized Training. We’ve managed a few clean rounds at schooling shows but never put it together at a recognized. It was starting to feel like a curse! With a double clean round we kept our 32.1 and our second place position headed into XC.