I suppose the good thing about showing more often is that you don’t really have a lot of time after one show to think about the next. It feels like we just got back from Holly Hill, but here I am doing laundry (I decided I hate everything white) and getting ready to leave on Friday for Texas Rose. This is our 2/3 move up, doing Prelim stadium and dressage and Training XC, so I really wanted one more stadium lesson before we go. The only time we could really fit it in was on Tuesday afternoon, but considering I have so much leftover PTO that I’ll never be able to use it all, it worked out great. Hillary and I loaded up the horses and drove 2 hours down to Trainer so we could both have a lesson. 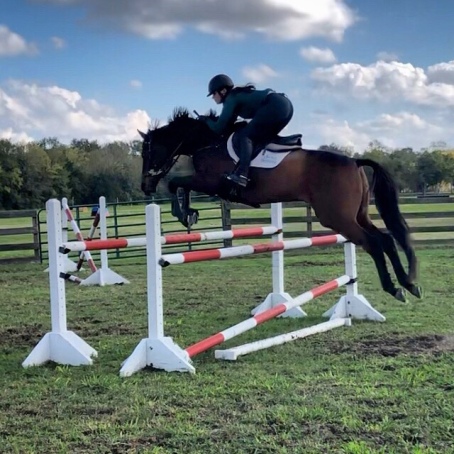 Hillary jumped Annie around some Novice size courses (not that Annie ever clears anything by less than 2′, pretty sure she’s jumping Advanced most of the time regardless of jump height) and then Trainer put them up to Prelim for me. Which… it just shows how much she’s been messing with me all along with jump height when I was like “Are you sure these are Prelim? They look small.”. So she jacked one of the oxers up bigger and I shut up.

It was a really freaking hot and humid day (come back, fall, I miss you) so we didn’t do much, just a couple courses, but it was exactly what we needed. We had a couple of mistakes which I got to fix, heard those ever-constant and ever-necessary reminders to sit up and rebalance and get the inside hind under him (has anyone ever actually counted the number of times that your trainer has had to repeat the same instructions over and over throughout the years? It has to be a massive number by now for me…), and it felt productive. I know that we’re capable of this, I just have to believe it when I step in the ring. I’m feeling better about it though.

Trainer also gave us the green light to enter the full Prelim HT at the Pine Hill show in December. It’s the best possible scenario, since it’s a schooling show (low key) but they use the same course as their recognized, plus I have enough credits from volunteering to more than cover all the fees. Free horse show = less pressure. If the weather is crap or something goes awry, we can always change to a CT instead. 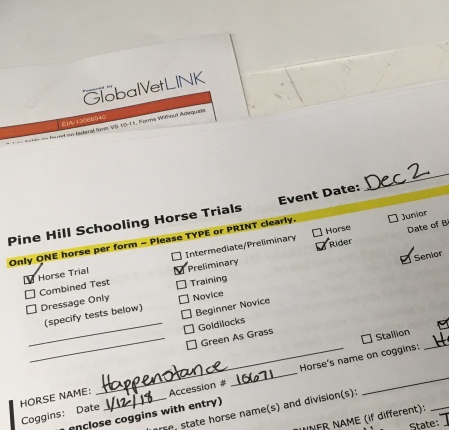 It felt especially momentous that after I dropped the entry in the mail, I was looking at my facebook memories and saw that 4 years ago today I entered Henry’s first event (and what was, at that time, my first event in over a decade) at Beginner Novice. I never in a million years would have imagined that the journey would take us here. It still feels hard to believe. I will never know how I lucked into finding such a cool horse, he’s expanded the limits of what I ever thought was possible. 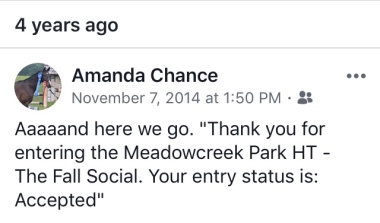 But for now, we focus on Texas Rose this weekend and getting the job done!