As some of you may know, fellow blogger and barnmate Hillary lost her lovely TB mare Annie (Little Orphan Annex) at the end of last year. Losing a horse is never easy, and it’s especially heartbreaking to lose one so young and full of promise. Annie was an OTTB, a chestnut mare, and while she could be spicy, she was also a fantastic athlete, forgiving partner, and beloved friend. 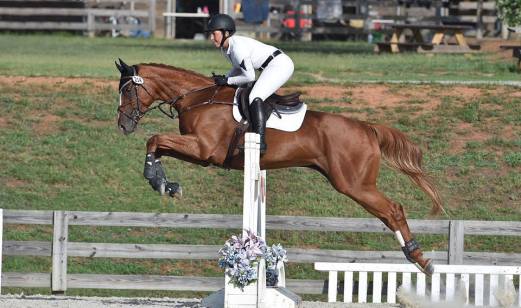 To honor the bond that Hillary and Annie had, and to commemorate the impact that this special horse had on so many of us, Beka and I thought it would be a great idea to sponsor a special award at this year’s Retired Racehorse Project makeover show. This award would be called the Little Orphan Annex Memorial Award, and it would be a cash prize given to the highest scoring chestnut mare of the competition.

After speaking with the folks at RRP, they are totally on board with our idea and this is something that we can absolutely do! However, the minimum amount required to secure sponsorship for a special award is $1500. While that’s a bit steep for just a few of us to come up with, I know that there are a lot of Hillary, Annie, thoroughbred, and mare fans out there that might be interested in pitching in towards this award as well.

The award sponsorship INCLUDES advertising across several different platforms, including social media and print, so it would be publicized in several places between now and October. For those of you who may not be familiar with RRP, here are a few important tidbits from their website:

RRP exists to facilitate placement of Thoroughbred ex-racehorses in second careers by increasing demand for them in equestrian sports and serving the farms, trainers, and organizations that transition them.

Since it’s 2010 founding RRP has inspired thousands to choose an OTTB. Thanks to 135,000 Facebook fans, 94,000 website hits, constant press coverage, and sell out crowds at horse expos, the popularity and value of OTTBs are on the rise.

We felt that RRP was the perfect program to support in Annie’s memory, given her and Hillary’s background. And just like RRP aims to increase the demand for the thoroughbred as a sport horse (something they have definitely succeeded in doing!), we are hoping that this particular award will incentivize Makeover participants to seek out and buy chestnut mares. Often times they get a bad rap, and being a “chestnut mare” can carry a lot of unfair and unwarranted stigma in our industry, especially if they’re a thoroughbred.

Our RRP liason tells me that many participants DO specifically make buying decisions based on special awards, so it’s a realistic secondary perk of doing this. At the very least, we hope that this will offer a little extra thank you to a makeover trainer that decided to give another special chestnut mare a chance to prove herself, just like Annie did.

Because I knew that we would have to go “public” with this to make the minimum sponsorship dollar amount, I’ve already told Hillary of our idea. There were a lot of tears, and she was really moved by what she said was “an absolutely perfect way to honor Annie”. Hillary is aiming to attend the Makeover show this year, so we’re hoping she will be there in person to see this award given out.

If you want to leave your name along with your contribution, I will make sure that it gets included in a card that we can give to Hillary when the award is officially paid for. If you’d rather donate anonymously, that’s totally fine too. Any amount that you’re able to contribute is greatly appreciated – every dollar counts. If we are lucky enough to exceed the minimum $1500 goal, all extra funds will be put toward RPP!

Thank you for being a part of what I hope is something really special!