One of my big goals this year is to seek out as many educational opportunities as possible, in whatever form they may be. Mounted, unmounted, formal, informal, riding-related, breeding-related, horsemanship-related… whatever. I just want to focus on learning. Riding in clinics isn’t really my favorite, mostly because I don’t feel like they have the most return on investment given the limited amount of dollars in my budget, but I do really like auditing. So when I heard about a Phillip Dutton clinic happening up in Dallas, and that auditing was free, I was 100% all in. It didn’t take much convincing (read: none) to convince Hillary to come too.

The weekend was cold as hell, but I did the best I could to take video and notes with my very frozen fingers. Phillip had some really cool exercises, a few that I definitely want to set up at home, but I was glad that I was auditing instead of spending a lot of money riding. I am one of those people that likes things explained to me in detail – I really want to know the WHY behind everything – and Phillip was not particularly verbose. Mostly it seemed like he let the exercises do the talking, which they definitely did. I still got some useful notes though – a few direct quotes and a lot of just general observations.

Saturday was showjumping day. He started off by warming everyone up together in a small space, about the size of a dressage court, and really focused on getting the horse accepting the leg. The did a lot of lateral work at all 3 gaits, and then focusing on getting the horse sharp off the aids by doing a lot of collecting and then lengthening in all 3 gaits. He said several times “prepare for every turn” – which ended up being a common theme for him throughout the weekend. He challenged the riders to see how short they could get the trot, and then how much they could lengthen, and then back again. Eventually he added in small circles in the corners, to increase the balance and get the horses thinking. He wanted them accepting of the aids, in front of the leg, and adjustable. 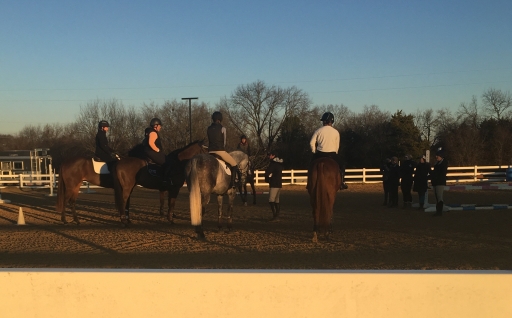 For the jumping, a lot of the exercises involved offset and/or angled fences. There was an offset two stride line of oxers, a skinny with one stride to angled oxer (or the other way, angled oxer to skinny), a corner that got added into the mix, a single oxer on the short side, and a two stride line. They started off cantering single oxers in the middle just one at a time, going straight. Phillip asked them to vary their approach and their distance – first asking them to jump out of an open stride and slightly longer distance, and then asking them to shorten the stride up and jump from a deep distance. He emphasized that it was important to practice different distances and different paces in your training, so that you can produce whichever you want, whenever you want, and the horse knows how to jump out of any of them. He told the riders that if they weren’t sure of the distance, to just sit and squeeze and wait.

When they first added in the skinny, one of the riders tried to walk over to it to let her green horse get a look at it first, and Phillip admonished her for that. He said that our horses have to learn to trust you and that their job is to jump anything we point them at, no questions asked. He said that if we think a horse may be unsure about a question, start small and break down the individual parts of the exercise, then put it together in a way that will educate the horse. But they don’t just get to walk up and get a look at “scary” fences before we ask them to jump. (This is something that I’m a firm believer in, so it was cool to see Phillip saying it too)

Cross country day started off with more, different, exercises in the arena, before venturing out to a little bit of XC. Again he spent some time on the flatwork, especially making sure that the horses were thinking forward and moving sharply off the leg. They practiced lengthening for 6 strides, shortening for 6 strides, turning small circles, lengthening quickly again, shortening quickly, etc. If some of the horses were a bit slow in their responses, Phillip encouraged the riders to put the pressure on their horses now, on the flat, so that it didn’t come back to bite them once they got to the jumping. Quick and clear corrections = good training.

In the arena he had set up an exercise that I’ve seen him use a lot in clinics now, a line of jumps that looks like this: 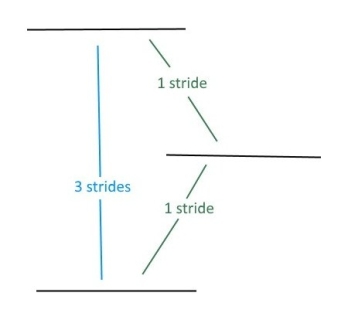 To start, they rode the first jump and 3rd jump as a 3 stride line, then they rode the first and second jump as an offset line, then he had them come back through and jump all 3. He didn’t explain this exercise beforehand, or offer any kind of guidance on how to ride it. He just kinda… threw everyone in and let them figure it out. The people who went later in the group had the benefit of learning a little bit from the mistakes of the people before them, but still, this exercise was a challenge to every group in the beginning. Eventually everyone figured out that what he was going for here was a) getting the horses sharp and paying attention and looking for whats next, b) getting the riders thinking FORWARD and using an opening guiding rein to move the horse, rather than pulling back on the rein or riding tentatively. Zig-zagging through jumps like this naturally makes you want to slow down and pick your way through, but it NEVER worked out if it was ridden that way. You had to keep the forward, and you had to look for the next jump with your eye, and open your hand in the air to guide the horse’s focus to the next one.

Once everyone got that exercise, he had them really gallop boldly at a triple bar on the other side of the arena, then come through the triple again. On both days he was VERY adamant about making good turns, both before and after the jump. If you landed from a jump and let your horse drift in, or just rode like a sack of potatoes to the corner, you would get a lecture about bad horsemanship. The turns are crucial to the balance, and he did not like even a single bad turn. He was also adamant that if a horse ran out, you must immediately correct them by turning the opposite direction. If your horse ran out to the left and then you immediately turned him back around left, you could go ahead and brace yourself for a megaphone “bad horsemanship” zinger. 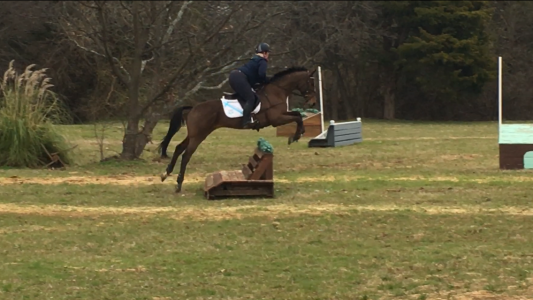 After the warmup in the arena, they went out to the small XC field. Again he had exercises involving a lot of narrows or offset jumps. There were a lot of struggles here throughout the different group levels, and some of the greener horses were maybe a little bit “mind-blown” by some of the exercises at first. Phillip’s big thing was that the riders should always be looking to the NEXT jump, planning ahead and getting the pace they needed. His narrow/offset exercises really forced the horses to pay attention, and they forced the riders to make faster and better reactions. He stressed several times that good XC riding isn’t about being right all the time, it’s about having the ability to quickly react. Several of his exercises demanded a conservative ride in, but then a very positive and forward ride out, otherwise it just wouldn’t work. The use of the opening/guiding rein carried over here, too.

He also spent most of the day telling people to lengthen their reins and get their bodies back. He said “When in doubt, stay back and let the horse have his head and neck to balance. You hardly ever see anyone fall off backwards.”. He still wanted the riders to take care not to hang on the horses mouths though, or catch them in the air/on landing. He encouraged grabbing mane or neck strap if necessary.

The biggest takeaways for me were that he made the riders a bit bolder, thinking more forward. He was forgiving of mistakes as long as you dug in, made an effort, and reacted intelligently. Pretty much everyone finished the clinic riding more forward and more determined than they had, and the horses were generally more rideable. For me a lot of what he said was directly applicable to where I’m at right now, so it was a weekend well-spent just to get these reminders and get a few ideas for new exercises that I can set up at home.