I am one of those weird, ultra-pathetic people who can be gone for 3 days and just really misses their horses the whole time. I’m used to seeing my knuckleheads every day, and they are what my world revolves around, so even just a few days has me missing my two favorite goobers.

Since we got home from Ocala so late/early, I just worked a half day on Friday. Enough to clean up my inbox, put out some fires, and then slip away quietly before I got drawn into anyone’s problem. From there, of course, I went straight to the barn.

Henry’s new bit had arrived while I was gone, so the first order of business was putting that fancy thing on his dressage bridle. See… here’s the thing with Henry. When you change anything, any piece of his equipment, his initial reaction is hatred and extreme overexaggeration. You have to give everything two rides before you make an assessment, and when it comes to bits, you better not actually be trying to get anything accomplished in those first two rides. He will chomp incessantly for the first ride, and then in the second ride he’ll either be extremely worse or slightly better. By the 3rd ride he either likes it or he’s belligerent. He is high drama. Like honestly, y’all should have seen the meltdown he had over a Happy Mouth once. It took me two weeks back in his regular bit to get him right again.

So for his first day in his Neue Schule, I just planned on a long ponying walk hack. No contact, just let him carry it and get used to the feel. As expected, he chomped and chomped and chomped the entire time. I think even Presto was like “Bro. Stop. Dat is annoying.”.

Aside from the chomping, both of them were spooking snorting idiots for our hack, especially Presto. Which is pretty out of character for him, usually he’s definitely the quieter horse of the two. I could tell he was just WILD, especially when at one point he was passaging beside us and snorting at bushes. So when we got back, I turned him out in the arena while I went to put Henry away, and all I could see out of the barn door was flashes of Presto, running endless laps of the arena at warp speed. Couldn’t do this in your pasture on your own time?

In his defense, it had been a week since I got him out and did anything with him, so I think he’d just gotten bored as hell. I appreciated that he was as polite as he was for our hack, considering how many pent up loonies he had lurking under the surface.

On Saturday and Sunday morning I was watching the Saint-Lô stallion show on ClipMyHorse, live streaming from France. It’s a rare treat to have a whole weekend with no firm plans, so I took full advantage by watching as much from Saint-Lô as I could. We were originally hoping to make it to Saint-Lô this year to attend the stallion show in person, but then the Burghley idea came about and that seemed like a more-bang-for-our-buck trip for the year. Some day, Saint-Lô… someday. A couple new stallions caught my eye, and I liked seeing event sires Upsilon, Jaguar Mail, and Grafenstolz.

The highlight of the show for me, of course, was a familiar face. Mighty Magic is looking good at 16 years old, and I am seeing so much of him in Presto. 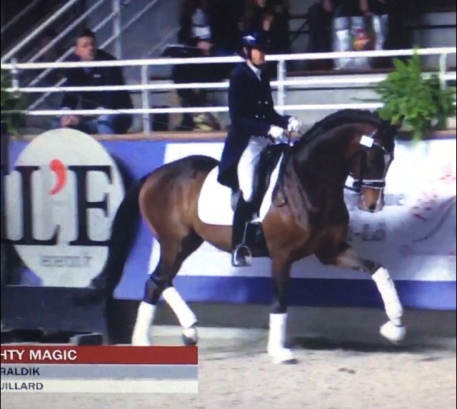 The weather this weekend could not have been any better, with highs near 70 and bright blue skies. We made more progress with Henry’s new bit (I think we have a verdict, but I’ll talk about that more when I post about the bit itself), and on Sunday I set up a faux ditch in the arena to send Presto over.

First he snorted at it a lot, then he literally tried to kill it by stomping it with his front feet. After a couple times over he was just stepping across, so I was like “I wonder what he would think of those barrels over there” and sent him at those. It’s so funny how quickly he’s understood the idea of sending over obstacles, just from that one day where I lunged him over those boxes out in the field. Now you just kind of point to it and he goes. They should have horse agility classes, he’d be good at it. Okay that’s a lie, he would be really slow. I’m pretty sure he finds the game to be fun though, and he just trotted right up to the barrels and plopped over, super unimpressed.

This week I’ll be glad to get back in our routine, and start getting myself prepared for the busy spring ahead. It’s almost March, guys… this year is already flying!

8 thoughts on “Back Where I Belong”