Tuesday was opening day for FEH Championships! I have not sent in my entry yet, because I’m not really that into tempting fate, but I did notice there are a lot of changes this year compared to last. Have I ever mentioned how convenient it is that they got a Central championship the exact same year that I had a horse at the right age to start participating in FEH? We’ll pretend that was on purpose. Thanks everyone.

Last year the show was at Texas Rose, a really nice venue, but a bit far from me at 4 hours each way. Granted, this is Texas… everything is far. We drove up the day before and stayed overnight. But this year the show is being held at Haras Hacienda, the Real Fancy place where Presto did his qualifier. It cuts my drive in half, since Haras is only 2 hours each way. That technically makes it possible to just haul in for the day, rather than have to come the day before and stay overnight. Which is a good thing, since prices went up this year.

USEA cut some of their FEH funding this year, so the increased fees are not a surprise. Entry fee plus starter fees for central Championships are now $210 for yearlings and 2yo’s, $285 for 3yo’s, and $310 for 4yo’s. As much or more than a regular horse trial entry fee. My last Prelim entry was $280, for example. The costs associated with running the FEH Championship are crazy, and the number of competitors isn’t high enough to cover it, so I completely understand the increase in fees. I do wonder if it will deter people from participating in the program altogether, though. There’s no easy solution to that one. It’s tough to get sponsorship for stuff like this in America, where we’d rather go import horses than buy (and promote) what’s being bred and raised here.

By hauling in for the day and working out of the trailer, I’d only have to pay a $30 grounds fee as opposed to a $65 day stall or $85 overnight stall plus $25 muck fee. It will make for an early morning and long day for both of us, but we’ve done it before. It’s also on a Thursday which is kind of a bummer because it means a day off of work. Between the entry fee and the grounds fee plus a $35 health certificate and the $50 handler fee (um, yes, you can bet your sweet ass I’m hiring Martin again, best decision ever) it’s shaping up to be an expensive 5 minute in-hand class. Especially for a horse that isn’t for sale or destined to be a FEH superstar. But, hey… he’s only 2 once, right?

Presto is actually looking pretty good right now, despite being in yet another growth spurt. The barn owner has been trying real hard to get his ribs covered a bit more, and she’s done as good a job as I think is possible short of tubing lard directly into his stomach (… is that an option? Asking for a friend…). The fact that he’s in a not-that-ugly stage makes me nervous that he’s gonna go full blown Giramoollamapaloosa right before Championships, because he rarely stays looking good for long.

At this point now we just have to keep him in one piece and try to minimize the various scrapes and bumps that are neverending. He constantly looks like he lost a fight with a weedwhacker.

I also have to decide which browband to show him in – his green and navy Boy o Boy Bridleworks or his swoopy spiked punk rock one from Dark Jewel Designs. His bridle is kind of barely fitting him these days, especially in the crown area, and he’s already pushing the limits of the Boy o Boy browband (which is freaking HORSE SIZE, what the hell, Presto!). The top half of his head is huge, and it’s certainly not because he has a big brain. 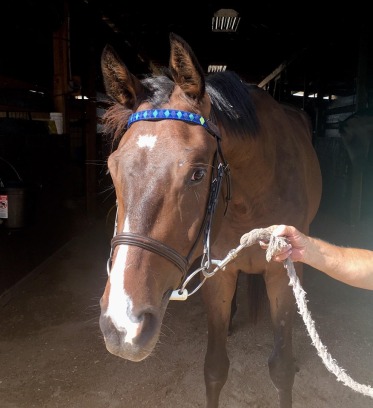 I also noticed after I snapped the browband pictures that in the month or two since I last put his bridle on him, he’s grown even more, and I need to lower everything a couple holes again. So uh, ignore that part. How is his head even still growing? It’s big enough.

Which browband should he wear for FEH champs? I’m on the fence.