Now that I’m home and de-jetlagged (it was brutal this time, geez) I’m able to reflect a little bit on the trip as a whole.

First of all, Burghley is incredible. I would 110% recommend it to anyone. The shopping was ridiculous (over 600 vendors???), the food was insane (we ate a lot of cheese), and the crowds were huge. I found the Brits to be extremely nice too – special shout out to Gadding About with Galahad, who I happened to meet on a train platform by pure happenstance, and who also showed us a much quicker shortcut to get into the grounds. Blogging, y’all… it goes worldwide. Getting to see iconic fences like the Cottesmore Leap and the Leaf Pit with my own two eyeballs was really fun, too. The jumps are massive, the terrain is intense, and it’s easy to see why Burghley is the biggest and baddest XC in the sport.

As to the controversy that’s been swirling around regarding all the falls and retirements, I’m a little bit on both sides of the fence. I did not like the gates combination and didn’t think it was fair or safe. Mark Phillips admitted as much himself in a press conference. I also didn’t like the big log oxer going downhill into the Trout Hatchery, I didn’t think it jumped well overall. But I will also say that I saw a lot of big rider mistakes, especially at the Maltings, and a lot of people that should have pulled up but kept going. Most of those falls you could see coming from several fences before. And despite all the problems the course was causing, surprisingly few selected to take the longer easier routes, even when it was clear that the horse was already feeling a bit overfaced. The riders who did it well did it really, really, really well. Smooth and textbook and easy, a total masterclass. The ones that didn’t… it was bad. Take out the trappy, unfair questions for sure. But at a point the rider has to take responsibility for the horse they’re sitting on and know when they need to take a long route, or when they need to put a hand up and call it a day. I did not see enough of that until it was already too late.

The other thing that wowed me about Burghley was the turnout for the Young Horse finals. I know I talked about it a bit on the day recap, but it’s something I haven’t stopped thinking about since. The whole culture over there is so much different regarding breeding and young horses, so many people are interested in it. Being part of the crowd there, which numbered in the thousands, and having been a part of the crowd here, which numbered less than 50… it makes you wonder how to get that same level of enthusiasm about young horses and breeding over here. Are we just such a culture of “if you want a nice horse, go import it” that we’ll never have that kind of interest here? I don’t know. It’s a little depressing. Although I did have a bit of a chuckle at the thought of us running our Championships in the same format, with the dressage arena marked in the grass in the ring, and you do your dressage test then go straight over to the jumps. I think some folks might have a fit. I remember doing a FEH clinic a few years ago where someone brought up how the judge rides the top 3 in England, and suggested trying something like that here… one of the ladies had an absolute STROKE at the mere thought of it, saying she wasn’t going to let anyone else sit on her horses under any circumstances. We’re a bit primadonna sometimes. Having to do your jump warmup, then a dressage test, then go straight to your stadium course… I bet there would be a lot of grumbling about that.

Setting Burghley aside, there were lots of other perks of the trip. I’ll be honest, I had been a bit worried about all the trains we had to take (that involved 4 different trainlines and many different stations) because I have historically been REALLY dumb about trains. No joke I’ve gotten lost in the Atlanta airport before because I took the train the wrong way. But somehow we managed to always get where we needed to be, never missing a train or ending up in the wrong place. Way more confident about the train systems in each country now, and next time I think we’ll modify our trip to include more trains and less driving.

I am also completely convinced that the only way to really see a country is to avoid the bigger cities. I’ve come to hate them, even Paris. Getting out in the more rural areas, away from the tourist traps and the constant bustle… that’s my favorite thing. Driving through the French countryside was just so lovely, a thousand times better than anything the city has to offer. You can see the real soul of a place. The same was true in England, I don’t think there is a town in the world that is cuter than Stamford. And have you even FRANCED until you’ve stood in a pasture full of mares and foals in Normandy, fields stretching out in every direction as far as the eye can see? 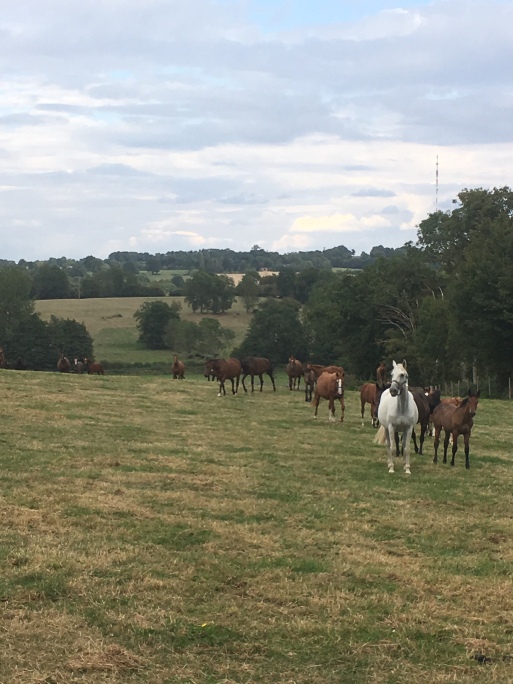 Although I will say, the French are interesting people. The culture is a lot different from America, especially with regards to lunch time. Like… everything just STOPS at noon and doesn’t start again until 2. Businesses close. Don’t ask to meet anyone anywhere during that time unless it’s for lunch. And if you walk into a restaurant one minute after 2, they won’t be serving anymore, you’re just kind of SOL. This is how we found ourselves at a French McDonald’s, having been a bit late for lunch time and unable to find anything else that was still open. But bonus – you can order at the kiosk and change the language to English, which was a bit of a relief after a couple days of having to use the Google Translate app on every menu. Unsurprisingly, French McDonalds was way better than American McDonalds.

Speaking of which, if you find yourself in a restaurant that offers an english menu, totally get it. It will be entertaining AF. We laughed particularly hard at this dessert section at a restaurant in Deauville.

People have been asking me how we got to meet a lot of these stallions and visit these big farms. There’s not much science to it: just ask. I’ve found that, usually anyway, people are quite generous with their time, and were super kind to us, showing us their horses and talking to us about them in depth. Even if there’s a bit of a language barrier, we all speak horse. You can learn so much just from looking at other people’s horses, and listening to what they have to say. And especially when it comes to breeding, there’s nothing quite like seeing these horses in person. Some really wowed me that I didn’t expect. Others I liked less than I would have thought. Either way, we come away from every trip having learned something and having made at least a couple new friends.

And of course, seeing Mighty Magic in person was just BONKERS, I knew from pictures that Presto took a lot after him, but good lord. Now instead of asking him “WHY ARE YOU LIKE THIS” I just look at him and go “I KNOW WHY YOU’RE LIKE THIS”. I keep showing his video to everyone that knows Presto and the reaction is always “oh my god they’re identical, same mannerisms and everything, how crazy is that???”. I’m now totally convinced there’s a gene for mouthiness. Presto is never getting nice reins. Have to admit though, I really loved MM’s total ham personality. Cheeky bastards are my thing.

I think this might have been our best Europe trip yet. We got to do so much, even if it did seem like the trip just flew by. Every day was busy busy busy. I can’t wait to go back and do it again. Maybe Ireland next time?

Michelle is still uploading all the pictures, I’ll post links to the albums once everything is up! If there’s anything I didn’t cover or anything you want to see, just ask.