Normal people equate autumn with things like pumpkin spice lattes, changing leaves, making soup, and arguing on the internet about whether or not candy corn is disgusting (it’s literally a chunk of sugar so it’s delicious by default, but if y’all don’t want to eat it that’s fine, more for me). To equestrians autumn mostly means fresh horses, lots of shows, and… body clipping.

Back in the days when I was more desperate for money (or, really, before I branched out into other side gigs, because as a horse owner I’ll probably always be desperate for money) I used to do a lot of body clipping. It can be pretty lucrative if you’re willing to do it and can do a decent job, although year after year my willingness has definitely lessened. I’m relatively certain that I will have horse hair in my eyeballs forever after a few particularly busy winters in my heyday. Nowadays pretty much the only way I’ll body clip is if it’s my own horse or a friend’s horse.

Henry, bless his extremely hairy and also heat-intolerant heart, feels the same way about clipping as I do. He permits it because he has to and he enjoys the results, but he really isn’t much of a fan. He stands politely for the most part, but he’s so flinchy and sensitive that I get whipped in the face with his tail pretty much the whole time I’m doing his belly.

I’ve bodyclipped Henry so many times over the years that we’ve come to a few agreements by now:

I have a set of Lister Star clippers, which are more powerful and faster, but they also have more vibration and are louder, and Henry doesn’t really like them on his midsection. And when I say he doesn’t really like them I mean he acts like he’s being murdered one inch at a time. So unless I’m in a hurry for some reason, I just clip him with my smaller Andis clippers. They’re still pretty powerful but he takes less objection to them on his sensitive areas (let’s be real, he’s a walking sensitive area).

Normally he gets his first clip around the beginning of October, but I waited a little later this year since we aren’t showing and he’s really just coming back into a regular, more rigorous schedule. I was hoping if I waited a little later I wouldn’t have to clip him so many times. I think that was a mistake though, he was hot even in the 70’s weather we had this weekend. His coat is so thick, and he already has problems with heat regulation. I won’t do that again.

But yesterday we got down to it… I bathed him (wow he was FILTHY, he lives in a much sandier place now and I think he’s taking full advantage), got all my stuff ready, and went to town. Usually I use T-84 blades but this time I opted to go a bit shorter with T-10’s (thanks for that 30% coupon, Dover, well timed), hoping it’ll maybe last a bit longer before we have to do this again. I found a gross mega-flaky skin patch under all the hair on one side of his butt, too, which again made me feel like a bad horse mom. So he got a fungus bath when we finished and then I turned him back out. He didn’t even pause for a cookie, he just stalked away angrily to the back of the pasture. Two baths and a body clip in one day… I guess he hates me now. 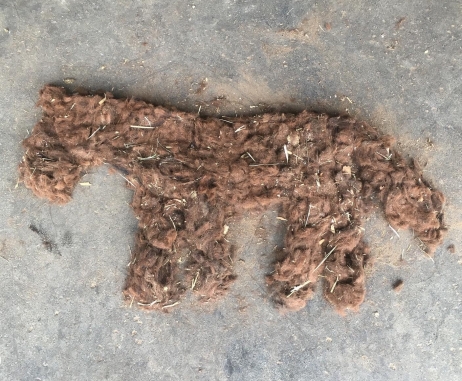 I cleaned up and packed my things away, pausing to make a little mini-Henny in the process (look, I’m a child and it’s the only real fun I get to have in all this, okay?) and he still refused to even look at me. YOU’RE WELCOME, HORSE. I know he has to feel a lot better, and it’s supposed to be almost 90 tomorrow so he’d have been legit dying otherwise. But, ya know… I’ll just plow him with cookies until he’s over it, like always.

Anybody else body clipping already? Nothing quite like a bra full of tiny stabby horse hairs to officially ring in the fall season.

17 thoughts on “The making of Mini-Henny”