I’m not doing much with Presto at the moment. He’s officially 2.5 (ok to be precise he’s 2 years, 7 months, and 6 days, but WHO’S COUNTING?) and I’m pretty sure the closer he gets to 3, the slower time actually goes. In the grand scheme of things 3 is super young and babyish, sure, but when you consider that this horse has been “in planning” since 2014, it feels like a really long time to get to a point where they’re almost a real horse. We’re at that “so close, yet so far” stage right now.

Luckily he is super chill and retains everything well, so I don’t have to do much with him. His transition over to his new living arrangement went pretty seamlessly, and he seems very content. I bring him in one day a week to make sure he hasn’t gone feral, but otherwise he just hangs out and eats and plays with his friends. He has taken the perfectly middle position in his herd, below the iron rule of the older mare, but ahead of the yearling. None of them cares when another one leaves, so there are no herdbound issues, which is what I was most afraid of. It’s almost like having a younger horse in the dynamic has made Presto mature a little bit. Which, btw, the poor yearling somehow managed to get himself skunked last week. What are the odds that a skunk could be anywhere near Presto and he actually manage to NOT be part of it? I know, I’m also shocked. 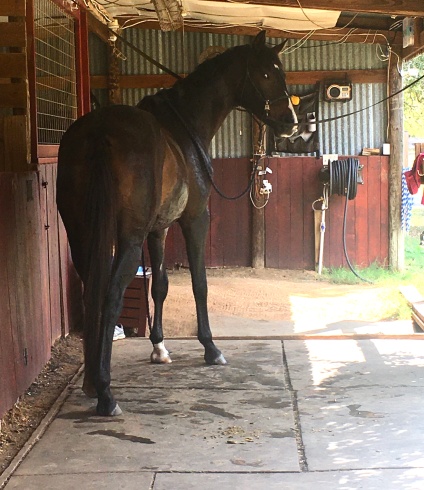 Still though, despite missing the actual skunking, he was filthy and disgusting. And it was 90 degrees on Sunday. So I made an evil plan to roll a couple different things into our once-a-week activity day: ponying and a bath.

First, the ponying. This is where things are getting just a bit freaking ridiculous. Thank goodness I taught him to pony when he was still small, because…

at this point who’s ponying who anymore? It’s almost comical. It’s like I’ve got a damn brontosaurus on a leash. Poor Henry with his average height and low set neck.

I haven’t sticked Presto in months, therefore, by my supreme logic, he’s still the same size he was the last time I sticked him. New plan: never stick him again. Really though, I don’t think he’s added much more height lately, but he is definitely filling out. I switched both boys over to Bluebonnet Omega Force when we moved, and while I think it’s too soon to say for sure, I’m liking how they look on it so far. Of course, Presto is also eyeballs deep in a round bale pretty much 24/7, which helps.

Anyway, the ponying was pretty uneventful. It’s to the point though now where Henry struggles to keep up with him at the walk, and Presto constantly has to check himself or shorten his stride. His legs are longer and his walk is naturally bigger and more swinging. But we took him around the entire property, up and down the little hills and across the natural ditch, and he took it all in stride.

The bath though… that pissed him off. I don’t really understand why he hates baths so much, because he LOVES water. He likes to stomp in it, stand in it, roll in it. He even likes to stand in the rain. Why is a bath so different? BUT, jokes on him, because I finally have a real washrack at my disposal. Every barn I’ve kept him at before now has just had a hosing area, not an actual washrack, so bathing him has been annoying AF. But this time, much to his chagrin, he had very little choice but to stand still and accept his fate.

So stand he did, and scrub I did, and let the record show that he was clean for at least an hour. I even made him stand in the barn crossties under the fan until he dried, because I’m extra mean and horrible.

His missing chunk of heel continues to give him no problem, knock on wood, and is already growing out some. He’s had his feet trimmed twice since The Incident and the farrier is happy with how it’s looking. Hopefully the heel continues to grows back in normally and we don’t have any cracking. We shall see. Until then I’ll be over here trying to resist making a countdown clock for his 3rd birthday.

7 thoughts on “Brontosaurus on a Leash”