Last winter I had the sneaking suspicion that by this winter Presto would be wearing Henry-size blankets. Instead of buying all new blankets for Presto, I decided to pass Henry’s old ones along to Presto and buy Henry all new ones. He is the goodest boy, he deserved new blankets. Plus it finally gave me a good excuse to get Henry out of those ugly 3 year old teal HUG’s and into some pretty new navy ones. So Presto got a 72 last year to hold him over (which he wore… twice…) and Henry got new 78’s in navy. The old teal 78’s were washed and stored for Presto to wear this year.

I have a major obsession with these HUG blankets, and they’re getting harder and harder to find. But they’re the only ones I’ve ever found that don’t rub Henry, and I like how much shoulder freedom the horses have in them. I’m convinced it has to be more comfortable when they’re walking or running around. Considering how many horses I see during the winter with shoulder rubs, I’ve never understood why the HUGs aren’t more popular. I have five of them now. Shoot, I even considered buying the fly sheet even though horses can’t really wear fly sheets here in the devil’s armpit. Anyway, moral of this part of the story: I love my HUGs. I am a devotee.

It’s supposed to get down near freezing for the next couple nights, so last weekend when I had Presto up in the main barn I tried Henry’s sheet on him for size. Yup, as suspected, 78 it is. I went to my blanket bin in the garage, pulled out the stored teal 78 sheet, and took it to the barn. I brought Presto up to his shed so I could put it on him and get all the straps adjusted to fit him before he actually had to wear it for real. And that’s when I realized that this poor, precious, hideously teal HUG has basically a 0% chance of surviving the week, much less the winter. Why? Let me show you why.

They just could not keep the damn thing out of their mouths the entire time I was trying to adjust it. At one point I had to tug-o-war a surcingle strap away from Presto, only to look up and find JB pulling on a leg strap on the other side. Omg. Baby horses are the worst.

I’m gonna be really mad when they both destroy their (or each others?) blankets. This is why they can’t have nice things. Unappreciative little turds. And destroying one of my beloved HUGs, no less. I’m mad at them in advance. Because let’s be real, it’s not a matter of “if”, it’s a matter of “when”. 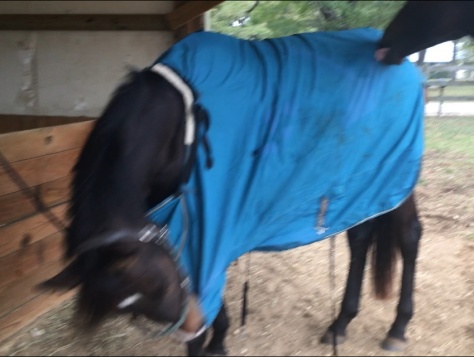 What Presto doesn’t know is that when he destroys this one, he’s going back in his 72 from last year. He can just have a cold butt hanging out the back. That’s what he’ll deserve.

I feel like we should have some kind of death pool for the poor HUG sheet so it can go out with a bang. How long do you think it’ll last? How exactly will it die? Which baby idiot will kill it?

Stay tuned to find out…

25 thoughts on “Riches to Rags”