Henry would like to remind everyone that this is his damn blog, as evidenced by the frickin title and the giant banner photo across the top (that the kid already tried to worm his way into). Not cool, bro. Not cool at all.

He went to a show on Saturday and didn’t even get the Monday blog spot, which he finds incredibly offensive. I tried to explain the whole “landmark moments” thing to him with regards to Presto’s first ride but I don’t think he cares. Scratch that, he definitely doesn’t care.

Anyway, yes, Henry did go to a show on Saturday, another one of the small little schooling shows nearby. It’s 25 minutes gate to gate and under $50, which is hard to resist. Nothing has ever been that close to me. Ever. These schooling shows are super laid back and chill, so it’s really just an opportunity to get off the property and go jump a couple courses somewhere else. 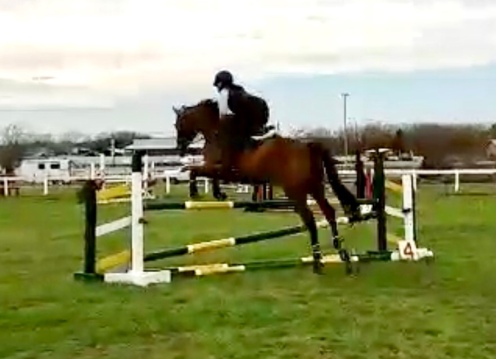 Lately no one else has really entered anything above 2’6″, so it turns into more of a schooling than an actual show for me, which is totally fine. I’m not there to really show anyway, just to jump around outside of our home environment. The organizer Paulina is super nice and flexible, so once the smaller classes were done she put all the jumps up for me and I jumped my two rounds before she put everything back down for the people that wanted to school after the show was over. It’s like all the perks of a show but none of that whole stand-at-the-gate-forever-and-wait-for-everyone-to-go thing that I can’t stand. Plus if I didn’t like how I rode something, I can just go back and do it again.

Paulina even videoed one of the rounds for me, too, since she knows the importance of blog media (thank you!).

The ground was still a little bit slick from rain earlier in the week, so we kept things on the smaller side and I opted to ride to the quieter deeper distances. He’s not drilled and tapped at the moment, so no studs. He was very chill and rideable, and agreeable to my ideas (not always the case with him, because he’s a diva). After I warmed up I felt like I had a little too much whoa, so I asked Paulina to loosen my hackamore. This facility is getting pretty familiar to him by now, I have pretty much the same horse there as I do at home. I don’t need a lot of brakes.

I want to start taking Presto to these shows, since they’re so close and easy and cheap. They have one pretty much every month except during the summer. I briefly entertained the idea of taking them both, but I don’t think I hate myself enough to do that alone. Henry has a way of stirring Presto up, as I’ve learned. 99.9% sure it’s on purpose, too.

Presto has been to a couple there before already, when he was a yearling, and I think they’d be good experience for him to continue doing now, especially once he’s broke enough to start riding around. Plenty to look at, but not super busy or overwhelming. It’s a nice first step before thrusting him into the hubbub of a bustling recognized event with hundreds of horses. Plus their classes start at literally poles on the ground and go up from there, so it’s great for green ones, and there’s a little xc course on site with ditches, banks, and water. It’s got Presto written all over it.

It’s pretty much that time again – horse show season is upon us. Anyone else got shows on the horizon?

6 thoughts on “Who’s blog is this anyway?”