I dunno about y’all but if I have to watch one more White House coronavirus press conference, I might stab my own eyes out with a quarantini pick. Thank goodness the apocolypse came during foaling season, because you know what the world needs now? BABY HORSES. And you know who really delivered? PEYTON. Say hello to Remington WTW. 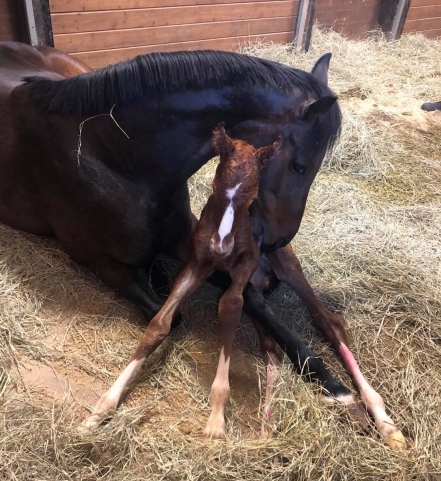 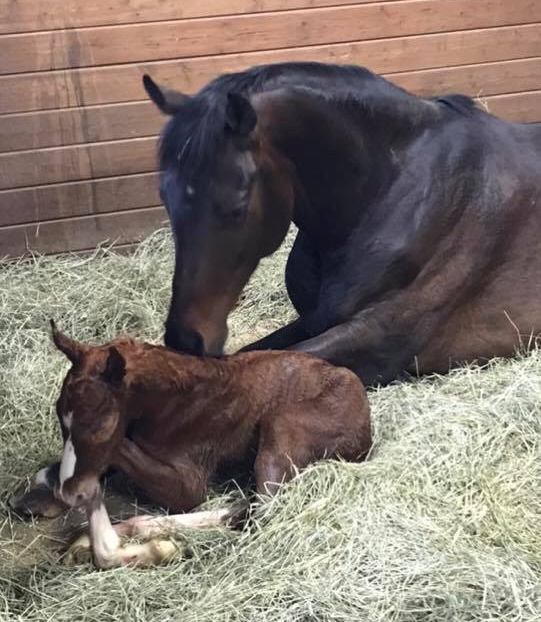 If you’re anything like me, your first thought is OMG ADORABLE. And then a split second later you’re like “Wait, holy hell, how did that come out of two relatively plain bays???”.

I have to admit, when Michelle first sent me a picture I was like why is she sending me old pics of Liam? And then I was like wait no that’s Peyton. WHAT?? It’s possible that I asked her if she was sure she put the Ramiro B semen in and not Emerald (she didn’t, no Emerald LOL). To look for an explanation Michelle went back to Peyton’s genetic profile and found that she does indeed possess a W20 gene, which when passed (it’s 50/50 when they have one copy of the gene like Peyton does) works to boost white markings.

We also know that bay/brown/black tends to inhibit the expression of white a bit… markings are generally more expressive on chestnuts. Getting a chestnut foal wasn’t totally unexpected – we knew that both Peyton and Ramiro B had a red gene, so although odds were definitely higher for bay (75%), chestnut was entirely possible (25%). Bay is always dominant, so both parents had to pass their red gene in order for the foal to be chestnut.

Now, back to the white. If you want to talk about KIT genes and dominant white and W20 we could be here all day, but basically what happened was this: Peyton’s W20 gene took a little bit of white and dialed it up. What otherwise might have been a chestnut with a couple little socks and a stripe or something, put W20 on it, and now *bam* you get Remi. The odds were low, for sure. Only 25% chance of chestnut, and then 50/50 on passing the W20. So… “what were the odds???”… 12.5%.

Where did Peyton get the gene? Likely from her sire. He’s bay, but has 3 little socks and blaze. If he was chestnut I bet he would have had a lot more white.

Genetics, man. They are wild.

I don’t know if anyone in the Baby Bets contest guessed this (I sure as shit wouldn’t have!) since I haven’t looked through to calculate points yet, but if you did – more freaking power to you and your psychic abilities. 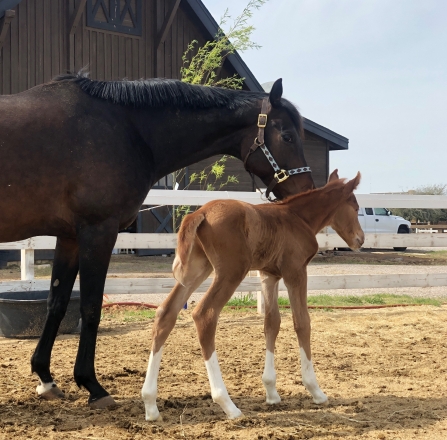 As for Remi, he’s pretty perfect. Peyton really knocked it out of the park for her first foal, and she’s being a great mom (if not perhaps a wee bit of a helicopter parent). He’s definitely got the substance of a Ramiro B, and he’s very correct. While already adorable, once he has a few more days to unfold he’ll be downright stunning. He’s going to be a nice rich chestnut, and could you ask for more perfectly symmetrical stockings? Whoever buys this one will definitely hit the jackpot.

Need a good distraction from the world right now? I offer you 2 minutes of adorableness via Remi.

And would you believe that the next mare is already over 320 days? We’re probably only 2-3 weeks away from having another foal, they’re pretty evenly spaced through May, thank goodness. It looks like we’re gonna need steady bouts of adorableness for a couple months. And the next one up is Daisy, the grulla, with the first Usandro foal to be born in the US. PONY FOAL. Stay tuned…

20 thoughts on “What the world needs now? Baby Horses.”