Since Ellie is the last WTW foal of 2020 I figured she could get this edition of Foal Friday all to herself before we get back to including all the babies. Plus I have like a bazillion pics of her from this first week, and it’s hard for me to pare them down because I am admittedly biased towards Presto’s little sister and her beautiful dam.

But first and foremost – the Baby Bets contest winner. This one was a nail-biter right up until the very end. Austen came out swinging, being the only person to guess Remi pretty accurately. That was impressive, because nobody else saw a chromey chestnut colt coming, that’s for sure. Getting the date right was what sealed the deal for her there with the early lead. But then Madelyn guessed Ollie pretty close to spot-on, tying things up. It all came down to Ellie, and even that didn’t break the tie because they both guessed bay filly. For the second year in a row Michelle had to pick a name from a hat, and the winner is Austen! We will start getting your prizes together and be in contact with you shortly. Thank you to everyone who participated, I always think it’s really fun to see who guesses what.

Ok, back to Ellie.

It took her a few days to really figure out those crazy long spider legs. As you can see she’s still in the process of unfolding, but she’s managing herself pretty well, getting more and more sure of her stilts by the day.

She’s brave and curious, not scared of things but always wanting to figure them out. That sounds pretty typical of Sadie and her foals. The first day she was turned out in the paddock with the poles Sadie took her over there to let her sniff it and take a look, then made slow deliberate circles over the pole with her, leading the way and showing her how it was done. I told Michelle she owes Sadie a bonus for her training services.

Every time I see Sadie with one of her foals I remember how awesome it is to have a mare that really “mothers” their foals like this, teaching them things calmly and clearly. She’s so intelligent and deliberate about it. Not all mares are like that. 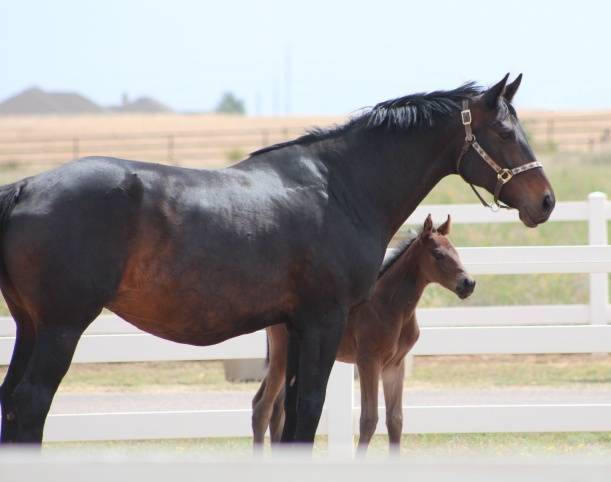 Both Sadie and Ellie have continued to do well over this first week. Those couple days around the birth might have worried us a bit, but luckily everything has been good. Ellie got plasma as a precaution, and while some foals are a bit backed off from humans after that (running a bag of plasma requires an IV catheter, time, and restraining the foal to keep them still while it runs, so it’s not particularly pleasant) it didn’t seem to phase Ellie at all. She was still just as friendly and kind afterwards as she was before. Sounds like someone else we all know. 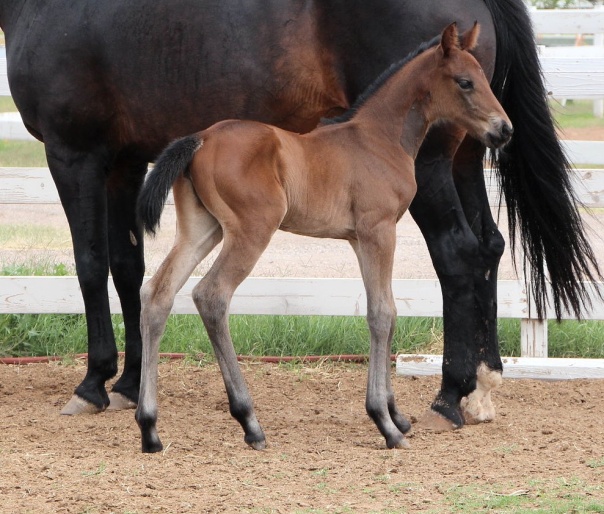 As she’s figured out her legs she’s gotten more and more playful, galloping around, leaping over the pole, and even managing some fairly impressive bucking.

It also looks like she has a registered name now too, although I’m not sure if the spelling/format has been finalized yet, it has been the center of much debate. It’ll either be O’Tembo or Otembo. Tembo is swahili for elephant and O’ kind of combines the english “of” with the swahili “elephant”. Otembo is a creek/wildlife area in the Congo right in the heart of African forest elephant territory. Although just for fun, go google translate “O tembo” from Swahili. Spaces and capitalization change the meaning, and it kind of had me rolling. But anyway, whichever one it ends up being, I think it’s a pretty word, and unique, and kind of makes for a good story. (Also this did lead to me googling the Swahili word for giraffe so I can use it on Presto)

It was a great foaling season for WTW and I’m excited to see how these four kids continue to grow and interact. For those who have asked, Ellie and Remi are sold (to the same person, so maybe we will get to see a continuation of their adventures over time!) but Oakley and Ollie are still available. You can message the WTW facebook page if you’re interested!