Ok, I’m not creative enough at the moment to write an ACTUAL proper lyrical ode for Quinnie, but she really deserves one.

First she spent most of the winter being Henry’s emotional support animal extraordinaire. She’s the only horse he’s truly gotten along with in years, and the first horse I’ve ever seen him genuinely LIKE. Usually his opinion on other horses lies somewhere between outright disdain and casual indifference. 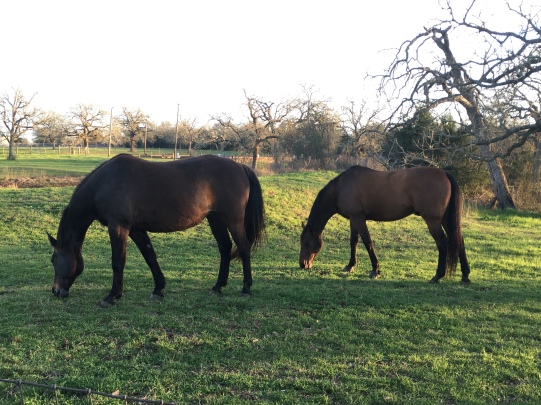 When the rest of the horses came back from Florida, the living/turnout situations shifted a little bit and Quinnie went to live out in the front pasture again with the two babies. I was a little worried that Henry might get his soul crushed, but they share a fenceline and I have caught them over there still grooming each other over the fence, so… they seem ok with the arrangement.

Now her title has shifted from Emotional Support Animal to Head Nun at the Reform School. The cool thing about Quinnie is that she’s just so damn smart. She’s older, she’s been around the block several times, she knows what she’s supposed to do, when, and how. She likes law and order on her farm, and she insists that those in her care adhere to the rules as well. So not only is she a good girl, she makes the other horses be good too. Which, as you can imagine, is especially important with Tweedle Dee and Tweedle Dum(b).

Quinnie has no tolerance for bullshit and poor behavior. Presto and JB are like the two kids on skateboards outside of a punk concert sporting fauxhawks from Supercuts and Anarchy t-shirts. Put them both together without any “adult supervision” and it’s just mass chaos and destruction and naughty ideas. It’s not a matter of if they’ll find trouble, it’s a matter of when and how much.

Under Quinnie’s rule they now all walk up, file into their appropriate spaces, and wait for their food. They stay in their own space and eat their own food until meal time is over, at which point they file back out. There is no stupidity and there is no carnage.

Well, except for the carnage she doles out herself when someone gets out of line. Presto is wearing his list of transgressions.

Before you feel too sorry for him, they’re all his own fault. He loves to push the limits and doesn’t know when to quit. Quinnie gives many warnings before she actually doles out any punishment, but Presto just doesn’t know how to take a hint. Sometimes he chooses to learn the hard way.

Having her back in the fray has really changed the dynamic in the babies in a much more mature direction. I mean, don’t get me wrong, there’s still yeehaw gallop laps and games of bitey face and she can’t be EVERYWHERE at once, but the shift is undeniable. When it’s just JB and Presto, Presto is the top dog, and that’s just never good. Now he’s solidly, undeniably, unequivocally occupying the second place position, which is a few lightyears below Quinnie’s #1 spot, right where he belongs.

Thank you Quinnie. Clearly you are the glue that keeps my two idiots’ brains together, just in very different roles. You deserve a raise, a bonus, and a paid vacation. And this is why I give her cookies every time I go out to her pasture… at this point I’m forever in her debt.

7 thoughts on “Ode to Quinnie”