I’ve had my Pivo for about 4 weeks now, and while I posted my initial thoughts back when I first used it, I’ve continued to get a lot of questions so I figured I’d do an update.

Short version: I’m still really happy with it. I’ve used it 6 times now and we’re 6 for 6 with success. Not only has it worked for all 6 rides, but it’s lost me a grand total of twice in all that time. Granted, I think the real key to my success is that I know how the software works and always keep that in mind when I’m riding.

There are a few things I’ve done differently though, since I’m still learning as we go.

First, I started filming with the front camera instead of the back/selfie camera. Originally I used the back camera because I wanted the screen to be facing me as I rode, so I could check it constantly because I was mega paranoid about whether or not it was working. Now that I know it better and trust it more, the front camera is a better choice since the video quality is better with that camera. I also edited my camera settings to capture better quality video (I’ve legit NEVER messed with my camera settings before and the defaults are not the best quality, I feel like a moron for never even thinking about that) so I have better quality screenshots. While I changed some of my phone’s camera settings, I haven’t changed or messed with any of my Pivo settings, since the ones I’m using (Horse, AI, Center, Frenzy, Predictive Follow off, Exposure On, Auto Zoom on) have been working well for me.

Second, I got a slightly taller tripod that has a level built into it, with a screw mount on top and a carry bag. Taller tripod because part of my issue with the framing on Presto was that the phone needed to be a little bit higher. I figured a built-in level was a good thing too (and it is, because I almost never set that thing up totally level on my initial attempt before I check the actual level). The Pivo also has a level too so it’s probably a bit redundant, but if my tripod and my Pivo both say they’re level, I’m convinced. The screw mount attaches to the bottom of the Pivo, which I just leave on the tripod with it’s cover over it. And the carry bag is so I can just sling it over my shoulder and carry it with me when I ride out. There are about a bajillion tripods to choose from on Amazon. Pick your poison. I try to set it so that the Pivo is around the height of where my knee will be, so on Henry that’s a little bit lower than it is with Presto. My setup now takes less than a minute. Pop out the legs on the tripod, check for leveling, turn on Pivo, open Pivo app, place phone in Pivo, check my settings, make sure the app is locked onto the horse, and hit record. 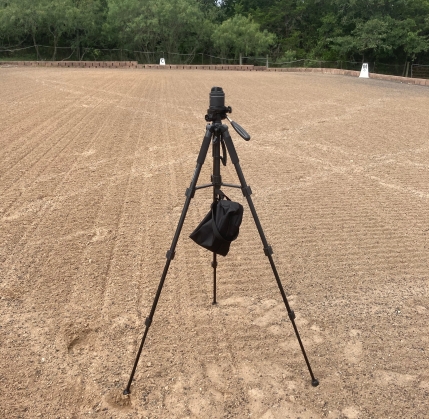 And lastly, I also bought a new phone case. Which… the timing kind of worked out because I broke my original one the day before my new one came. But I went from an Otterbox Defender type case (that fully encases the phone like armor) to an Otterbox Symmetry type case with a screen protector. Mostly because that big Defender case does NOT fit well into Pivo’s clamp. You can buy a separate mount from Pivo to accommodate this, but… I didn’t really want to. I’d rather just get a different case since I didn’t like that other case very much anyway. Technically I could shove that bigger case in, but it was a fight, and inevitably it ended up holding the phone at a bit of an angle because it just really didn’t fit. I ended up taking the phone in and out of the case to use it on the Pivo, and I thought that me taking it in and out of the case while at the barn was probably a lot more dangerous for the phone than just buying a slimmer case. 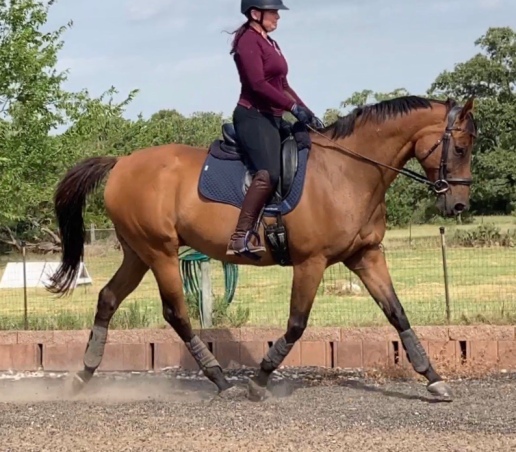 The only other thing I’ve done slightly different is that I haven’t been as paranoid about adding brightness/contrasting colors on the horse. The first couple times I used white boots/white pad to help the Pivo see the horse shape better, but it seems to not really even need that, at least not when the lighting is good. If it was overcast or I had shadows in the ring or my background was darker, I’d probably still err on the side of caution, but it seems to have no problem following either of my horses against our background even without any added contrast.

While I purchased the Pivo mostly for the sake of screenshots for social media and videos for Presto’s vlogs (which it’s delivered on, for sure) I think one of my favorite unexpected perks is the little random things it captures. Like when I said Presto likes to come up to the fence to watch me ride Henry… in the first clip you can see him start walking up when he’s sees me getting on, and in the second clip there he is in the background, totally judging me. I’m amused by these little things.

One of my biggest nit-picks in my original assessment of the Pivo was that I thought the Auto Zoom feature (which had just come out at that point) was a bit too slow to zoom back out. That resulted in parts getting cut off from the frame on occasion, like the horse’s front or back half, or my upper body. Pivo released a new update in early July to address that issue, speeding up the “zoom out” part of the auto zoom. While it’s still a touch slow sometimes, I think its definitely much improved. One really great thing about Pivo is that they definitely DO listen to the feedback that their facebook group generates, and they’re quick to release updates. Like at least once a month, if not more. It’s constantly evolving and improving.

I’m becoming more impressed with Pivo the more I use it. It still can’t compete with a SoloShot or Pixio as far as what it can do, but for how cheap it is in comparison, it’s done an admirable job so far. Really loving this little gadget!