Y’all, I might need an intervention. In the past week I’ve dyed 4 old sunshirts and 2 pairs of riding tights. I’ve done: dingy white to light blue shirt, yellow to merlot shirt, taupe to dusty pink shirt, faded blue to turquoise shirt, gray to eggplant tights, and gray to dark green tights. However, I think I’m perfecting my technique now and getting a good handle on the dyes, because I’m quite pleased with how most of them came out. Last week after I was lamenting about how I wished I had more old sunshirts to dye, I found two more that I had totally forgotten about because I’d tossed them into a “give away” pile last time I went through my closet. I really didn’t like the color of either of them. But now… I could change that!

The blue was super faded, and the taupe one has always been an odd color that I’ve never quite been able to figure out. Sometimes it looked gray and sometimes it looked tan. And I hated how the pink collar/zipper looked with that color. I decided to try to take that one to a dusty pink, since I was already starting out with the “dusty” part, and with the blue one I wanted to go teal.

Since I already had the gray tones from the original color, I just bought pink Jacquard Acid Dye (I learned last week that I thought I preferred the Jacquard colors to the RIT) to go over this one. I put only about 1/3 of the powder into my pot and only left the shirt in for 4 minutes. These Jacquard colors are very pigmented and take to the fabric quickly so I knew I needed to err on the side of caution lest it end up super pink. You can always add more dye to the water or leave the shirt in longer, but you can’t undo it once it’s gone too far.

And I’m super pleased with how this one turned out, it’s pretty much the exact dusty rose color I had in mind. I much prefer it to the original taupe and don’t find myself hating the pink zipper anymore.

The blue one… I wasn’t so happy with. This is totally my fault, because when I bought the dye I kind of forgot just how blue this shirt already was, and I bought a tone that also had far too much blue for what I was trying to achieve when I should have gone much more toward the green side. That was not well thought out on my part.

So while the color definitely came out refreshed and vibrant and turquoise, it’s just… way too bright for my taste. Way too bright. My bad.

So either I can brew up some more pink with what I’ve got leftover and take it toward purple, or I can get some green and see if I can balance it to a darker teal that my eyeballs will find less objectionable. Bright just isn’t my jam so I’m concerned that if I put pink over it, it’ll just be bright purple that I’ll also hate. So… maybe leaning towards the green.

The other big experiment was dyeing my gray Ariat tights. I like these tights a lot, but I just… don’t like the gray. Like at all. However, they are a polyester blend, and polyester requires a different type of dye. It’s also generally more difficult get it to take dye. I had no idea if it would work at all, but hey I’m feeling adventurous right now. So I researched all the poly dyes before I settled on iDye Poly in green. 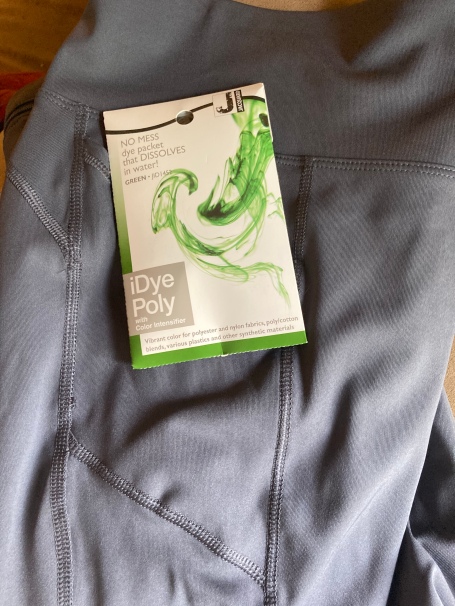 They don’t have a ton of color options (they only had green and kelly green, which look almost the same on my computer screen, the green maybe slightly darker and more subdued than the kelly) so I went with green, hoping that since the tights started off gray, it would add some depth and a little bit of blue tint to the green. But also I was just… mostly hoping that they would take the dye at all, because I’ve never tried to dye polyester. It’s pretty much the same process as nylon though, so it was pretty simple. I will say, this dye STINKS way worse than the other dyes, the fumes were intense. I had to open a couple windows and move a fan to the kitchen to blow the stench out. It also took longer for the polyester to get to it’s full color – I left it in for about 45 minutes. BUT… I’m pretty thrilled with how they came out.

These were definitely riskier, because a) I wasn’t sure it would work, b) while I was pretty confident that the vinyl lettering and silicone would survive just fine, I wasn’t 100% positive. Luckily this worked out great, and no damage was done to the tights at all. After a wash and dry you definitely would never know that these hadn’t started out this way. The color is really nice. I wouldn’t hesitate to dye some polyester again.

So far I’m ridiculously pleased with this whole dyeing experiment. The only “fail” is that I didn’t like the color I picked for the blue shirt, which… can be changed. No harm no foul, just some wasted dye and time.

I will say though, now that I’ve washed the merlot shirt (which was dyed with Jacquard Acid Dye) and the sky blue shirt (which was dyed with RIT) it really just solidified my preference for the Jacquard dyes. The colors are more vibrant, more pigmented, they dye more quickly, and now that I’ve washed each of those shirts 3 times… the merlot isn’t fading one bit. The light blue one, though… already looking noticeably paler. I’ve definitely got to give the edge to the Jacquard. It’s powder instead of liquid, and it requires some vinegar, but the quality is just better IMO.

I have to be honest, I’m not super bummed that the light blue one is fading, because I found myself wishing that I had tried an ombre technique on that one. So now I’m going to re-do it, but with Jacquard, and attempt to ombre it. Why not?

If you’re planning that intervention please wait until I’m finished with that, please.