In the past few (coldish) months I’ve added some things to my line-up that I’m really liking. Or they’re interesting. Or I’m weirdly obsessed with them in ways I can’t quite explain. I talked about my Champion skull cap a couple weeks ago, which I continue to love more and more, but there have been a few other (perhaps less exciting) acquisitions that are worth mentioning too, especially this time of year.

Okay it’s weird that I’m so obsessed with this thing, I admit it, but hear me out. I’ve been hesitant to put up a net in Presto’s stall, because he tends to put his feet in/on everything and turn whatever isn’t firmly tethered into a projectile. But I also didn’t like him eating off the floor, because his hay goes in the outside part of his stall, on the dirt (the inside stall he uses as one giant toilet). I’m trying to minimize how much sand he’s eating, plus that horse can hoover hay like nothing you’ve ever seen. For real, 2 flakes lasts him about an hour. Which meant that on the nights he’s stuck in his stall due to the weather, he was spending the majority of his time with nothing to eat.

Several years ago I had a NibbleNet, which I liked the design of, but the horse (Presto’s mother, actually) destroyed it within a couple months. Considering how expensive it was, I wasn’t thrilled with the longevity. I thought that style might be perfect for Presto though, maybe less likely that he’d put his foot in it or somehow entangle himself in it than a regular hay net. On a whim I tossed in the Tough-1 large size slow feed net on one of my Riding Warehouse orders, since it’s about half the price of a Nibblenet, and I’ve been really thrilled with it. So thrilled that I’m buying another one for Henry, because it’s that awesome.

The net is big, I can stuff 4 flakes in there if I really want to (which I’ve been doing a lot lately, because growth spurt), even though it’s advertised as holding 2-3. The opening at the top has plastic inside the webbing which makes it more rigid, thus easier to open and fill, and lies flatter to stay shut when it’s hung. It has a bunch of d-rings at the top and bottom that give you lots of different options for hanging, which I really appreciated considering that keeping my idiot baby horse’s feet out of it was my #1 concern.

The barn guy loves it because it’s very easy to unsnap and fill while it’s still hanging, no wrestling with a net required. It’s even survived the wrath of Presto totally unscathed so far, which is impressive considering how mercilessly he attacks it with his teeth. It slows down his consumption pretty well too, hay lasts him about 3 times longer than it used to. I generally only use nets in the winter when my horses are stuck inside more, but these are totally worth it anyway. And it comes in purple and teal if you’re into that kind of thing.

Ok these aren’t really new, Henry has been wearing his HUG blankets for 3 years now, and I’ve sung their praises on here before. They’re the only thing I’ve ever found that doesn’t rub Henry’s shoulders bald, and they’ve held up really well. Presto even got a HUG sheet to wear this year, too, even though he’s only worn it like twice because he’s a walking shag carpet and it’s just not that cold. But they went on sale before Christmas and I was going to grab a sheet and blanket for Presto for next season, then I realized he’ll probably be wearing Henry’s size by then, so why not hand down Henry’s old ones to Presto and get Henry some brand spanking new ones? Especially because they had navy. The new ones are really nice, better quality than the old ones, with a few little upgrades in materials. So it’s possible that now I own 5 HUG sheets and blankets. I was never really sure how I felt about the design until I owned some, but if you have a sensitive or hard to fit horse they’re awesome and I continue to love them. 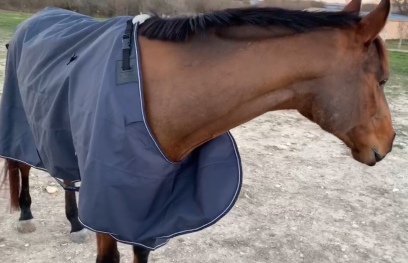 I know, a sweatshirt seems simple, but is there anything better than a soft cozy sweatshirt when it’s cold out? No. No there isn’t. And this one from Levade Kentucky is definitely the softest one I’ve ever owned. Plus it’s horse related! It’s cute enough to not just look like you’re wearing a frumpy sweatshirt, and it’s simple enough to go with pretty much anything, dressed up or down. I’ve worn it to work, to happy hour, and to the barn. It’s quickly become a staple for me, because comfort and warmth rule supreme. Levade is a relatively new, small business, and y’all know how much I like that. Their line will soon be expending to jackets, tights, and a few other items, so I’m interested to see where it goes.

Ok this isn’t really winter-related but y’all. I’m obsessed. I’ve been not-so-subtly dropping hints for a while to Amelia at Dark Jewel Designs that she should make a spiked browband, and she did! I’m testing this one to make sure everything holds up well before they’re offered to the public, and so far I’m really impressed. It’s stunning, and really well made, and I freaking love the spikes.

Really it was meant for punk rock Presto (and he WILL be wearing it at some in-hand shows, have no fear) but Henry is wearing it right now to test it out. I might use it on him for XC anyway, because it’s so awesome, how could I resist? I love the shape, I love the snaps (lets make all browbands with snaps, yes? So easy to swap out.), and it fits on my Lund bridles perfectly. You can’t really tell that they’re spikes until you get up closer, which I love. Subtle badassery. This suits me and my horses so much better than rhinestones. None of us are particularly sparkly.

Do you have any must-have items that you’re really feeling this season?